Why Every Man Should Have This Wallet With a Secret Trick

We carry lots of stuff with us every day: Phones, wallets, backpacks, doubts. As I pulled my charge cards out of my old wallet to squeeze them into the stiff new slots of Nomad’s Leather Battery Wallet, I realized I was about to leave a whole bunch of that stuff behind. That’s because the designers at Nomad decided to sacrifice space for the junk that gets shoved in our wallets but we don’t really need, like lunch receipts, buy-ten-get-one-free cards, and random scraps of paper. In exchange, the Nomad has a feature that’s actually useful: A smartphone-charging battery pack.

A slim wallet with a 2,400mAh battery stitched into its spine, Nomad’s typically-$119 brown leather billfold is a minimalist’s dream, with only five narrow slots in which to keep your cards and cash. Buyers who even moderately Costanza their wallet will need to take a deep breath, because it simply won’t allow you to lug around everything you’re used to. Instead, you’ll have to ask yourself, “What’s more important: my insurance card or getting the eleventh taco free?” It’s an exercise in Marie Kondo-style tidying up.

But those sacrifices immediately pay off the moment your iPhone’s battery hits the red. With an integrated Apple Lightning cable — the Nomad’s killer feature — you’re able to top up your phone’s power in a pinch wherever you are. I’ve recharged on planes, while shopping, and even just laying on my couch to stay powered up all day long.

Most recently, while my iPhone 6s was being plagued by a defective battery, the Nomad wallet cemented itself as my most valuable gadget. When my phone would randomly shut down even with a fully-charged battery, the only way to revive it was to connect it to an electrical outlet before pressing the power button. But with the Nomad wallet’s integrated battery and lightning cable, my iPhone didn’t need a wall plug as a lifeline. I could restart it wherever it shut down, defect be damned.

Along the way, the Nomad wallet’s brown Horween leather has weathered nicely. I typically prefer black accessories because it’s a color that matches everything, but the decidedly non-techy brown color camouflages what’s really a gadget at heart. And as the slots have loosened up, I’ve even been able to slip a few more items into its folds, like a Tile Slim locator beacon and, admittedly, that taco punch card. I don’t miss all the other stuff I used carry around with me, either. When you’ve always got an extra battery on you, there’s no room for doubt. 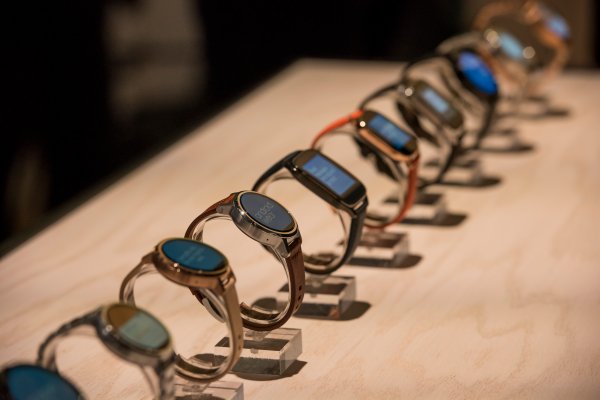 Android Wear 2.0 Review: Just What Google Needs to Compete With the Apple Watch
Next Up: Editor's Pick