Senate Minority Leader Chuck Schumer, a voluble, energetic New Yorker, has expressed a willingness to work with President Trump on issues ranging from infrastructure to tax reform and trade.

But facing rising pressure from the Democratic base, the leader of the Democratic opposition in the Senate said in an interview for this week’s TIME’s cover story that his party is increasingly unlikely to find common ground with the President.

“Right now, it looks like I’m going to be spending more time opposed,” says Schumer. “He’s moving to the hard-right on issue after issue after issue, which conflicts with our Democratic caucus values.”

The country’s most powerful Democrat spoke with TIME at length about his conversations with Trump (“You never know if he’s really paying attention”), his experience on Election Night (“I was distraught”), why Hillary Clinton lost the election (“rightly or wrongly… she stood for status quo”), the growing anger in the Democratic base (“I’m glad it’s there”), and the importance of his role as minority leader.

“If Hillary won and I was majority leader, I’d have more fun, and I’d get more good things done, which is why I’m here,” says Schumer. “But with Trump as President and me as minority leader, that job is far more important.”

Read in this week’s issue of TIME: Inside Chuck Schumer’s Plan to take on President Trump

The segments of the interview published below have been edited and condensed for clarity.

On Schumer’s conversations with Trump:

I did tell him this on the phone early on. I’ve given it to him over a while, and I’ve also said it to a few of his other minions. I said it in public. But I said, “You ran against both Democratic and Republican establishments. If you continue to be against both, you might get something done. But if you let the hard right take you over, you will not succeed as President.” And that is what’s happened. His rhetoric is still populist, but his Cabinet and his moves are hard-right. …

And so that was my advice, and I don’t think they’re taking it. It’s my analysis [that] Pence and Preibus have said, “Let’s mollify the hard-right, let’s win them over,” and the Cabinet is the most hard-right Cabinet I’ve ever seen. It’s also so antithetical to what Trump professed to be for the middle class. We call it a Swamp Cabinet of Billionaires and Bankers. … He acknowledges but you never know if he’s really paying attention. You really don’t know if it’s registered in his head.

I did have a lengthy talk on infrastructure, and this is the one place where I thought I made some—where I saw some push. He said, “A trillion dollars.” I said, “That sounds like a good number.” But I said, “A few things, Mr. President. First, it has to have labor and environmental protections.” I said, “It can’t be this tax breaks.” You know they were talking about doing a private—private public partnership and have deep tax breaks to fund the roads. Can’t be that, for two reasons—I don’t know if I told him both—but one is that you don’t get most things built. And second, they put huge tolls everywhere…

On his family’s connection to Trump:

After World War II, a lot of these immigrant families started building houses. And [my maternal grandfather] built little rowhouses, and Fred Trump was building little rowhouses, too, and they knew each other. I think they had the same lawyer. And they would share supplies occasionally, and things like that. …

[Trump] acknowledged that his father and my grandfather knew each other. And I knew them as landlords. And I did tenant organizing. They were good landlords. I mean Donald—but Fred was the main guy. Fred, he was—I remember seeing on Ocean Parkway [in Brooklyn]. He would drive every day. He had a modest office right near Trump Village in Beach Haven, and he was known for going to a luncheonette and having a tuna fish sandwich. I never saw it happen. But he would drive.

I would see, they’d point out his car. Big black Cadillac and he would be driving it. The license plate was FT. Fred Trump. He had a big black Cadillac. Now they were already wealthy. They lived in Queens, in Jamaica Estates. But they had a lot of apartment buildings in Brooklyn. That’s how they started.

On Trump’s accusation that he shed “fake tears” over the refugee ban:

He said, “I know Chuck well.” It shows he doesn’t know me well. Everyone who knows me knows—[I’m] not as bad as Boehner, but at Harry Reid’s going away, I was tearful. In my caucus I often get teary. And my caucus all knew what B.S. it was when [Trump] said he knew me well.

And the famous story, which I’ve told on occasion, my daughters were about 4 and 8, and I took them to see “Free Willy.” When he escaped, I started to really cry. And they ran out. They were embarrassed. I had to chase after them [out of] the movie theater. So, I—look, but can I tell you something, it doesn’t bother me. When he flattered me, when he calls names, it doesn’t. I have always functioned by an internal gyroscope, my values and who I am, and what I am.

On the growing anger in the Democratic base:

We are remarkably united, from Bernie and Elizabeth to Manchin and Warner—all of whom—you know I expanded my leadership team because I think we need unity. And so far, on the big issues—Cabinet, ACA particularly (Affordable Care Act)—we are united. I think we’ll be united on the Supreme Court. So, what I’m saying here is we will stay true to our values, and I think the overwhelming majority of Democrats will agree with us. …

And look, I respect the people who are upset and angry. I think it’s a great thing for the Democratic Party that there is such fervor. I spent—I intended to speak at the Women’s March because I had to swear in a local elected official. I stayed four-and-a-half hours. I was exhilarated by the strength and passion. And I understand people are frustrated, and if they want to take an occasional shot at me, that’s fine. It doesn’t offend me. But I’m glad it’s there. And our job is going to have to be to work together to prevent Donald Trump from ruining American values.

On writing a new Democratic platform to win in 2018:

We are coming up on it. But I will tell you, what we will have, we did our infrastructure bill already, we’re going to have a sharp-edged bold economic message that will do several things. One, it will unite the Democrats. My goal is to have Bernie Sanders and Joe Manchin—Bernie Sanders and Elizabeth Warren on the one side and Joe Manchin and Mark Warner on the other—support the same 7 proposals. …

It is an economically-focused bold populist message. That’s what we missed [in 2016]. And you know I always said, there were some reasons Hillary lost that were illegitimate. But the one reason she lost that was legitimate that rightly or wrongly, he stood for change, she stood for status quo.

On whether Trump will come to the table with Schumer:

Look, I mean Pence has come and visited me a couple of times. I think Pence is the link to Congress. When he calls, I’ll certainly talk to him and if there’s a need, I’ll call him, but right now, it looks like I’m going to be spending more time opposed. Much more time opposing him. He’s moving to the hard-right on issue after issue after issue, which conflicts with our Democratic Caucus values, and I believe it conflicts with American values. What he’s doing now is not what the American people voted for. …

You know I have been true to my values constantly. He’s all over the lot. And if he comes—it depends on him. Not on us. We’re sticking with our values and as I said, we’re going to fight him when he tramples on those values. We would work with him if he agrees with those values, and the campaign, there were some he did. He’s moving away from all that.

On the night of the election:

I was shocked. Here’s what happened Election Night. Eight p.m., I claimed victory in New York because I was running and then I was going to go down to Washington to be with the DSCC.

But at 8 p.m., I’m waiting in New York, and I see the exit polls, of college-educated women in Florida and North Carolina. I said, “This is trouble.” Because we all thought—and I did—that we’d lose blue-collar but make up for it with the college-educated, particularly women. So I call up one of Hillary’s top people, who I know well, but I’m not going to embarrass that person. And I said, “This is horrible.” They say, “I know, we saw those, but don’t worry. Our firewall in Pennsylvania, and Wisconsin and Michigan is solid, there’s no way we can lose.”

The next day, [Republican House Speaker] Paul Ryan called me to congratulate me—or I called him—I can’t remember. And I said, “Did this take you by surprise, Paul?” He said this unprompted, he said, “At 6:30, I spoke to my top pollster guy. He said, it’s bad news, Paul. Feingold’s going to be your Senator, Schumer’s going to be Majority Leader, Hillary’s going to be President.”

And I realized something, and this has helped guide me, really. This is really part of it. If Hillary won and I was Majority Leader, I’d have more fun, and I’d get more good things done, which is why I’m here. But with Trump as President and me as Minority Leader, that job is far more important. And I realized that. And that’s important. 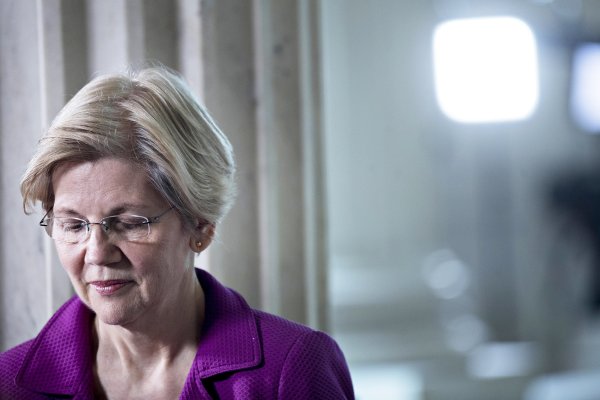 Elizabeth Warren Was Silenced for Criticizing a Senator. But the Senate Is Not Always So Civil
Next Up: Editor's Pick