8 Reasons Why You're Having Joint Pain

“Oh, my aching joints” is more than a cliché. Tens of millions of Americans suffer from joint pain that can sometimes be debilitating. If you have joint pain, your top priority should be to find out what’s behind the tender, aching joints so you can get the right therapies. “Diagnosis is absolutely critical,” says James O’Dell, MD, chief of rheumatology at the University of Nebraska in Omaha. “Start off with your primary care doctor, but if you’re continuing to have a problem, you need to get a rheumatologist.”

Here, eight possible conditions that could be causing aches and pain in your joints.

Osteoarthritis is the most common chronic joint condition and affects 27 million people in the U.S. It occurs when when cartilage—which normally protects the joints—breaks down, causing the bones to rub directly against each other and triggering pain and swelling. Although osteoarthritis mostly affects older people, it can appear in those of all ages. Your risk is especially high if you are obese or have overused a joint (by playing a sport for many years, for example). The knees, hips, lower back and neck, fingers, base of the thumb, and big toe are most often affected.

Activity can also aggravate symptoms: “If it gets worse the more you do and the more you’re up and down after activities of a day, that makes us think more of an osteoarthritis situation and not an inflammatory situation,” says O’Dell. Exercise and over-the-counter pain relievers may help keep you moving.

About 30% of people with the skin condition psoriasis eventually develop psoriatic arthritis. The joint pain, stiffness, and swelling that characterize this condition are the result of an autoimmune reaction in which the immune system mistakenly attacks the joints, causing inflammation. Psoriatic arthritis can affect the finger and toe joints nearest the nail, as well as the wrists, lower back, knees, and ankles.

Symptoms can range from mild to severe and may appear suddenly or gradually. The joints are usually most painful when you wake up in the morning or after a period of resting. There are five different types of psoriatic arthritis, but the most common are asymmetric oligoarticular (when a joint on one side of the body is affected, but not the other) and symmetric polyarthritis (the same joint is affected on both sides of the body).

Psoriatic arthritis is a chronic condition, meaning it never goes away, but it can be managed with drugs and lifestyle changes.

Psoriatic arthritis is often mistaken for rheumatoid arthritis, another chronic autoimmune disease. Rheumatoid arthritis usually affects the small joints in the hand and wrist on both sides of the body. Some people also have bumps, called rheumatoid nodules, that appear under the skin. Like psoriatic arthritis, debilitating pain and stiffness from inflammation usually occur in the morning or after resting, but symptoms can also last all day. Your joints may also be swollen or feel warm to the touch.

Over time, rheumatoid arthritis can affect other parts of the body, such as the lungs (scarring can cause shortness of breath) and blood vessels (inflammation can reduce blood flow). Rheumatoid arthritis patients also have increased risk of heart disease and heart attack. Medications such as nonsteroidal anti-inflammatory drugs (NSAIDs) can ease symptoms, while corticosteroids, DMARDs, biologics, and JAK inhibitors help slow disease progression. And even though it may seem counterintuitive, gentle exercise is also important, since it helps maintain strength and flexibility.

About 90% of people with the autoimmune disease lupus have joint pain, and more than half of patients say it was one of the first symptoms they experienced. In addition to pain, joints can be swollen and feel stiff, tender, and warm. The disease tends to affect the extremities of your body such as the knees, ankles, toes, fingers, wrists, and elbows, and is usually symmetric. Like rheumatoid and psoriatic arthritis, stiffness is often worse in the morning, but symptoms can also show up later in the day.

Although there isn’t a cure for lupus, treatments can help prevent flares and reduce symptoms. And the disease isn’t usually as damaging on the joints as rheumatoid arthritis is. But it’s still important to seek treatment, says O’Dell.

Gout is an extremely painful form of arthritis—in fact, the pain is so acute that it can wake you up in the middle of the night. “It’s extraordinarily painful and debilitating,” says O’Dell. Gout typically affects the big toe, and in addition to causing pain, the toe can also become swollen and hot to the touch. This type of arthritis is caused by high levels of uric acid in the blood(uric acid is the byproduct of purines, which are found in foods like liver, turkey, beer, and red meat). Episodes can last three to 10 days and may be triggered by stress or alcohol. Being overweight also puts you at risk, and men are more likely to have the condition than women.

The good news? It’s also “extremely treatable,” O’Dell says. Avoiding purine-rich foods such as scallops, herring, and red meat may help, as can taking medications to tame the condition.

Joint pain is one of many possible symptoms of the tick-borne illness Lyme disease. While the classic early sign of Lyme is a telltale “bull’s-eye” rash, one of the later symptoms (usually appearing weeks or months after a tick bite) is arthritis and joint pain in the knees and other large joints. Usually only one or two joints are affected simultaneously, and episodes tend to become less frequent and less severe as time goes on. If you think you may have Lyme, it’s important to get an early diagnosis and treatment, as well as ongoing medical care.

Hypothyroidism is the result of an underactive thyroid gland. It is more common in women (especially those over the age of 50), and your risk of developing it may be higher if you have a family history of the disease, are a smoker, or have Hashimoto’s thyroiditis. In some people with the condition, joint pain and stiffness, carpal tunnel syndrome, or swelling in certain joints may occur. Thyroid hormone replacement is usually considered to be the best treatment for hypothyroidism, but over-the-counter pain relievers like ibuprofen can also help.

The chronic pain disorder fibromyalgia affects more than 3.7 million people in the U.S., and can present symptoms such as fatigue, muscle pain, and aches and pain in the joints. Episodes can come and go and may be triggered by physical or emotional stress. You’re more likely to get fibromyalgia if you are a woman between the ages of 40 and 75 and are overweight. People with rheumatoid arthritis or lupus also have a greater risk of developing the condition. There’s no cure for fibromyalgia, but three medications have been FDA-approved to treat the condition, and exercise can also help relieve symptoms. 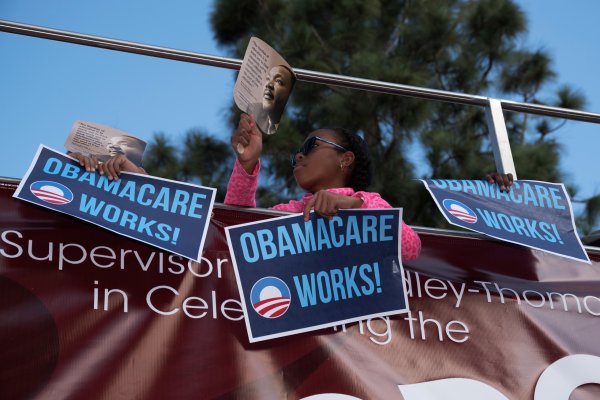 The Obamacare Repeal Is a Money-Grab for the Already Rich
Next Up: Editor's Pick