Arnold Schwarzenegger Is Lucky The Apprentice Ratings Are So Bad

President Donald Trump’s use of the National Prayer Breakfast on Feb. 2 to deliver a dig at Arnold Schwarzenegger’s dismal ratings of The Apprentice seemed to occasion a minor-key version of a recurring phenomenon — sympathy for those the new President attacks. When Trump went after Meryl Streep, Hollywood came to her defense en mass. When he criticized Representative John Lewis for questioning his legitimacy, the civil rights icon’s biography became a bestseller. And now Schwarzenegger has the attention of the nation, at least on Twitter.

Which is too bad. Those of us who are watching The New Celebrity Apprentice have seen Schwarzenegger deliver a strange, ugly performance week after week. In the most recent episode, he criticized and almost fired a female contestant for not smiling. He fired another after telling her she looked “fantastic at your age.” And he delivered multiple monologues about women who have gained weight.

There was more: in the episode’s first challenge, the boxer Laila Ali was asked to defend her performance and did so in a relatively sedate, business-like tone. Schwarzenegger replied: “I don’t see the energy in you, I don’t see the happiness and the joy of doing this.” When Ali reflexively smirked, the host replied, “See the smile you have now? That’s what I like to see, because it represents, ‘I’m happy to fight here in the struggle, to be creative, and to be part of the team.’”

This is unfortunately congruent with behaviors women in the workplace have to endure. But it’s also close enough to the old Trump Apprentice — one that hinged on questions of style vastly more than performance — to really be jarring. The problem is that, when Schwarzenegger really let loose, things got even worse. Asking the WNBA player Lisa Leslie why she hadn’t appeared on-air to promote the fitness equipment instead of TV host Carson Kressley, Schwarzenegger appeared revolted as he asked:

He went on to tell the 44-year-old athlete that she ought to have addressed the female audience, losing his way midthought: “When a woman talks to a woman — you, because of looking so fantastic at your age — every woman looks at you … It’s unbelievable, I’m amazed by that.”

Before firing both Leslie and Kressley, Schwarzenegger continued:

Schwarzenegger’s long, rambling descriptions of the ways in which women’s bodies are unattractive made him more animated than anything else that’s happened this season. Prior to this week’s flurry of gendered discussion, the former California governor has been bluntly incurious about any subject that doesn’t relate back to his bodybuilding days. At times, he comes off as barely engaged. The show marketed itself on the question of what its host’s catchphrase would be. But Schwarzenegger seems to have forgotten it entirely, moving from “You’re terminated” to “You’re fired” at random.

Not that Schwarzenegger isn’t aware there’s something in The Apprentice for him, a brick in the road getting him closer to wherever it is he wants to go. “I have a very clear vision,” he told Ali while explaining why she ought to smile more, “and every rep that I do, every set that I do, gets me one step closer to making this vision turn into reality. That excites me. That makes me so happy.” Happier still for him is that his vision of himself can go undisturbed by anyone actually watching him. 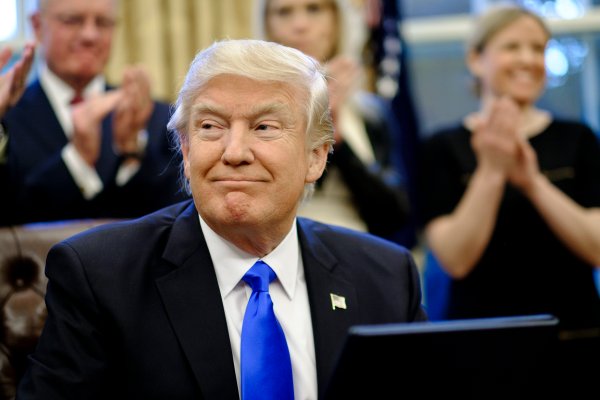 South Park Won't Mock President Trump as Much Next Season
Next Up: Editor's Pick