You Asked: Should I Use a Foam Roller?

After spending decades on the fitness fringes, foam rolling has arrived at center stage. Whole classes are now devoted to the practice of slowly rolling different parts of the body over a tube; it’s thought to improve athletic performance and flexibility, reduce workout-related soreness, slash recovery time and knock out muscle pain.

There’s some research to back up the hype. One recent study in the Journal of Sports Rehabilitation found that foam rolling—coupled with old-school static stretching—could increase range of motion in the hip more than stretching alone. One of that study’s authors, Central Michigan University associate professor Blaine Long, says foam rolling may decrease a muscle’s “viscosity,” which would make the muscle less resistant to motion and therefore more flexible. Another study, this one from Canada, linked foam rolling to less muscle soreness, better vertical leap and greater flexibility. There are dozens more. And while some researchers failed to find benefits, nearly all of those experiments involved less than 30 seconds of rolling—compared to 90 seconds or more in studies that turned up positive results.

How could shimmying on a piece of foam do so much good? Foam rolling is often described as a form of “self-myofascial release” (sometimes known as SMR). “Fascia” refers to connective tissue that binds and stabilizes the muscles. By massaging it—according to the marketing claims—you not only improve your muscles’ range of motion, but you also boost blood circulation, break down tightness or knots in your muscles and bolster muscle tissue integrity.

But here’s the rub: researchers who have found foam rolling to be effective don’t believe it has much to do with SMR—at least not when it comes to reducing pain and soreness. Citing research from Germany, David Behm, a professor of human kinetics at the University of Newfoundland, says that “to have any effect on fascia, you would need much higher forces than a human would typically be able to exert on themselves.”

Behm coauthored the Canadian study linking foam rolling to less soreness and better performance. He says that, in two of his experiments, people who foam rolled one leg also, surprisingly, knocked out muscle pain in the other. “We didn’t even have to touch the painful muscle [with the roller],” he says.

Foam rolling may fire up your central nervous system, Behm says, which registers and reacts to pain. Your nervous system also regulates many of your body’s unconscious functions like heart rate and blood flow. Some research from Japan has backed up this idea by linking foam rolling—independent of exercise—to improved arterial flexibility and vascular function.

Like massage, another practice linked to lower pain and muscle soreness, foam rolling stimulates pressure receptors beneath your skin, says Tiffany Field, director of the Touch Research Institute at the University of Miami. “When you stimulate those pressure receptors, that stimulation increases vagal activity in the brain, which has been linked to relaxation of the nervous system, reduced levels of stress hormones like cortisol and improved pain tolerance,” she explains.

In other words, foam rolling may be knocking out stress and quieting your body’s pain-detection centers, instead of loosening your muscles.

“There is still a lot of info about foam rolling the literature might not be telling us,” says Disa Hatfield, interim chair of kinesiology at the University of Rhode Island. Regarding foam rolling’s ability to improve flexibility and performance, Hatfield says, “One issue I have with many of these studies is the control group either did nothing or they did some passive stretching.” She says foam rolling may be akin to other types of dynamic stretching—stuff like light jogging or leg swings, which also improve range-of-motion and performance. Her own research compared foam rolling to planking before a workout. The foam roller group “perceived” their workouts to be easier. But that perception didn’t translate to performance gains, she says.

To sum all this up, foam rolling deserves its good reputation—though maybe not for the reasons many fans and trainers assume.

Two to three sets of foam rolling lasting between 30 and 60 seconds—that’s per muscle, not total—seems to be effective at reducing pain and improving flexibility, Behm says. Roll before exercise if you want to boost range of motion or performance. A post-workout roll is good for preventing soreness, he says.

Best of all, you can ditch your “no pain, no gain” mentality to rolling. Behm found that rolling at 50%, 70%, and 90% of a person’s pain threshold resulted in similar benefits. 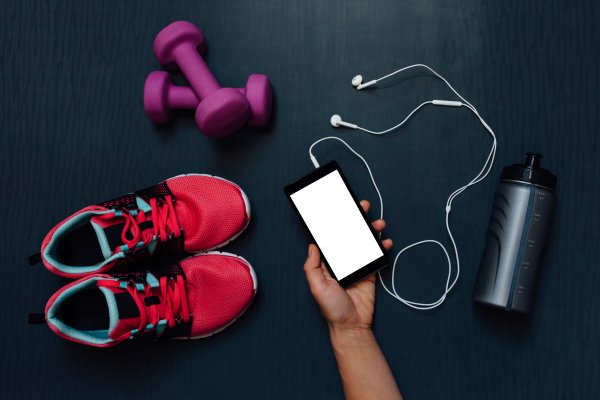 Your Smartphone May Be Sabotaging Your Workout
Next Up: Editor's Pick