Why Doomsday Is Closer Than You Think

Two and a half minutes to midnight. That’s the new setting of the Doomsday Clock, the iconic symbol that attempts to show just how close humanity is to inadvertently ending the world. In an announcement this morning, the Science and Security Board of the Bulletin of the Atomic Scientists—which runs the Doomsday Clock—moved the hands of the clock 30 seconds nearer to midnight, the closest it has been since 1953, when the Soviet Union and the U.S. exploded their first hydrogen bombs and the threat of worldwide nuclear annihilation seemed very real. And the decision was made in part because of the words of a man who has been President for less than a week: Donald Trump.

Read More: 50 Years Ago This Week: Worry Over Climate Change Has Already Begun

“Words matter a lot, especially when the risk of nuclear accidents is so high,” said Thomas Pickering, the co-chair of the International Crisis Group and a veteran U.S. diplomat, at a Washington press conference this morning. “Nuclear rhetoric is now loose and destabilizing.”

The Doomsday Clock was first unveiled 70 years ago, when the artist Martyl Langsdorf was asked to create the first ever magazine cover for the Bulletin, an academic journal that covers global security and technology. When it was published, less than two years after the nuclear bombings of Hiroshima and Nagasaki, atomic war was by far the biggest threat to the planet, and the Clock—with its ominous implication that humanity was in a race against time to save itself—reflected that.

But it has since grown to include other so-called existential risks, including climate change, biotechnology and artificial intelligence. The continued growth of those threats also played a part in the Bulletin‘s decision to move the clock 30 seconds closer to midnight.

The Clock is a triumph of iconography more than science, a symbol of the danger that human technology in its broadest sense poses to humans. It is meant to move the public to action—not to accurately represent how close humanity is to doomsday—which, unless you can see the future, isn’t calculable anyway. Better to think of the Clock as an indicator of trends, not a measurement of absolute risk—and few people would argue that the world hasn’t gotten at least 30 seconds more dangerous during 2016, a year that saw the election of an unstable global actor in Trump, and was the hottest on record to boot.

“Our world is facing threats we didn’t face sixty or seventy years ago,” said Lawrence Krauss, a theoretical physicist and the chair of the Bulletin‘s Board of Sponsors. “There are a slate of things that we need to face with our eyes wide open.”

Moving the Clock 30 seconds, rather than a full minute or more, was a first as well, meant to reflect the fact that while Trump’s words on the campaign trail raised the specter of a renewed arms race—Trump tweeted in December that the U.S. must “greatly strengthen and expand its nuclear capability until such time as the world comes to its sense regarding nukes”—it was too early to know exactly what he would do as President. “It is now only six or seven days of the Administration, and actions speak louder than words,” said Krauss. “We want to send a message that things are not going in the right direction.”

The U.S. and Russia—which together possess more than 90 percent of the world’s atomic weapons—have been at loggerheads over Ukraine, Syria and the alleged Russian hacking of the U.S. presidential election. North Korea conducted two underground nuclear tests last year, and claims it is read to test an intercontinental ballistic missile. India and Pakistan, two nuclear-armed rivals that have already fought several conventional wars, experienced renewed tensions over disputed territory in Kashmir. And after years that saw the global nuclear arsenal slashed, major nuclear powers—foremost among them Russia and the U.S.—have embarked or are considering modernization programs for their weapons. It’s a dangerous time to be alive.

Still, while the world may feel as if it has spun out of control, there’s no doubt that we were in much greater danger during the darkest days of the Cold War. In fact, a quick survey of the history of nuclear weapons shows that humanity has been incredibly lucky to survive this long—and not so much because of decisions by leaders of the U.S. or the Soviet Union, but because of repeated, near-miss accidents. Last year my TIME colleague Simon Shuster interviewed Stanislav Petrov, a former Soviet military officer who in 1983 essentially saved the world when the Soviet Union’s early-warning systems showed detected an incoming missile strike from the U.S. Petrov was on duty that morning, and he should have alerted his superiors, who in turn would have had minutes to decide whether the U.S. launch was real, and whether to fire back, which would have led to nuclear holocaust.

But—putting his career at risk—Petrov decided that the alert must be a false alarm, and decided not to report it. He was right—and the rest of us are still around. “We escaped the Cold War without a nuclear holocaust by some combination of skill, luck, and divine intervention,” wrote General George Lee Butler, the former head of U.S. Strategic Command, in his memoir Uncommon Cause. And I suspect the latter in greatest proportion

Eric Schlosser’s sobering book Command and Control details dozens of such near-misses through the Cold War—on both sides. And while controls have improved since the day in 1960 when the computer at the North American Air Defense Command mistook the moon rising over Norway for a missile attack from Siberia—that actually happened—even today’s much smaller nuclear arsenals are kept on a hair trigger that raises the chance of an accidental or mistaken launch. In a piece for the New Yorker last month, Schlosser noted that nuclear systems in both countries face entirely new risks: “malware, spyware, worms, bugs, viruses, corrupted firmware, logic bombs, Trojan horses, and all the other modern tools of cyber warfare.” Even putting aside questions about the fitness and emotional state of the people now in control of the world’s nuclear weapons, the nature of the systems themselves put us at grave risk.

Today the Doomsday Clock is meant to reflect more than just the threat of nuclear weapons. Climate change is considered a major risk as well, and while the record on 2016 was somewhat optimistic—work on the Paris Agreement to reduce carbon emissions and continued and renewable energy kept growing—we’re not doing anywhere near enough to avert a dangerously warm and unstable future. And there are the less calculable risks of new technologies—artificial intelligence, biohacking and more. “Technologies are evolving in ways that are changing at an incredible rate,” said Krauss—and that by itself, he implied, is dangerous, especially because our ability to regulate those technologies isn’t remotely keeping pace. (And indeed, with a climate skeptic in the White House, may actually be going backwards.)

Including those newer threats, though, risks muddying the pure symbolism of the Doomsday Clock. As Will Boisvert wrote for the Breakthrough Journal last year, climate change is a poor fit for the Clock:

None of this is to say that climate change isn’t an existential threat—just a very different one than a nuclear holocaust. While the nature of nuclear war makes it an either/or threat, climate change presents a range of outcomes that will depend on our actions today, tomorrow and every day after. It’s a wickedly complex problem—even more so than nuclear game theory.

One of the benefits of the end of the Cold War, and the lessening of the risk of nuclear war, is that we’d finally have the time as a planet to focus on the threat of global warming, among others. But with a new man in the White House and old tensions on the rise once more, it turns out we may have less time than we think. 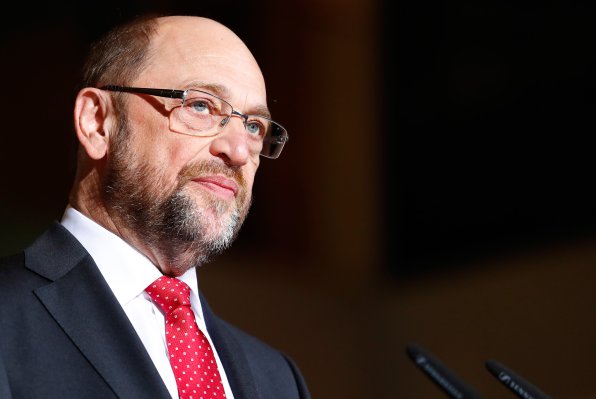 Angela Merkel's New Challenger On the Left May End Up Helping the German Right
Next Up: Editor's Pick