President Trump still believes that 3 to 5 million people voted illegally in the 2016 election, despite the absence of any independent proof to those incendiary claims.

“The president does believe that,” White House Press Secretary Sean Spicer told reporters Tuesday, a day after the president brought up the claim to congressional leaders as he recounted his electoral win argued that his 3 million vote loss in the popular vote on fraud. “He continues to maintain that belief based on studies and evidence that people have presented to him,” Spicer added.

“There’s been studies,” Spicer continued when asked to justify the president’s claim. “There was one that came out of Pew in 2008 that showed that 14 percent of people who had voted were non-citizens. There’s other studies that have been presented to him. It’s a belief he maintains.”

But Spicer’s comments apparently misinterpreted and interpolated at least two election studies. The 14 percent figure appears to come from a much-maligned study on the 2008 and 2010 elections published in 2014, which claimed that 14 percent of non-citizens claim to have been registered to vote. A separate Pew study considered incidences of deceased people remaining on voting rolls, and called for a modernization of the voter registration system.

Fact checkers have repeatedly knocked down claims of voter fraud at anywhere near the level Trump has claimed, while acknowledging individual instances happen and are occasionally prosecuted. Trump’s own attorneys argued during recount proceedings in Michigan last year that “all available evidence suggests that the 2016 general election was not tainted by fraud or mistake.”

Trump’s continued belief runs counter to the widespread rejection of those claims from members of his own party, including Speaker of the House Paul Ryan, as well as Secretaries of State from around the country. “I’ve seen no evidence to that effect. I’ve made that very, very clear,” Ryan told reporters Tuesday.

Spicer rejected the notion that Trump remains sensitive about losing the popular vote by nearly 2.9 million votes, or 2.1 percent of votes cast. “He’s very comfortable with his win,” Spicer said, when asked whether Trump would seek an investigation into the supposed illegal votes.

Upon being pressed by reporters on why, if the president believes such a massive fraud occurred, would he not order an investigation, Spicer offered, “Maybe we will.”

When a reporter asked Spicer about the effects of Trump’s claim on democracy, Spicer, who had tangled with the reporter over several questions on the subject, replied, “It means I’ve answered your question.” 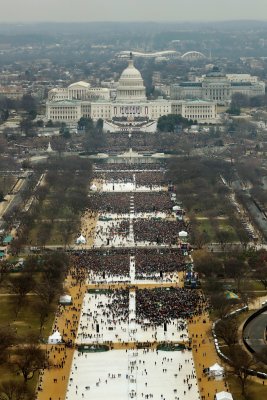 Donald Trump Plans to Hang an Inauguration Photo in the White House Press Hall. It Has the Wrong Date
Next Up: Editor's Pick