Massachusetts Democratic Sen. Elizabeth Warren — who was a consistent and vocal critic of Donald Trump during his presidential campaign — denounced the new President’s policy proposals again on the day after his inauguration, which she described as a sight “now burned into my eyes forever.”

“Yesterday, Donald Trump was sworn in as president. That sight is now burned into my eyes forever,” Warren told people gathered at the Boston Women’s March for America, the city’s version of the Women’s March on Washington, which took place simultaneously in the nation’s capital. “And I hope the same is true for you — because we will not forget. We do not want to forget. We will use that vision to make sure that we fight harder, we fight tougher, and we fight more passionately than ever — not just for the people whom Donald Trump supports, but for all of America.”

“We can whimper, we can whine, or we can fight back. Me? I’m here to fight back,” Warren added. “We come here to stand shoulder to shoulder to make clear: We are here, we will not be silent, we will not play dead, we will fight for what we believe in.”

Hundreds of thousands of women and men descended on Washington, D.C., and cities across the country for marches a day after Trump was sworn in as the 45th President of the United States. 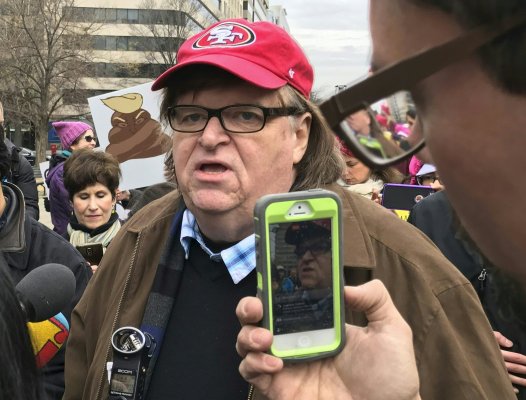 Michael Moore Rips President Trump—and a Newspaper—at the Women's March on Washington
Next Up: Editor's Pick