The Same Donald Trump From the Campaign Spoke at Inauguration

People do not change, not really, especially not a 70-year-old billionaire who has done things his own way his whole life. No one should have expected that Donald John Trump would start reading from a brand new script because he had just placed his left hand on the Lincoln Bible and uttered the 35-word oath that inaugurated him as the 45th U.S. President.

And yet it was still striking to witness Trump use his first historic moment as President to deliver an uncommonly dark address studded with the same themes that dominated his campaign. Surrounded by all the pomp and pageantry that American democracy can muster—the ruffles and flourishes, the 21-gun salute, the joint chiefs and the diplomatic corps over his shoulders, the crowd of supporters stretching down the National Mall—he delivered a speech that signaled his intent to govern in the same key as his campaign.

In his first words to the American people as President, Trump hewed to the populist message that marked his march to victory. At a time of steady economic growth, he described a nation beset by pain, with “rusted-out factories scattered like tombstones across the landscape.” A squeezed middle class. Failing schools. Neighborhoods blighted by crime, drugs and gangs. “This American carnage,” President Trump intoned, “stops right here and stops right now.” Standing where Franklin Delano Roosevelt once proclaimed that “the only thing to fear is fear itself,” Trump described a dystopian country with plenty to fret about.

This grim assessment of the state of the nation was the heart of his sixteen-and-a-half minute address, just as it always been at the heart of his appeal. You might not recognize the dystopian nation the new President was describing. But if you believe it is midnight in America, you will be more loyal to the leader who promises a new dawn.

Trump echoed the father of American populism, Andrew Jackson, another real-estate developer who swept to the presidency by promising to unleash the power of the proletariat. His inaugural address was anchored by the same populist themes.

If you feel like one of the “forgotten men and women” in Trump’s army, that promise is a powerful one.

Sending a message to world capitals, Trump vowed to fulfill his campaign promise to rethink the nation’s foreign policy.

“From this day forward, a new vision will govern our land. From this moment on, it’s going to be America First,” the new president said. “Every decision on trade, on taxes, on immigration, on foreign affairs, will be made to benefit American workers and American families.”

Trump, who has pledged to seek a closer relationship with Russia, laid out a high marker for his Administration in the fight against ISIS. “We will reinforce old alliances and form new ones,” he said, “and unite the civilized world against radical Islamic terrorism, which we will eradicate completely from the face of the Earth.”

The address was heavier on religious imagery than a typical Trump speech. And there were conspicuous nods to national solidarity. Twice Trump addressed “all Americans.” He spoke of a unified nation, sharing “one heart, one home, and one glorious destiny,” ready to “rediscover our loyalty to each other.” After a bitter campaign that exposed and deepened America’s racial fault lines, the new President pleaded for harmony. “When you open your heart to patriotism, there is no room for prejudice,” Trump said. “Whether we are black or brown or white, we all bleed the same red blood of patriots.”

Yet apart from these grace notes, it was a speech that Trump could have given at a Rust Belt arena before a cheering crowd last September. There were the same promises to bring back wealth and bolster the borders, the same promise to use the ultimate seat of power to do things, not just talk about it. “Now arrives the hour of action,” Trump promised. He concluded with the same peroration that marked almost every campaign speech, capped by the same promise to “Make America Great Again.”

It has gotten him this far. Now the nation will find out whether a campaign slogan can translate into a governing agenda. 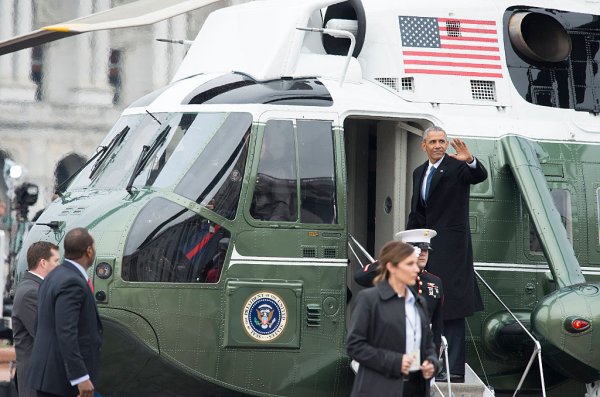