Donald Trump's National Celebration of Patriotism Won't Be the First

Though he had previously said that he would consider Monday his “day one” as President, Donald Trump didn’t just relax on Friday afternoon following his Inauguration. As his press secretary tweeted, one of the three items he signed almost immediately following the Inauguration was a proclamation for a National Day of Patriotism. The proclamation—which, unlike an Executive Order, is basically an awareness-raising mechanism—followed on the heels of a day focused on patriotism.

“When you open your heart to patriotism, there is no room for prejudice,” Trump said in his Inaugural address.

This is not the first time a national period of patriotism has been called for by presidential proclamation. For example, the third week of February in 1981 was, by proclamation of outgoing President Jimmy Carter, declared National Patriotism Week. And in 1982, President Ronald Reagan continued that idea, proclaiming that same week of February “a special opportunity to consider the meaning of an honorable term which has sometimes been misunderstood and misused” and called upon schools to address the topic in class. In both of those cases, the proclamations signaled approval of Congress’ prior designation of the week in question. (When exactly Trump’s Day of Patriotism will fall, among other details about the proclamation, is unknown; the text was not immediately released.)

But encouraging patriotism can quickly get into controversial territory.

In 1924, President Calvin Coolidge had proclaimed a week in November to be American Education Week. Each day during the week was going to have a theme, and on that day students would hear speeches on the topic. One of the days the theme of Patriotism Day, on which students would be specifically taught that “The United States Flag is the Living Symbol of the Ideals and Institutions of Our Republic” with special attention to the need to “stamp out revolutionary radicalism” and remember the words “America first”—appropriately in this instance, a historically complicated phrase to which Trump has turned again and again.

On Nov. 4, the Washington Post reported that organizations like the YWCA, the ACLU and others would not cooperate with the Bureau of Education’s program because “certain elements” were “inconsistent” their their positions “in regard to world peace and international cooperation.” By Nov. 9, the Post followed up that the President of the Bureau (which was then part of the Department of the Interior) had had to issue a statement defending the idea, saying that the board wished to “give every encouragement to patriotism”—but the organizations that were unhappy with the Education Week slogans would come up with their own counter-curriculum anyway.

The next year, the American Federation of Teachers tried to make sure that 1925’s equivalent week was not quite so political.

Patriotism Day in 1924 is hardly the only time in American history when expressions of love of country have caused citizens to clash with one another, but it handily illuminates why such tension can so easily come about: different Americans interpret the idea of patriotism differently. Perhaps that’s why a proclamation like Carter’s is studiously vague, emphasizing that it is important to care about one’s country, and that schools should come up with an “appropriate curriculum” of their own in order to teach students about that idea, without specifying the exact details of what that lesson plan would include.

By 1927, Coolidge specifically refused to issue a fresh proclamation on American Education Week, with or without Patriotism Day, explaining that he had already said what he wanted to say about it and that “to rephrase such sentiments,” as an aide put it, “tends rather to weaken them than otherwise.” 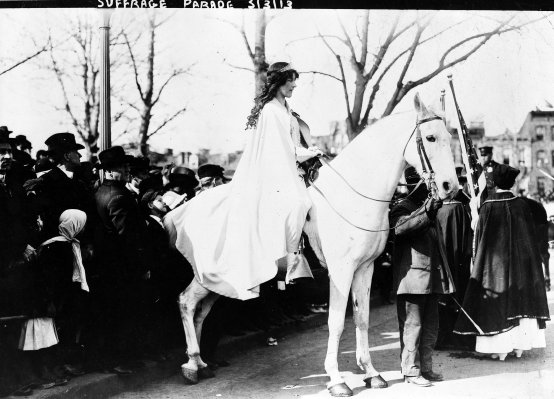 4 Protests to Know About Before the Women's March on Washington
Next Up: Editor's Pick