Donald Trump Sworn In as the 45th President of the United States: 'The Time for Empty Talk Is Over'

After running a bruising and unprecedented campaign, Donald Trump was sworn in as the 45th President of the United States on Friday.

His inaugural address repeated the populist message that helped him win the election.

“Today, we are not merely transferring power from one administration to another, or from one party to another, but we are transferring power from Washington D.C. and giving it back to you, the people,” Trump said after taking the oath of office, administered by Supreme Court Chief Justice John Roberts. “The establishment protected itself, but not the citizens of our country. Their victories have not been your victories. Their triumphs have not been your triumphs.”

His speech, which ran less than 20 minutes, stressed a nationalistic policy focused on America and working people. As he did during his campaign, Trump painted a bleak picture of America’s economic standing and warned that the country’s borders must be protected “from the ravages of other countries.”

Trump’s speech focused little on healing the lasting divisions of the presidential campaign—made evident by protesters gathered in the nation’s capital to demonstrate opposition to the incoming president.

“The crime and the gangs and the drugs that have stolen too many lives and robbed our country of so much unrealized potential—this American carnage stops right here and stops right now,” he said.

Former Secretary of State Hillary Clinton—who was defeated by Trump in a tight presidential race—attended the inauguration with her husband, former President Bill Clinton.

“I’m here today to honor our democracy & its enduring values. I will never stop believing in our country & its future,” she said in a tweet shortly before the ceremony began.

Bill Clinton was among several previous commanders-in-chief in attendance, including former Presidents Jimmy Carter and George W. Bush. Former President George H.W. Bush could not attend due to health concerns.

“The time for empty talk is over,” he said. “Now arrives the hour of action.”

Trump’s inauguration was preceded by Mike Pence’s swearing-in as Vice President with an oath of office administered by Supreme Court Justice Clarence Thomas.

Missouri Sen. Roy Blunt, chairman of the Joint Congressional Committee on Inaugural Ceremonies, praised the peaceful transition of power in his opening remarks, describing the historic event as “not a celebration of victory, but a celebration of democracy.” His remarks were followed by invocations from several religious leaders.

New York Sen. Chuck Schumer also spoke at the ceremony. His remarks stood in contrast to much of Trump’s rhetoric during the divisive presidential campaign, as he stressed that Americans are united—”whatever our race, religion, sexual orientation, gender identity, whether we are immigrant or native-born, whether we live with disabilities or do not, in wealth or in poverty.”

Shortly after the inauguration, Trump signed executive orders formally nominating members of his cabinet and a waiver allowing retired Marine Gen. James Mattis to serve as defense secretary despite a law that would have required him to be out of active military duty for seven years. He also signed a proclamation creating the National Day of Patriotism.

Trump and First Lady Melania Trump spent the morning participating in the traditions that coincide with every presidential inauguration, visiting the White House for tea and coffee with the Obamas, who have sought to emphasize the importance of a peaceful transition of power.

The Obama administration spent its final hours in the White House readying their former offices for the complex task of preparing 1600 Pennsylvania Avenue for a new president, as Obama concluded his round of farewells.

He made a final visit Friday morning to the Oval Office, where he left a parting letter to Trump on the Resolute desk—a presidential tradition. Asked if he had any final words for the American people, he said only, “Thank you.”

Hours later, Trump concluded his speech—his first as president—with a promise to the American people.

“From mountain to mountain, from ocean to ocean, hear these words: you will never be ignored again,” he said. “Your voice, your hopes and your dreams will define our American destiny.” 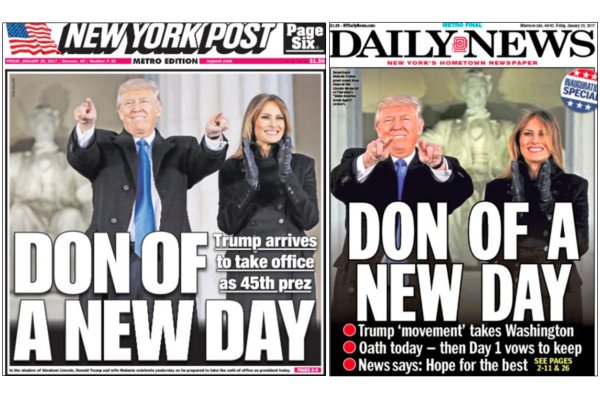