Donald Trump holds a piece of ribbon next to his wife Melania Trump, right, and his son Eric Trump during the grand opening ceremony of the Trump International Hotel in Washington, D.C., U.S., on Wednesday, Oct. 26, 2016.
Andrew Harrer—Bloomberg /Getty Images
Ideas

Let’s be honest. Conflicts of interest are boring.

The President knows this. In fact, he’s banking on it.

Instead of addressing his conflicts in a meaningful way at his press conference last week, Donald Trump pointed to a stack of folders behind him. He then turned the press conference over to a lawyer, who talked about Trump’s plans for long enough for viewers to lose interest. It sounded official and complicated, even though it’s an embellished version of his November announcement to turn the business over to his children.

Many condemned Trump’s plan to handle his myriad conflicts of interest as president as wholly inadequate, including the director of the U.S. Office of Government Ethics.

But most likely, Trump will get away with it — for now — and continue to ignore the warnings of government ethics officials, tasked with preventing things from going terribly wrong.

For decades, they’ve been so successful at preventing a major government ethics scandal, Trump’s conflicts of interest now seem academic and even soporific to the average voter. Unfortunately for Trump, his unwillingness to listen makes a disaster much more likely. On the upside, a scandal would at least remind Americans why ethics-based precautions matter.

Trump’s plan consists of handing management of the family business to his sons, Don and Eric, and a current Trump executive. Trump pledges not to discuss business with his sons.

Trump will not be divesting his golf clubs, commercial properties, resorts, hotels or royalty rights. The plan also provides for no “new” foreign deals, though new domestic deals will be permitted subject to a “vetting process.” Existing foreign and domestic deals will presumably continue.

Walter Shaub, who directs the Office of Government Ethics, condemned Trump’s plan as “meaningless.” Turning over management of the business to others — especially his own children — is not a “blind trust” because Trump “knows what he owns.” Trump’s own attorney used this fact as an argument that nothing could be done about the conflict.

Shaub disagreed. If Trump divests his assets and places them in a blind trust — meant to prevent an elected official from making decisions that would benefit his or her own business interests — he won’t know what he owns. The independent trustee would make decision about selling assets and which assets to buy in their place. Under the government’s standard blind trust agreement, the trustee wouldn’t tell the president which assets are in the trust.

Much ado about nothing?

It’s certainly unusual, but, as with all things Trump, we’re in uncharted waters.

For some Trump supporters, all of this ethics criticism feels alarmist and exaggerated. One explained to me that these conflicts of interests are all hypothetical and abstract. Nothing terrible has happened yet. He argued that Trump’s potentially problematic behavior thus far — like his business-related inquiries of the Argentinian president or complaints to Brexit leaders about wind farms near his golf course — is small potatoes compared to other national priorities.

This reaction is understandable. It’s hard to imagine a giant presidential ethics scandal because there hasn’t been one since the Nixon administration. Why worry?

Anyone in the business of prevention understands this challenge. In “The Black Swan,” Wharton scholar Nicholas Nassim Taleb described the most “mistreated heroes” as those “we do not know were heroes, who saved our lives, who helped us [by] avoid[ing] disasters.”

Taleb presents the thought experiment of a hypothetical legislator who passed a law requiring that cockpit doors be locked as of Sept. 10, 2001. Yes, the legislator would have succeeded in preventing a terrorist attack. But he would also erase the proof that his legislation was valuable.

William Ruckelshaus, a Republican and the first Environmental Protection Agency administrator, summed up the problem nicely:

Conflicts of ethics rules serve as preventative measures, as Shaub pointed out.

Blind trusts make conflicts of interest impossible because government officials both no longer have control of the assets and don’t know what they are. It is impossible to be influenced by ownership of an unknown asset.

All of the presidents since the Watergate scandal have acted as though the Ethics in Government Act of 1978 applied to them, even though technically it doesn’t.

In a sense, the entire Executive Branch has been vaccinated against conflicts of interest for the last 40 years. That is until now, with an incoming president who stated repeatedly during his press conference that conflict of interest rules don’t apply. So maybe we’re due for a scandal?

Sometimes, retrenchment can be helpful to the cause of prevention. In 2015, a measles outbreak at Disneyland led to an increase in vaccination rates. Trump’s unprecedented conflicts of interest could do the same for Washington, spurring a renewed push to bind the president to higher ethical standards.

As it stands, Trump’s failure to address his conflicts means that he remains exposed to the possibility of a full-blown conflicts-of-interest scandal. All it would take is for President Trump to have another conversation with British politicians about those pesky wind farms near his golf course in Scotland, this time from the Oval Office.

Yes, it would be a blow to the office of the presidency. But on the upside, it would — to borrow the President’s favored phrase — make ethics great again. 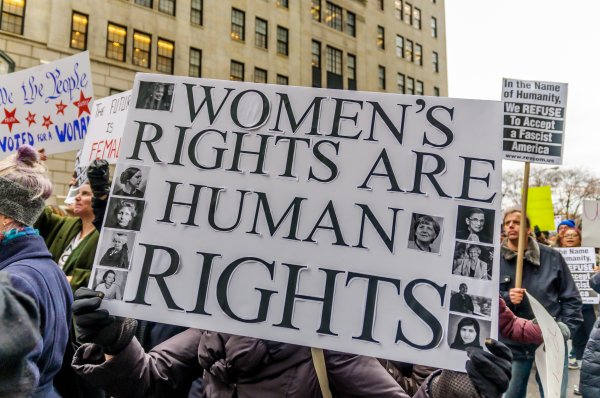 Watch Live: The Women's March on Washington
Next Up: Editor's Pick