Nintendo Switch: Everything You Need to Know

Nintendo president Tatsumi Kimishima took the stage at the outset to reveal that Switch will launch globally on March 3, 2017 for $299.99—earlier than some had expected at the price many suspected.

Company director Shinya Takahashi followed with a history of Nintendo’s platforms illustrating how Switch is in effect a composite of everything the company’s been working toward for decades: a game system you can dock with a TV, but also removed to go mobile, and attach a pair of left and right controllers—called Joy-Cons—that let you play anywhere. Motion sensitivity? Check. Family-friendly software? Check. Beloved Nintendo franchises? Check, several times over.

The system has three basic “modes.”

“TV Mode” is your classic set-top with a big screen. “Tabletop mode” lets you bump out the Switch’s rear kickstand and play holding the detached left and right Joy-Cons in either hand, or lend one to a friend and if turned sideways, they work like standard controllers. “Handheld mode” lets you clip the Joy-Cons to the Switch screen and play anywhere you like.

The Joy-Cons have all the standard gamepad features, including analog thumb sticks, face buttons (A, B, X, Y), left and right buttons, and a square button that’ll let you grab screenshots (and in the future, video) to share online.

They also (as suspected) have gyroscopes and accelerometers, just like the Wii Remote. But they also apparently have advanced internal “rumble” haptics, which Nintendo demonstrated by suggesting you’d be able to distinguish between the feel of ice tumbling in a glass (by shaking the Joy-Con), or the altogether different vibrations of someone pouring water into it.

Here’s what it’ll come with:

Out of the box, you get the Nintendo Switch Console, a left and right Joy-Con, Joy-Con wrist straps, the Joy-Con grip, the Nintendo Switch Dock, an HDMI cable and an AC adapter. And there will be two models at launch, one with gray Joy-Cons controllers, and another with one neon blue and one neon red controller. (Price is the same for either.)

The Pro controller, additional Joy-Cons, docks and other accessories will be available separately.

The technical specifications we have officially so far are:

Nintendo says the Switch screen is 6.2-inches, multitouch capacitive and runs at a resolution of up to 1280-by-720 pixels. It has 32 GB of internal storage, Wi-Fi, a USB Type-C connector, and supports up to eight Nintendo Switch players (squaring off with discrete systems) in proximity to each other.

Switch’s battery life is comparable to the Nintendo 3DS’s.

Nintendo says the Switch’s battery life lasts 2.5 to 6.5 hours (game depending), and you can play while charging the system with the USB connector. A demanding title like the upcoming Zelda should drain the battery fully in about 3 hours.

Switch accessories can be pricey.

Nintendo revealed a handful of prices for some of its official Switch accessories, including:

Crazy but true. Nintendo, long known for its zealous pursuit of compartmentalizing global “regions,” is making the Nintendo Switch “in general” region-free. That means players will be able to buy a game in, say, Europe then play it on a Switch purchased in the U.S.

The Legend of Zelda: Breath of the Wild is a launch game.

But some other Nintendo favorites won’t be.

Nintendo showed a new Mario—Super Mario Odyssey—and previewed Splatoon 2 for Switch. Neither will be available until later this year.

A bunch of third-party games are coming to the platform too.

In rapid fire, Nintendo showed off third party games including:

The Switch’s online service will be available for free after launch. But in a new move for Nintendo, it will become a paid service in the third quarter of 2017. The service will allow users to play online matches as well as find and add friends. The price was not revealed.

Looking to place a pre-order for the Nintendo Switch? It’s likely to be a hot commodity, but you can try Amazon, Best Buy, Walmart, Target or GameStop. 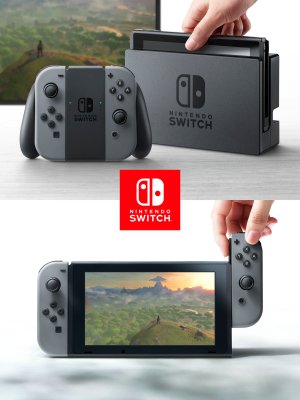 This Is When You Can Buy the Nintendo Switch
Next Up: Editor's Pick