How the First Martin Luther King Jr. Day Was Celebrated

Monday marks Martin Luther King, Jr. Day, a holiday that had a rocky path to establishment.

Although King was assassinated in 1968, legislation designating the third Monday in January—near his Jan. 15 birthday—as a legal holiday to honor him did not pass until 1983. The first year the U.S. observed the holiday was 1986, when the day fell on Jan. 20.

That Monday, people across the country held marches and church services to celebrate King’s legacy, as shown by this 1986 ABC News report. In California, a freedom train ran from San Jose to San Francisco to honor King, while thousands marched in Birmingham, Ala.

As TIME reported in January of 1986, the candlelight vigils, concerts, readings, teach-ins and religious services held throughout the country served as “occasions to recall one of the most painful and dramatic eras of American history.”

“There is a heightened awareness of him that was not present before the holiday,” King’s widow, Coretta Scott King, told TIME.

King’s hometown of Atlanta, Ga., was the stage for big celebrations—visitors from all corners of the U.S. traveled to march in a parade along with civil rights leaders and King’s family. George H.W. Bush, vice president at the time, joined Coretta Scott King to place a wreath on King’s tomb and for a ceremony at Ebenezer Baptist Church, where King served as co-pastor until his death. During the ceremony, Coretta Scott King awarded Desmond Tutu with the King Peace Prize for his work against Apartheid.

But not every part of that day in 1986 was a celebration of King’s legacy: as the ABC report noted, some places were openly hostile to the holiday. In Buffalo, N.Y., a sculpture of King was whitewashed.

And the road to a national commemoration of Martin Luther King Jr. was not yet complete: At the time the federal bill took effect, not every state observed the holiday. For example, House Republicans from Arizona, including Sen. John McCain, had voted against the bill in 1983, and the state only voted in favor of recognizing the holiday in 1992. In 2000, South Carolina became the last state to sign a bill recognizing MLK Day as a paid holiday. 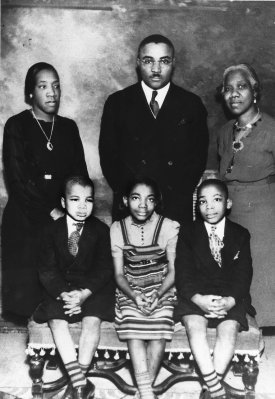 What Martin Luther King Sr. Wrote About His Son's Death
Next Up: Editor's Pick