The man who killed five people in a shooting Friday at Florida’s Fort Lauderdale–Hollywood International Airport demonstrated “erratic behavior” in November that concerned FBI agents, who referred him for mental health treatment.

Esteban Santiago, 26, pulled a semiautomatic handgun from his checked luggage Friday in the baggage claim area of Terminal 2 and began firing at travelers until he ran out of ammunition, threw his gun down and laid spread-eagle on the ground, the Associated Press reported.

At a press conference Saturday morning, FBI agent George Piro, who is in charge of the Miami field office leading the investigation, confirmed reports that Santiago had visited the FBI field office in Anchorage, Alaska in November.

“He walked in, as anyone has the right to do so,” Piro said. “It was during that contact that the agents, themselves, noted the erratic behavior that concerned them.” Piro said Santiago was taken into custody at that time and referred to a facility for mental health treatment.

Santiago arrived Friday in Fort Lauderdale aboard a Delta flight from Anchorage, where the only piece of luggage he checked was his gun, Anchorage airport police chief Jesse Davis told the AP.

“The indication is that he came here to carry out this horrific attack. We have not identified any triggers that would have caused this attack,” Piro said Saturday, adding that there has been no indication of a specific reason why Santiago—who authorities say acted alone—chose the Fort Lauderdale airport. Piro said investigators are continuing to explore terrorism as a potential motive.

In addition to the five who were killed, six people were injured in the shooting, Broward County Sheriff Scott Israel said at Saturday’s press conference, correcting an initial statement from authorities that had said eight were wounded. He said three are in good condition and three remain in intensive care.

The incident sparked panic among Fort Lauderdale travelers, many of whom fled onto the tarmac to evacuate. An additional 37 people were later taken to hospitals with minor injuries resulting from the panic, including chest pain, anxiety and fall injuries.

Family members said Santiago—who was living in Anchorage—was a new father with a history of mental health problems, the AP reported. He served in Iraq for a year with the National Guard after being deployed in 2010.

A military spokeswoman told the AP that Santiago was discharged from the Alaska Army National Guard last year for unsatisfactory performance. The Pentagon said Santiago went AWOL multiple times and was demoted and then discharged, the AP reported.

Bryan Santiago told the AP that his brother hadn’t spoken to him about medical issues, but Esteban Santiago’s girlfriend had recently told his family he was receiving psychological treatment.

“We have not talked for the past three weeks,” his brother told the AP. “That’s a bit unusual … I’m in shock. He was a serious person … He was a normal person.”

The incident is still being investigated by the FBI, and Santiago is expected to appear in federal court on Monday. 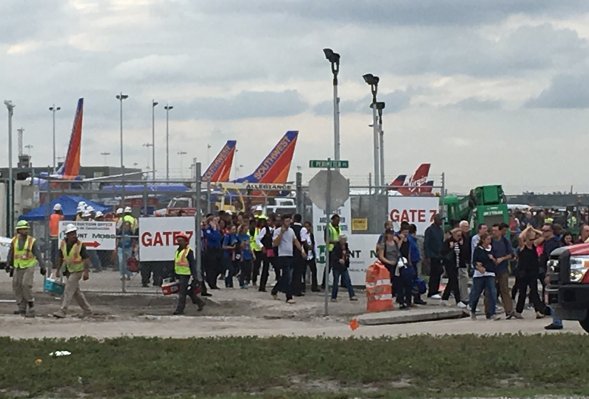