What would a caveman eat? That’s the basic premise behind the Paleo diet, a nutritional regimen centered on the same foods that sustained our hunter-gatherer ancestors. The trouble is, we don’t know exactly what those foods were.

But archeologists at a site in the northern Jordan Valley in Israel have uncovered new and surprising clues about the real Paleo diet: It turns out ancient humans feasted on a wide variety of plants along with their fish and meat.

The researchers from the Hebrew University of Jerusalem and Bar Ilan University identified 55 edible plant species that the camp’s inhabitants would have eaten 780,000 years ago, including veggies, fruits, nuts, and seeds. Some you’d even recognize, like water chestnuts and acorns.

“Our knowledge of the diet of early hominins derives mainly from animal skeletal remains found in archeological sites, leading to a bias toward a protein-based diet,” the authors wrote in the study, which was published in the Proceedings of the National Academy of Sciences. They concluded that their findings “change previous notions of Paleo diet.”

Health.com: Everything You Need to Know About the Paleo Diet

What’s more, our ancestors were by no means picky eaters. They had a varied diet, the authors point out, and ate in-season, which may have allowed them to hunker down in one place and find food all year long.

The researchers also found evidence that these early humans cooked their food to make it safe to eat, and more palatable: “The use of fire is very important because a lot of the plants are toxic or inedible. Using fire, like roasting nuts and roots for example, allows the use of various parts of the plant,” said author Naama Goren-Inbar, a professor at the Institute of Archeology at the Hebrew University of Jerusalem, in a press release.

So would a caveman eat mostly meat, or mostly plants?

The answer to that question is still unknown. “There probably was no single balance between meat and plant,” Peter Ungar, PhD, chair of anthropology at the University of Arkansas, said in an interview with the New Scientist. “Human evolution is a work in progress, and diets likely varied along a continuum in both time and space.” 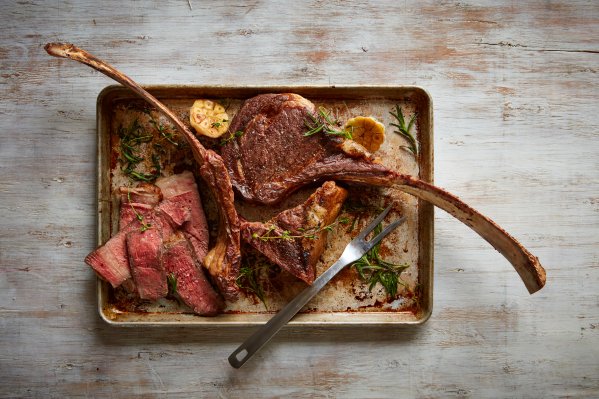 Should You Try This Trendy Low-Carb Diet?
Next Up: Editor's Pick