What 5 Political Promises Say About the State of the World

Like all presidential candidates, Donald Trump made a lot of campaign promises. Though enough voters appear to have liked what they heard to make Trump President, some of those pledges, like deporting millions of illegal immigrants and banning Muslims from entering the country, are unlikely ever to be fulfilled. Here then are 5 of the most significant recent promises being made by politicians around the world, and what they tell us about current conditions in the countries they lead.

1. Angela Merkel, Germany
The promise:
“The full veil is not appropriate for us, and should be banned wherever legally possible.”

What it says about Germany:
Merkel remains committed to the Western liberal order. Having grown up in East Germany, she has seen the alternative firsthand. But her vow to accept as many Syrian refugees (more than a million to date) as qualify under German asylum rules has,however well-intentioned, created an easily measured political backlash across the country. Facing elections next fall, she has seen her approval rating drop from more than 70 percent in the summer of 2015 to 55 percent today. She remains the odds-on favorite to remain chancellor, but the trend lines have her attention—and her concern.

The promise to ban full-face covering for Muslim women represents an attempt to take the edge off the anger of those who blame Merkel for allowing too many Muslims to enter the country, even if the “legally possible” clause gives her some wiggle room. Ever the scientist, Merkel understands the idea, often attributed to Charles Darwin, that it’s not the strongest or smartest who survive—it’s those most capable of adapting to their environment.

What it says about Iran:
President Rouhani, also facing re-election, is in an even tougher spot. In Iran, he’s the face of a nuclear deal with the West that has not delivered the sudden economic boost he promised—Iran expected its economy to expand by 8 percent, but the IMF says it’s grown by just 4.5 percent. Enter Donald Trump, who matches the inflammatory rhetoric of Iran’s hardliners with his own condemnation of the deal. Ahead of elections in May, those hardliners think Trump is the greatest thing that could have happened this year.

But Rouhani’s not wrong about the nuclear deal. Trump knows that other signatories—particularly Russia and China—won’t re-impose sanctions on Iran just because Washington wants them too. Rouhani has real leverage here, but his aggressive rhetoric on this subject reflects the anxiety of Iran’s reformers that hardline rivals are gaining political ground on them.

3. Narendra Modi, India
The promise:
“I promise to deliver a corruption-free India… people have chosen our government to get rid of black money.”

What it says about India:
In early November, Modi surprised his country by announcing that 500 and 1,000 rupee notes (equivalent to $7.50 and $15, respectively) would no longer be accepted as legal tender. This touched off nationwide protests. India is a cash-based economy, and those 500 and 1,000 rupee notes make up 86 percent of the total money in circulation. But Modi framed the move as a necessary evil to tackle tax evasion; according to 2013 figures, only 1 percent of Indians paid taxes. And he knows that corruption is a problem that plagues every level of India’s economy.

To date, India is one of globalization’s biggest winners (between 2004 to 2011, the number of Indians living on less than $1.90/day fell from 433 million to 268 million). But having a lot of cash doesn’t make a country “developed”; it needs institutions that have substantial influence in the real economy. In particular, it needs the ability to collect taxes. Since 2014, Modi has advanced a number of much-needed reforms that didn’t require congressional cooperation, but he needs his party to win in provincial elections next year ahead of his 2018 re-election campaign to give him the mandate he’ll need to move forward on tougher reforms.

4. Theresa May, United Kingdom
The promise:
“We want to bring net migration down to sustainable levels – that means in the tens of thousands … When we leave the European Union we will able to bring control to the movement of people from the E.U. into the United Kingdom.”

What it says about the UK:
Six months later and British leaders are still wondering what “Brexit means Brexit” really means. We know that immigration control—which 33 percent of ‘Leave’ voters cited as their main motivation for voting—has become the public focal point of the Theresa May administration. That makes sense for a country whose foreign-born population has doubled since 1993 as a direct result of E.U. rules on the movement of people.

But for all of May’s tough talk, it remains to be seen whether the U.K. will surrender all access to Europe’s single-market to gain closer-to-full control of its borders. Brussels has balked at this suggestion. The benefits of trade with the E.U. come with respect for E.U. values, like the free movement of people across borders. Given that there are more than 1 million U.K. citizens living in other E.U. countries and more than 3 million E.U. citizens living in the U.K., eventual compromise remains a good bet. But in the meantime, both sides will protect their domestic political strength by appearing to drive as hard a bargain as possible.

5. Xi Jinping, China & Hong Kong
The promise:
Beginning in 2017, Hong Kong gets to elect its Chief Executive by popular vote—but Beijing gets to vet which candidates are allowed to stand.

What it says about China:
China’s President Xi Jinping continues to consolidate power; the 1 million+ Communist Party members punished during his anti-corruption push can attest to that. But Xi knows that as China’s international influence expands, he must protect his country’s international image. Pro-democracy activism in Hong Kong can make Beijing’s life miserable, especially ahead of a crucial leadership transition in China itself next fall. Beijing wants to create the appearance of democracy in Hong Kong without losing control of its politics. It can crush dissent in Tibet or Xinjiang without much international media coverage. In Hong Kong, there are cameras everywhere, and the so-called Umbrella Movement knows how to play to them.

Five of seven members of the Politburo Standing Committee, the country’s highest political authority, are scheduled to be replaced, though Xi will stay on to serve for a second five-year term. Not a good moment for a public test of Xi’s strength. 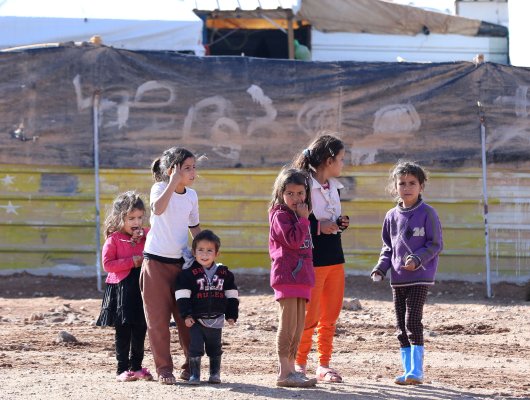 Invite Refugees Into Your Homes and Hearts This Holiday
Next Up: Editor's Pick