Dolly Parton‘s three-hour telethon to raise money for the victims of the Tennessee wildfires on Tuesday evening raised “millions,” according to the country music star, who did not disclose the exact amount.

The ‘Jolene’ singer, a Tennessee native born in Sevier County, established a relief fund earlier this month to held those who lost their homes in the Great Smoky Mountain wildfire that ravaged through part of Tennessee, destroying more than 2,400 houses and businesses and killing 14 people. The “My People Fund” will give families affected by the fire $1,000 per month for six months, to help them get back on their feet.

During a televised special aired live from Nashville on Tuesday, dozens of country music legends performed on stage and answered phones. The Academy of Country Music, Taylor Swift and Paul Simon each donated $100,000, and the Tennessee Titans gave $144,270, WDTN reports.

Parton’s telethon goal was to raise $13 million, and she said the final amount raised is in the “millions.” The exact amount will be revealed once the telethon re-airs on the West Coast. Officials estimate the fires have caused $500 million in damages.

Speaking in a video about the fund late last month, the ‘9 to 5’ crooner said she wanted “to provide a hand up to those families who have lost everything in the fires.”

“I know it has been a trying time for my people and this assistance will help get them back on their feet,” she said. 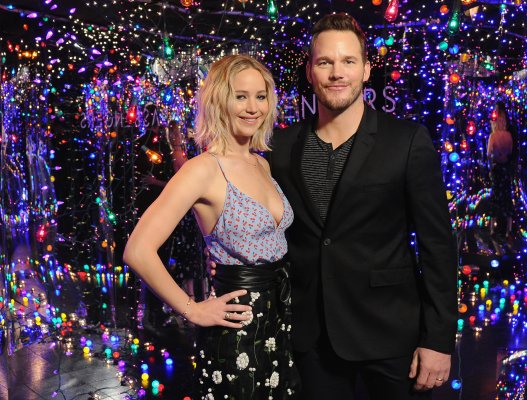 Jennifer Lawrence and Chris Pratt in a Battle of Insults
Next Up: Editor's Pick