The Truth About 6 Celebrity Nutrition Trends

People are captivated by celebrities—by their style, their anti-aging secrets and, of course, the ways they stay svelte and strong. But while we’re aware that our favorite A-listers aren’t health experts, it’s tough not to be intrigued when someone with access to the best of everything raves about a natural bloat fixer or skin miracle. The truth? Plenty of Hollywood’s advice is misguided (like guzzling bone broth for a flawless complexion), though some of the strategies are solid (such as sipping apple cider vinegar). I’ve checked out the research—where there is any—on the hottest food fads to help you tell the wise from the wacky and even dangerous.

Gwyneth Paltrow is reportedly a fan of golden milk (aka turmeric lattes), as are some of my pro athlete clients. This beverage is typically prepared by combining fresh or ground turmeric with coconut oil, honey, cinnamon, black pepper, and freshly grated ginger in warm almond or coconut milk. There is scant research on the concoction, but studies show that turmeric itself has anti-inflammatory properties, and its active ingredient, curcumin, is a powerful antioxidant.

Tom Brady and Gisele Bündchen’s Boston-based personal chef revealed that the star athlete avoids this plant group. Nightshades belong to a botanical family called Solanaceae, which includes potatoes, tomatoes, eggplant, and peppers, as well as tobacco. Nightshades contain chemical compounds called alkaloids; some people say they cause inflammation in the body, so consuming them too much could, in theory, exacerbate health issues such as joint pain, digestive issues, and certain chronic diseases.

The verdict: Most people should eat them. There is little scientific research to back up the idea that nightshades are inflammatory. Plus, the amount of alkaloids in the edible portions of most nightshades is very small, and cooking these foods may cut the alkaloid content by roughly half. My one caveat: If you’re injured or have an inflammatory condition (like arthritis) and want to see whether removing nightshades helps ease your symptoms, try eliminating them for 30 days. But do start eating them again if you don’t notice a difference, since nightshades are rich in vitamins and antioxidants.

One of Fergie’s middle-slimming tips: Take shots of unfiltered apple cider vinegar (ACV). Turns out, there’s some evidence that this cooking staple may help lower blood sugar and control weight gain. Consuming 2 tablespoons of ACV with a snack before bed helped type 2 diabetes patients reduce their blood sugar levels, according to research published in Diabetes Care. In an animal study, mice given a high-fat diet plus acetic acid (vinegar’s star component) developed up to 10 percent less body fat than those receiving the fatty diet with water.

The verdict: Give it a go. Just don’t down the vinegar straight: Undiluted shots can wear away tooth enamel over time and irritate the esophagus. Swirl 2 teaspoons of ACV and 1 teaspoon of honey into a cup of warm water and drink it once a day. Or drizzle ACV over chilled vegetable side dishes. But don’t forget to maintain a healthy eating routine; sipping ACV with doughnuts and fast food won’t produce a metabolism miracle.

Famous faces—including Victoria Beckham, Elle Macpherson, and Kelly Ripa—have praised an alkaline diet, in which you swap out foods that metabolize into acid-promoting compounds (such as meat, dairy and processed foods) for ones that form alkaline substances (fresh fruits, vegetables, nuts, seeds). The theory is that the diet can balance your body’s pH levels. In one study in Diabetologia, researchers tracked more than 66,000 women and found that those who ate the most heavily acid-producing diets had a 56 percent increased risk of type 2 diabetes, compared with those on the least acid-producing diets. Research in the American Journal of Clinical Nutrition showed that eating more foods that leave alkaline residues may help older adults hang on to more muscle mass as they age.

The verdict: Try it, but not for the reasons you think. The research on this eating style may still be emerging, but adopting the rules of an alkaline diet happens to be a natural route to healthier eating: Cut back on sugar, processed foods and excess animal protein, reduce your sodium intake and up your consumption of plant-based foods.

Ageless beauty Salma Hayek named bone broth—stock made by simmering the bones and connective tissue of animals or fish—her elixir for maintaining youthful, elastic skin. “It’s sort of disgusting,” she told People, while noting that the concoction has helped her avoid Botox thanks to its collagen content. Hayek isn’t the only one to sing its praises: Retired NBA star Kobe Bryant sipped the broth to aid recovery, and Paltrow has included it in her winter detox diet. Science, on the other hand, has not found that anyone should hop on the bone broth bandwagon.

The verdict: May not be worth your time or money. Bone broth is a perfect example of an overhyped nutrition trend that sounds fantastic in theory. But for now, the benefits are anecdotal or theoretical. As for the nutritional bonuses (bone broth is full of vitamins, minerals, and amino acids), you can get the same nutrients from eating solid foods, like pulses (beans, lentils and peas), eggs and chicken. Although one study has suggested that lead may leach out of bones into the stock, additional published research is lacking. Until we know more, if you’re someone who genuinely likes the taste of the stock, it’s OK to enjoy a mugful from time to time. Just know that it isn’t a proven tonic.

Actress Shailene Woodley reportedly brews chaga mushrooms in a slow cooker and sips the concoction as an immune booster. The medicinal fungi—which grows in cold climates on birch trees and has antioxidant properties—is thought to support gut health by reducing inflammation. The red flag: Human studies involving chaga are lacking. However, in rodents, chaga extract has been shown to suppress tumor growth and lower cholesterol.

The verdict: Steer clear. Avoid it unless you’ve gotten the OK from an MD. Chaga may stimulate the immune system, which could potentially exacerbate symptoms of autoimmune diseases, like lupus or multiple sclerosis. Chaga may also inhibit blood clotting, so be sure to skip it if you have a bleeding disorder or take any blood-thinning medications.

Want to try a food fad?

Before you get on board with the latest headline-grabbing eating trend, run down this quick safety checklist.

Any side effects? Watch out for health and lifestyle factors that make it a bad fit for you. Some bone broths, for example, may be a poor choice for someone with hypertension, due to the sodium content; a juice cleanse may be problematic for a hard-core gym-goer.

Will I stick with it? Trendy diets are often specific and restrictive, so people eventually go off them. But temporary diets have temporary results. If you can’t imagine yourself following the trend six months or a year from now, it’s probably not for you.

Is there research? Don’t rely on anecdotal claims or opinions from “gurus” or friends without medical or nutrition credentials. If you’re unable to find studies on a trend, consider it a red flag and consult a physician or dietitian before proceeding. 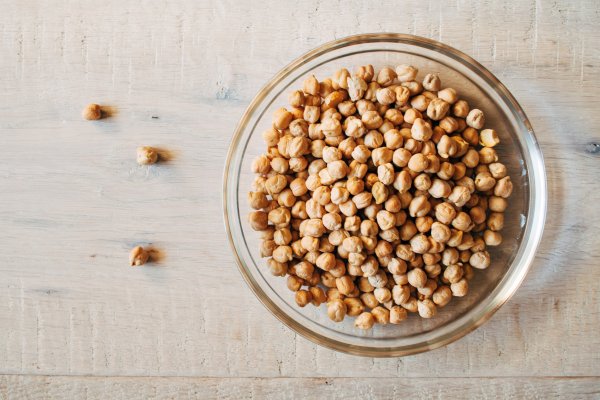 Eat This Protein at Breakfast And You'll Be Fuller Longer
Next Up: Editor's Pick