Inside Fidel Castro's Cuba — and His Legacy

To walk through Fidel Castro’s Cuba was to walk through a breathing allegory. The streets were called Virtues and Hope and Good Works and they ran around a Capitol that was a perfect replica of the one in Washington, but inches taller. Castro himself had been educated at the Colegio Dolores (“College of Hard Knocks,” as it might be translated), and had pushed out the Americans, with the result that most of his young people had one dream in life, to become an American. The buildings were crumbling, the colors were fading and the rooms were mostly filled with emptiness, but — human nature abhorring a vacuum — the emptiness was alive with spicy dances, raucous songs, dirty and seditious jokes, impossible rumors (Castro was being airlifted to Washington by his secret friends in the C.I.A. tomorrow and the new U.S. president was going to launch Bay of Pigs II).

It was no surprise that Revolutionary Cuba became the favorite stomping-ground of the godfather of magical realism, Gabriel García Márquez, who ran a film school there. Nothing stood to reason in the island of easy curves. During the 1980s, when I visited often, the shelves in the “Diplomatic” stores were full, in all their many aisles, of empty shelves. After the Soviets left a few years later, and the “special period” began, the shelves were full of still more emptiness. Fidel — his fellow Cubans always referred to him by his first name, as if they were grown-up children grounded for almost 50 years by an all too immortal father — filled the emptiness with more slogans, and the very tourists (and prostitutes) he had come to power to scourge.

Perhaps every revolution becomes an image of what it came to disrupt, as every rebellious son comes to resemble his father. Certainly, Cuba under Fidel became a kind of looking glass in which everyone saw a reflection of his wishes or his fears. Castro chose as his hero José Martí, the stirringly eloquent spokesman for independence who was Cuba’s leading freedom fighter; meanwhile, those who had fled Cuba for Miami and based their lives on hating Castro took as their hero José Martí, because he had spoken about freedom while exiled in the U.S. For most of his years in power, Castro’s staunchest ally was his seeming enemy, Washington, which, by imposing an economic blockade on the island, turned the local tyrant into a martyr, who could call himself a wounded David standing up to Goliath. Cuba became a party-loving, colorful Caribbean island that an intellectual was trying to turn into a solemn, party-loving Eastern European textbook.

These were some of the reasons, no doubt, why Cuba appealed to the patron saint of modern doubters, Graham Greene; the island became a cathedral of ambiguities. Castro filled the place with hospitals and schools, but the hospitals had no medicines and the schools had no books. He sent the Americans packing and put history under house arrest, with the result that his island became a perfect replica, frozen in time, of America once upon a time, when it was the brightest power in the world, and tail-finned Plymouths cruised past mafia-inflected hotels, while Ava Gardner smoldered in the corner.

In all my years of traveling, I have never seen a country so dominated by a single presence (not even Kim Il Sung’s North Korea). Fidel was in every conversation and, people were sure, he was looking in through every window. He was getting intelligence from their wives and learning about their escape plans from their boyfriends, as inescapable, among both communists and anticommunists, as God might be in a monastery (full of doubters and the faithful). Even as, with characteristic brilliance, he decreed that nothing be named after him, and the walls and billboards filled up with Che Guevara or Camilo Cienfuegos, Revolutionary Cuba became like a no-frills version of the Wynn Las Vegas resort, its maker’s name stitched into every sheet.

What was never easy to understand from afar was that the passionate, supple, wildly engaged people who made up Revolutionary Cuba disliked nothing more than Fidel — except for the alternatives. He is the devil himself, the dissidents who sought out foreigners told me on every day of my seven trips to the island, over more than a quarter of a century, and yet his brother Raúl (who succeeded him in 2006) is a mouse by comparison, with none of his brother’s vision, and the old Castro haters in Miami have spent half a century planning for redecoration of an island that no longer exists. “El Jefe” is ruthless and crafty and monomaniacal, they said, and yet he has made our tiny island, half as populous as Greater Mexico City, a major player on the globe. “He can’t afford to die,” one said, paraphrasing the health guru Jack LaLanne, of all people. “It would destroy his image.” 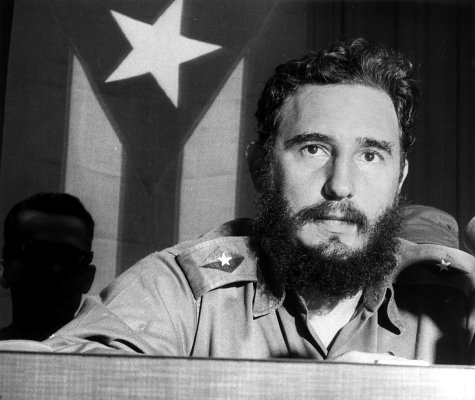 Fidel Castro Dies at 90
Next Up: Editor's Pick