Who Is the Woman at the Heart of Malaysia's Anti-Corruption Protests?

On Wednesday morning, hundreds of women in yellow T-shirts marched to the parliamentary building in Kuala Lumpur, demanding the release of activist Maria Chin Abdullah, who was arrested last Friday. They carried banners and placards that said: “Women 4 Maria” and “Free Maria.”

The march marks the fifth day since Chin, chairperson of Bersih 2.0, a pro-democracy and anticorruption coalition group, was arrested last Friday, on the eve of a massive Bersih protest in the Malaysian capital.

Along with Chin, Malaysian authorities also nabbed her Bersih colleague Mandeep Singh and at least nine other activists. All have been released, except Chin, the only one detained under the Security Offences (Special Measures) Act, or SOSMA, an antiterrorism law that allows detention for up to 28 days without trial. The 60-year-old activist — who suffers from hypertension, high blood pressure and osteoarthritis — is reportedly being held in solitary confinement in a cell without windows and with lights kept on around the clock.

“This amounts to torture,” says a statement from the Joint Action Group for Gender Equality, a coalition of women’s groups.

Bersih — which means clean in Malay — has vowed to hold a candlelight vigil every day until she is released. Hundreds of people have been flocking to the vigil each night, including former Prime Minister Mahathir Mohamad, a fierce critic of Prime Minister Najib Razak, and his wife Siti Hasmah. The hashtags #BebasMaria (Free Maria) and #MansuhSOSMA (Repeal Sosma) are trending on Malaysian social media.

Maria Chin Abdullah, chairperson of the coalition of Malaysian NGOs and activist groups known as Bersih, which translates as clean in the local Malay language, speaks with journalists in Kuala Lumpur on Sept. 14, 2016
Manan Vatyayana—AFP/Getty Images

Chin, who calls herself a feminist and a human-rights activist, has been part of Malaysian women’s movement for three decades. She helped set up AWAM in 1985 after she returned from her studies in London. In 2005, she co-founded and became the executive director of Empower, a nongovernmental organization that encourages women and young people to participate in politics and to campaign for civil liberties, a position she held until late last year. This sort of work has earned much respect from Malaysia’s civil society, especially from women activists.

“She is amazing,” Lee says about Chin. “Through Empower, she got to know women political leaders and have good relations with women leaders in the opposition.”

Chin was born in 1956 in the U.K., where her father was studying at that time, and later grew up in Malaysia. She converted to Islam when she married fellow activist Yunus Ali in 1993 — they had met in the 1970s when he was exiled in London. “We had a lot in common, especially over what was happening in the country. And he was interested in women’s rights, which was quite rare then,” Chin said about her late husband in an interview with Singapore’s Straits Times last year.

In 1987, Yunus was arrested under the Internal Security Act — the draconian law that was later replaced with SOSMA — along with some 100 other dissidents. It became a catalyst for Chin to focus on activism, and she was grateful that her husband “gave me that space for my involvement.” (Yunus died of kidney failure in 2010.)

She took the helm of Bersih 2.0 in 2013, when she was elected to succeed human-rights lawyer Ambiga Sreenevasan — now her legal adviser. Observers have pointed out that, unlike its first incarnation, whose leaders were primarily male and Muslim, the relaunched Bersih movement, which held its first rally in 2011, has been led by women unrelated to influential male politicians — an unusual feat in Malaysia.

Last week’s arrest wasn’t Chin’s first in her capacity as Bersih leader. On Sept. 8, 2015, she and eight other activists were arrested and charged for taking part in an allegedly unlawful assembly in March. In the weeks leading to the Saturday rally, she, her sons and colleagues, including Ambiga, received death threats. Chin was unfazed, however.

“We want to make sure that the process towards that election is fair and what the people want,” Chin told TIME on Nov. 16, two days before her arrest. “It’s a struggle that we have to go through.”

“We will continue to list these demands,” she added. “At the end of the day, it’s the people’s power that will create change.”

The scheduled protest on Saturday went ahead despite her arrest the previous night. Tens of thousands of yellow-clad protesters took to the streets in Kuala Lumpur, chanting “Bersih” and demanded the resignation of Prime Minister Najib, whom they accuse of massive corruption.

On Tuesday, her lawyer Ambiga, accompanied by Chin’s three sons, filed a habeas corpus application seeking her release. “My mother is a very strong person,” her second son Aziman Yunus said Monday, as quoted by the local media. “If you’re trying to break her will, no, you won’t.”

— With reporting by Nash Jenkins 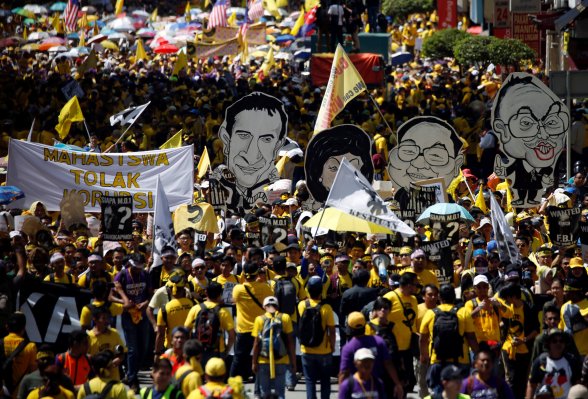 Thousands of Malaysians March Against Government
Next Up: Editor's Pick