Avocado toast. Matcha lattes. Poké bowls. If it sounds like we’re describing your Instagram feed, we are. A number of nutritious foods had a moment this year, and we couldn’t help but round up the most popular fare that healthy eaters were flat-out obsessed with in 2016.

We also wanted to know why certain eats gained such loyal followings among the fit this year, so we asked registered dietitians whether the trending foods are as wholesome as svelte celebs made us think they are.

Now, as you head into the new year, you’ll understand the health benefits (or lack thereof) of the things you’re loading onto your plate and pouring into your cup. So the next time you order your favorite protein pancakes and a turmeric latte at brunch, know you’re probably getting a good-for-you boost of vegan-friendly protein along with a healthy dose of anti-inflammatory compounds. And yes, we give you full permission to make it a double stack and opt for a refill.

Read on for the 14 foods that were beyond buzzy this year, plus experts’ advice on which ones deserve to be in your fridge—or forgotten—in 2017.

Healthy foodies loved matcha this year. Whether they drank it in shot, latte, or smoothie form, the wellness-minded were all about the powder because it packs a ton of antioxidants that protect against heart disease, cancer, and aging. Plus, the powder boosts energy in a big way; a cup of matcha can contain up to three times as much caffeine as a cup of steeped tea. But beware of matcha’s potential snags; some people aren’t fans of its super-earthy flavor, which is why certain powders have unwanted additives like sugar, and potential lead contamination is a concern. Read up on 7 Things You Should Know About Matcha for more about this trendy tea.

Celebs are all about bone broth, the stock that’s made from simmering animal bones with veggies and seasonings until they break down into liquid. Salma Hayek called it a potent anti-aging agent; Gwyneth Paltrow included it in her winter detox diet. Even Health’s food director, Beth Lipton, points to bone broth’s beauty, digestion, and joint health benefits. But is the savory soup all it’s cracked up to be? “Bone broth can be a source of key minerals and in some cases protein, depending on the type and how it’s made,” explains Cynthia Sass, MPH, RD, Health’s contributing nutrition editor. “But it can also be high in sodium, and one study found that organic chicken bone broth contained lead.” The bottom line: Like the stock itself, bone broth’s health benefits are murky. Your best bet is to make it yourself (here’s a bone broth recipe) so you can control exactly what goes in it.

Java junkies warmed up to cold brew this year, the chilled alternative to traditional hot coffee. Cold brew is made by steeping coffee grounds in cold or room-temperature water for an extended period of time (usually for hours, but it can sit for up to days), unlike regular brewed coffee that’s heated. (Here’s an easy cold brew coffee recipe.) Certain oils and fatty acids that are typically extracted by heat are left behind in cold brew, making it taste smoother and less bitter, says Sass. “It’s unknown whether cold brew packs a greater antioxidant punch compared to traditional hot brewed coffee. But coffee in general is a great source of antioxidants and has been tied to a number of health benefits, including protection against type 2 diabetes and Parkinson’s, as well as fending off aging and giving your workouts a boost.” So go ahead and drink up.

Sure, avocados are trendy, but when the buttery fruit is spread on toast, all bets are off. (Just search #avocadotoast on any social media platform). Luckily there’s nutritional value to the A-list snack. According to New York City-based dietitian Leah Kaufman, RD, avocado toast is the perfect way to sneak in healthy monounsaturated fats, which boast major health benefits, like lower cholesterol levels in the blood and a reduced risk of heart disease and stroke. Kaufman suggests topping your toast with eggs for protein, tomatoes for a hit of vitamins, or strawberries for a sweeter twist. (Or you could try one of these avocado toast recipes.) Just make sure you’re opting for whole grain or whole wheat bread. As long as you do that, “This is one food trend that should stick around for a little while,” says Kaufman.

Gaga for golden milk? You’re not alone. The warm beverage made from coconut milk and turmeric gained speed this year, along with a slew of other sips made with the intensely yellow seasoning. (Watch out, it stains!) But why is the ancient spice a favorite among the fit? “Turmeric contains a compound called curcumin, which has anti-inflammatory and antioxidant effects,” explains Megan Roosevelt, RDN, founder of HealthyGroceryGirl.com. “This is beneficial because inflammation is a precursor for many age- and diet-related diseases.” There are plenty of ways to add turmeric to your diet, but Roosevelt adds that it’s best to consume turmeric in combination with black pepper, which helps the body absorb curcumin. Turmeric chai latte, anyone?

Originally from Hawaii, poké (pronounced poh-KAY) is traditionally prepared with raw fish (like tuna, salmon, or yellow tail) that’s been cut up into small cubes and seasoned with ingredients like soy sauce, scallions, and sesame oil. (Here’s one healthy poké bowl recipe.) “Poké is a great way to get in protein without needing many sauces, which may be the culprit of extra calories,” explains Kaufman. The fish can be served over rice or by itself as a salad, and don’t hesitate to get creative with toppings. Kaufman suggests adding iron-packed seaweed, avocado, and zucchini noodles to the mix for a high-protein bowl.

Yes, people started using the slimy liquid that’s found inside a can of pulses (like chickpeas, beans, and peas) for cooking and baking purposes this year, and it actually worked. “When the liquid is whipped, the foam can be used as a plant-based substitute for cream or egg whites in dishes like vegan mousse, mock ice cream, and meringue,” explains Sass. Plus, aquafaba cuts back on food waste and is super low in calories. One tablespoon is just 3 to 5 calories.

Bugs are as nutritious as steak, according to one 2016 study, but if you bugged out when you heard healthy foodies were feasting on insects this year, we don’t blame you. Ick factor aside, some little critters are actually full of important nutrients. “Grasshoppers and crickets are pretty protein-packed, with up to as much protein per 3- to 5-ounce serving as the same sized portion of chicken breast,” says Sass.

Everything from sunflower and chia seeds to chickpeas and split peas fall under the umbrella of “sprouted seeds.” Foods sprout when conditions are just right, and become flooded with enzymes that make their nutrients more bio-available to our bodies. While there isn’t a slew of research on the health benefits of sprouted foods so far, studies have shown that sprouted grains, like brown rice and amaranth, have higher levels of antioxidants and fiber. Just make sure you buy sprouted foods that are made from whole, non-processed ingredients, since sneaky cereals and pretzels tout their sprouted status sans approval, says Sass.

When an ingredient is paleo, vegan, and naturally sugar-free, it’s bound to be beloved by health enthusiasts. That’s probably why lite coconut milk, which contains 60% less calories and fat than regular coconut milk, was so big in 2016. Plus, the dairy-free ingredient can be used in a range of recipes, whether added to coffee as an alternative to creamer or mixed into stir-fries for extra flavor. But while there’s growing research about the effects of coconut oil and milk on blood lipids and insulin resistance, they’re not the panaceas many brands make them out to be, says Wendy Bazilian, DrPH. Incorporate lite coconut milk into your diet in moderation, and always look for products with the simplest ingredients, like coconut, water, and guar gum (made with only the natural ingredients from the guar plant).

Pumpkin’s not the only orange food healthy eaters are obsessed with. In 2016, Pinterest was flooded with sweet potato recipes for toast, pudding, pancakes, lightened-up chips, soup, and much more. And it shouldn’t come as a surprise that these sweeter spuds are everyone’s new favorite fall food: in addition to being delicious, one sweet potato contains 438% of your daily value of vitamin A (compared to 1% from a white potato) and a big dose of vitamin C.

Fluffy pancakes are just what weekends called for this year, but an a.m. meal loaded with refined carbs wasn’t favored by fitness enthusiasts trying to squeeze in a morning sweat session. Luckily healthy foodies thought of a whole slew of smart ways to swap out white flour and boost the protein content of pancakes to fuel their workouts. Not sure how to cut down on the carbs in your go-to recipe (or, let’s be honest, mix)? Try making these three simple protein pancake recipes that use good-for-you ingredients like quinoa, spelt, hemp hearts, and more.

On-the-go snacks got even tastier this year, with food bloggers and chefs creating their own versions of the all-important protein bite. The golf ball-sized pieces of goodness are typically made from a combo of dried fruit (which gives them natural sweetness) and nuts that are loaded with healthy omega-3 fats. Add dark chocolate chips for an extra decadent pick-me-up or oats—like we did in these no-bake energy bites—to stay super satiated between meals. 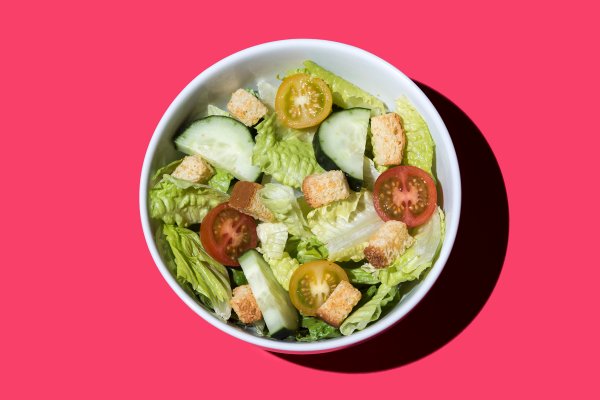 How to Build a Healthy Meal That Actually Keeps You Full
Next Up: Editor's Pick