How Will Donald Trump Govern?

If you only read one thing: The question everyone in Washington—in America—is asking today is: “How will he govern?” Many of the people around the President-elect are asking themselves the same thing. Donald Trump will take office as one of the most-well known president-elect’s in the nation’s history, but what is less known is what he will do there. The 2016 campaign was certainly light on the issues, with Trump offering a number of contradictory policies and little indication of what he will prioritize. But today might provide some answers. Trump is set to meet with President Obama today, while Vice President Joe Biden hosts VP-elect Mike Pence. Trump and Pence will also meet with Speaker of the House Paul Ryan and Senate Majority Leader Mitch McConnell. Those meetings, and the issues discussed, may provide a window into what Washington will look like under unified Republican leadership.

Trump’s team is triumphant, as they take credit for their victory and the “movement” Trump has come to lead. And Democrats are struggling to come to grips with a shocking upset, and to plot out what comes next for their wounded party.

What’s Next for Democrats After the Clintons?
TIME’s Sam Frizell tries to answer the question all Democrats are asking

“I am looking forward to doing everything that I can to make sure that the next President is successful in that.” — President Barack Obama Wednesday

“He just earned a mandate.” — Speaker of the House Paul Ryan Wednesday

Joe Klein: What Comes Next With President Trump [TIME] 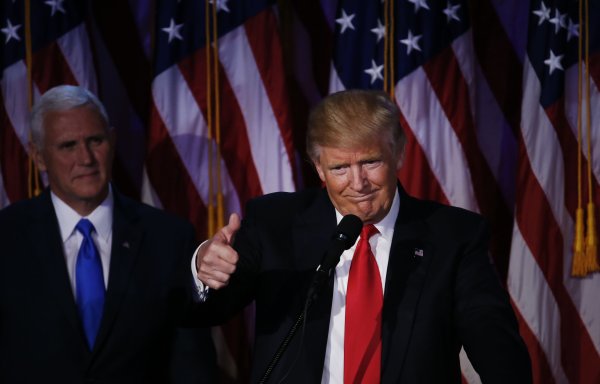 Read the Conservative Wishlist for President-Elect Trump
Next Up: Editor's Pick