If you only read one thing: Donald Trump will be our next president, taking the oath of office in fewer than 71 days, as Republicans are set to have unified control of the federal government for the first time in nearly 80 years. The political shocker defied predictions and polling, as the President-Elect marshaled an enthusiastic voter base to the polls and outmaneuvered a better-funded and better-organized Hillary Clinton machine. Now it is on to the hard work of uniting the country and governing. Both Clinton and President Obama pledged a peaceful transition of power and wished the soon-to-be 45th President well.

Trump spent the day Wednesday collecting congratulatory calls and messages, while beginning the work of preparing for his transition. He huddled with transition chairman New Jersey Gov. Chris Christie and other top aides to start shaping his administration. An early favorite for a top post is RNC Chairman Reince Priebus, who likely to be chief of staff, according to two people familiar with the thinking. Trump called him a “super star” early Wednesday morning, and he brings both the ability to manage the candidate and bring wayward Republicans along.

It was a disappointing night for Democrats up and down the ballot, as they lost a prime opportunity to take the Senate and appear set to gain fewer than a dozen seats in the House. But Liberals saw some successes on petitions, as marijuana legalization and minimum wage hikes passed in several states.

How Trump shocked the world. What it means for your wallet. And how he must shift to become the Commander-in-Chief.

How Trump Must Now Shift from Candidate to Commander-in-Chief
The U.S. military always salutes, but he needs to reach out, too, TIME’s Mark Thompson writes

Hillary Clinton Collides Again With Highest Glass Ceiling
Her loss may be as good a sign as any that we’re not ready for glass-breaking yet, TIME’s Charlotte Alter writes

“Hillary has worked very hard for a long period of time and we owe her a major debt of gratitude for her service to our country.” — Donald Trump praising Hillary Clinton in his victory speech

“Donald Trump is going to be our president. We owe him an open mind and the chance to lead.” — Clinton conceding the election Wednesday morning

How the 2016 Election Became a Watershed for Weed [TIME]

All the Emotions of Election Night in One Photo [TIME]

The Other Reason George W. Bush Couldn’t Bring Himself to Vote for Donald Trump [TIME] 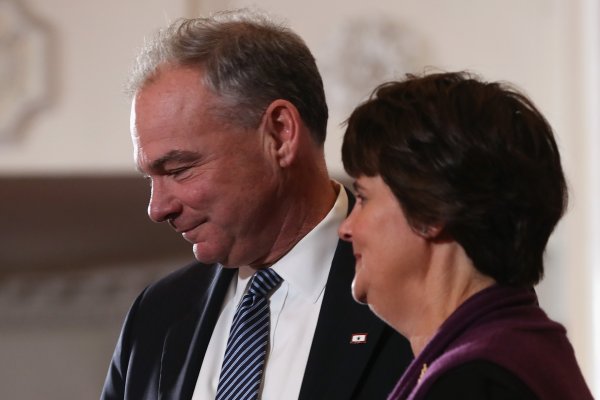 Tim Kaine Quotes William Faulkner in Concession Speech: 'They Kilt Us but They Ain't Whupped Us'
Next Up: Editor's Pick