Think Politics Are Bad in the U.S.? Welcome to Venezuela

His economy is in freefall, his citizens are taking to the streets to demand his ouster and his country can’t even pull off an international soccer match without things going haywire. So Venezuelan President Nicolás Maduro responded last week by hosting a new radio program, called “The Hour of Salsa,” in which he insulted the political opposition—then spun tunes and danced around the studio with his wife. Maduro followed up this bizarre performance with a speech in which he declared that “neither through elections nor bullets” would the opposition ever gain control of the Miraflores presidential palace.

To opposition leaders who recently agreed to Vatican-mediated talks with the government, Maduro’s behavior is a clear sign that he has little intention of seriously negotiating or making concessions to help pull Venezuela out of its political and economic tailspin. Not that the often fractured opposition itself is in much better shape—the decision temporarily suspend massive street protests and negotiate has divided the opposition coalition, which is made up of about two dozen parties. Some leaders claim Maduro is stalling for time and insist that the only way to confront his increasingly authoritarian government is by putting throngs of angry people in the streets, day after day.

“Every time the government feels pressure, at home or from abroad, it calls for talks. And every time they have violated all the agreements they reached,” said Maria Corina Machado, a former congresswoman who heads a right-wing opposition party that’s not taking part in the negotiations.

The streets have been home to scores of raucous demonstrations against Maduro, who since his 2013 election following the death of revolutionary leader Hugo Chávez has led this oil-rich country into its worst economic crisis in decades. There are shortages of basic foods, like flour, pasta, and cooking oil. Outside Caracas bakeries bread lines form as people wait to buy price-controlled baguettes. Venezuela is edging closer to hyper-inflation. Its currency, the bolívar, has collapsed, with the largest-denomination bill now worth about 6 cents. Crime is on the rise.

Polls show that most Venezuelans want Maduro to go, and soon. But electoral authorities loyal to the president on Oct. 20 suspended a recall election that was designed to cut short his term, which is scheduled to end in 2019. That brought tensions to a boiling point, with the opposition threatening to carry out a symbolic political trial of Maduro in Congress and to march on the presidential palace. Maduro called on his supporters to surround the building and defend the revolution.

Finally, the Vatican convinced both sides to give negotiations a shot. Also urging them to talk was Thomas Shannon, the U.S. Under Secretary of State for Political Affairs who spent three days in Caracas last week meeting with Maduro and opposition politicians. He called the dialogue “a good-faith effort to find a peaceful way out of the political impasse.”

Shannon warned that in the absence of negotiations, unpredictable street protests can turn violent. That’s what happened here in 2014 when clashes between demonstrators and security forces killed more than 40 people. But Shannon also acknowledged that it is Maduro who “holds the key” to the success or failure of the dialogue. the Venezuelan president maintains a firm grip over the armed forces, the judicial system and other institutions that would be major players in a political transition. In addition, the government is holding about 100 political prisoners whom the opposition wants released immediately.

For the dialogue continue, the government must agree to major concessions in the coming days, said Henrique Capriles, a former opposition presidential candidate. He and other negotiators have set a Nov. 11 deadline for the government to put forward a plan to release all political prisoners and to either reinstate the recall referendum or move forward with fresh presidential elections. They also want to reorganize the Supreme Court and other government bodies that are supposed to be independent but now answer to the president. “Venezuelans can’t be waiting months for these changes,” says Capriles.

Phil Gunson, a Caracas-based analyst for the International Crisis Group, says that if Maduro takes the talks seriously, they could help stave off a popular uprising and open the door to a peaceful transition of power. For example, an agreement to reschedule the presidential elections next year might give Maduro and his inner circle—which includes some officials who could face corruption, drug trafficking or human rights accusations under a new government—time to negotiate legal benefits or even exile.

But in an interview on state TV Sunday, Diosdado Cabello, a former vice president and a hard-liner within the ruling Socialist Party, said early elections were not on the bargaining table. “Now they talk about general elections,” he said, speaking of opposition negotiators. “I do not know where they get that from, what illusion they’re under. That is not true. It has not been raised.”

If the government refuses to budge, opposition leaders say they will paralyze Venezuela with more protests.

“Throughout world history you see that people power can work when you have the right leadership and national unity,” says Machado, the former lawmaker. “We are facing off against a dictatorship so we need to have people in the streets.” 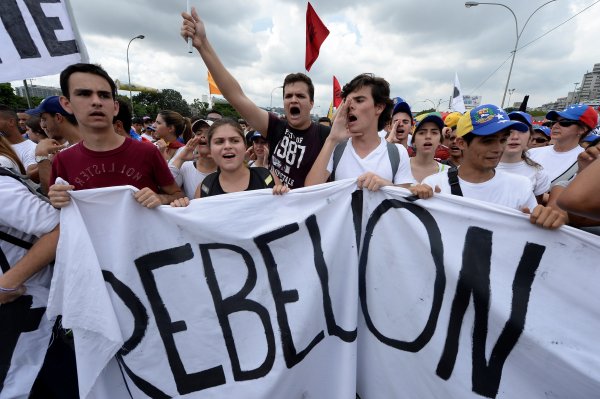 What to Know About the Situation in Venezuela
Next Up: Editor's Pick