Have you ever noticed that the less you sleep, the more hungry you feel the next day? Research suggests that this is indeed true. But you might not realize how many extra calories you’re taking in (spoiler: it’s more than you’d think).

In a new study published in the European Journal of Clinical Nutrition, researchers set out to put a number on those surplus calories consumed by the tired and weary. In recent years, adequate sleep has emerged as a third pillar, along with exercise and healthy eating, as a way to help control weight. Previous studies have linked a lack of sleep with obesity and even type 2 diabetes; but this is one of the first times researchers have calculated the caloric effect of insufficient Z’s.

Health.com: 30 Sleep Hacks for Your Most Restful Night Ever

The researchers found that the sleep deprived consumed an average of 385 calories extra per day, about the equivalent of four and a half slices of bread, says Pot, who is a visiting lecturer in the Diabetes & Nutritional Sciences Division at King’s College London, and also an associate professor at Vrije University Amsterdam. (To put 385 calories into context, it’s close to a fifth of the energy needs of a moderately active 30-year-old woman.)

Other researchers have speculated that a lack of sleep might affect hormones related to hunger, such as leptin and ghrelin. But Pot and her co-authors believe the explanation may be “hedonic,” meaning the tired overeat because they’re seeking pleasure.

Sharon Zarabi, RD, director of the bariatric program at Lenox Hill Hospital in New York City, shares the same suspicion. The urge to binge may be “because they are more jittery and can’t satisfy their anxiety with eating,” Zarabi (who was not involved with the study) wrote in an email to Health.

Health.com: How to Stop Overeating Once and For All

Sadly, the researchers also found that staying up later doesn’t actually burn extra calories, suggesting that not getting enough sleep over the long term could be a recipe for weight gain. But none of the studies included in this review lasted more than two weeks, making it impossible to know if those extra calories add extra pounds as well.

The authors are now doing a study with people who regularly don’t get enough sleep to see if that is the case. “We need to do more research into sleep as a possible remediable risk factor for obesity and possibly other cardio-metabolic diseases like diabetes, especially in today’s society in which trends are showing that people sleep less,” Pot said. 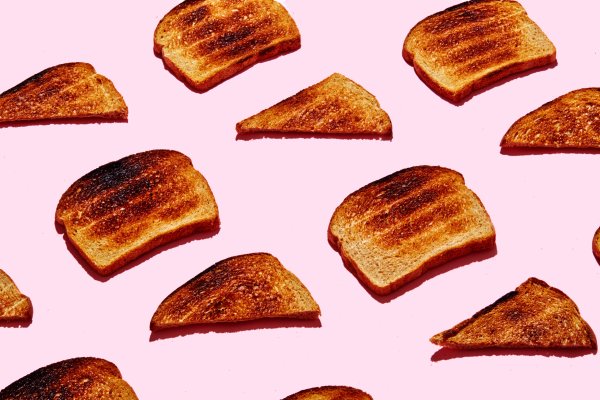 You Asked: Should I Go Gluten Free?
Next Up: Editor's Pick