The father of a Muslim-American Army captain who died in Iraq is speaking out against Donald Trump in a new Hillary Clinton campaign ad.

In the 60-second spot, Khizr Khan tells the story of his son Humayun, who was killed in 2004, before tearfully asking the Republican nominee, “Would my son have a place in your America?”

Khan made headlines when he gave an impassioned speech about his son at the Democratic National Convention in July, condemning Trump for his rhetoric on Muslim immigration. Trump responded by attacking Khan, and the two traded sharp criticisms in the media.

In August, Khan said that he felt sad for Republicans who support Trump. “It is so sad that this candidate [Donald Trump] is putting through our leaders—that they have to give these kind of statements, they have to clarify their positions, explain his thoughtlessness, his compass-less, his total lack of empathy,” Khan told TIME. 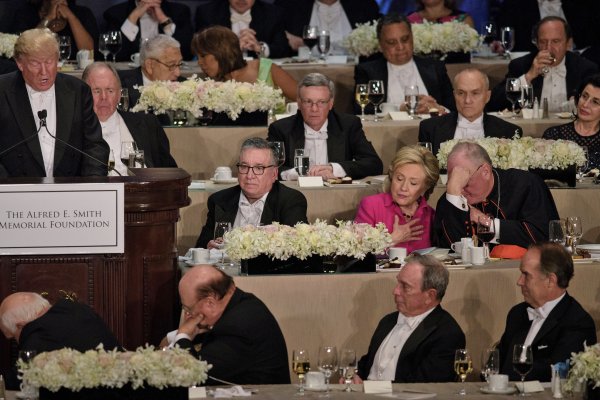 Al Smith V Says Donald Trump 'Took It a Little Too Far' at Catholic Charity Roast
Next Up: Editor's Pick