A voter casts a ballot in a booth at an absentee voting station in Fairfax, Virginia, Oct. 12, 2016. The general election takes place Nov. 8, 2016.
Andrew Caballero-Reynolds/AFP/Getty Images
By Kevin Lui

Cybersecurity surrounding the U.S. electoral system has been a focus this election cycle, not least since Russian hackers have actually found their way into the Democratic Party’s network and state voter rolls, and WikiLeaks has apparently obtained and published emails allegedly belonging to Hillary Clinton campaign chair John Podesta.

Republican nominee Donald Trump has repeatedly claimed — without any evidence whatsoever — that the election might be “rigged” against him. As he cast uncertainty over whether he would accept the Nov. 8 vote’s result in Wednesday’s final televised presidential debate, U.S. intelligence and law-enforcement sources are warning that Russian hackers could undermine the American public’s trust in the electoral process by posting fake evidence of voter fraud online.

Reuters reports Thursday that these officials, speaking on conditions of anonymity, said that hackers affiliated to Russian intelligence agencies could produce fake documents purporting to show signs of electoral rigging and disseminate them online, in the hopes of creating public perception of widespread foul play in the general election.

They said that, while there was no evidence of such a scheme in the works, state and local authorities were warned to be ready and take precautions against hacking attempts.

These officials also stressed that the large and dispersed electoral operation — conducted locally by states and local authorities instead of a centralized U.S. federal government operation — means that hackers would be unable to actually alter the election’s outcome. 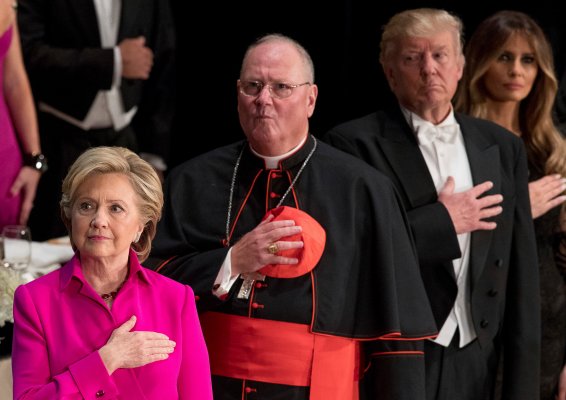 Donald Trump and Hillary Clinton Are Sitting One Seat Apart at the Alfred E. Smith Dinner
Next Up: Editor's Pick