Another Woman Says Donald Trump Groped Her: 'I Felt Intimidated and Powerless'

Yet another woman has come forward to accuse Donald Trump of sexual assault, just hours after the Republican presidential nominee argued at the third debate that the many harassment allegations against him are untrue.

Karena Virginia, a yoga instructor an empowerment coach, said at a news conference Thursday that Trump harassed and groped her during a chance encounter at the U.S Open in 1998. As she was waiting for a car to take her home, Virginia said she overheard Trump appraising her body. “I was surprised when I overheard him talking to the other men about me,” Virginia told reporters in New York. “He said ‘hey, look at this one, we haven’t seen her before, look at those legs,’ as though I was an object rather than a person.”

Virginia said Trump, a total stranger, then grabbed her arm and touched her breast.

“I was in shock,” Virginia said. “I flinched. He said, ‘Don’t you know who I am?’ I felt intimidated and powerless. I said ‘yes.'”

When she got into the car, Virginia said, “my shock turned to shame.” She said it made her “disinclined to wear short dresses or high heels.”

Virginia said she ran into Trump again about five years ago, and he “looked me up and down in a lecherous manner.” After this encounter, Virginia said she finally realized that, “I was the victim and he had violated me when he groped me years earlier.”

She then directed a portion of her remarks directly to Trump: “Mr. Trump, perhaps you do not remember me or what you did to me so many years ago. But I can assure you that I remember you and what you did to me as though it was yesterday. Your random moment of sexual pleasure came at my expense and affected me greatly.”

Virginia said she had told her husband and several friends about the encounter before she came forward. She is being represented by Gloria Allred, who also represented Summer Zervos, the former Apprentice contestant who came forward last week alleging that Trump kissed her and attempted to seduce her during a business meeting.

During Wednesday night’s debate, Trump dismissed the growing accusations against him as “totally false.” He said, incorrectly, that many of the allegations had been “debunked,” and he blamed Hillary Clinton’s campaign for manufacturing them.

“I didn’t even apologize to my wife, who’s sitting right here, because I didn’t do anything,” he said. “I think they want either fame or [Clinton’s] campaign did it and I think it’s her campaign.”

In a statement released shortly after the press conference, the Trump campaign dismissed the allegations as politically motivated. “Discredited political operative Gloria Allred, in another coordinated, publicity seeking attack with the Clinton campaign, will stop at nothing to smear Mr. Trump. Give me a break,” said Deputy Communications Director Jessica Ditto in a statement. “Voters are tired of these circus-like antics and reject these fictional stories and the clear efforts to benefit Hillary Clinton.”

Allred said she is a proud Hillary Clinton supporter and served as an elected delegate at the DNC, but said she has not given the Clinton campaign any advance warning about either accuser she has represented. She said the Clinton campaign is not involved in the release of any of these allegations, and there is no coordination. 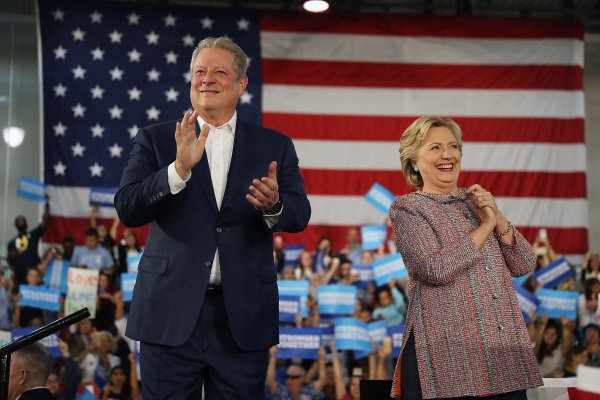 Donald Trump Is Not Following Al Gore's Lead By Doubting Election Results
Next Up: Editor's Pick