Stephen Colbert may have had the night off from The Late Show, but he couldn’t wait to weigh in on the second presidential debate, as well as debate phenomenon, audience member Kenneth Bone.

Colbert brought the cameras into his home and introduced his new internet friendly co-host, an adorable undecided kitty. Colbert said that the debate was overshadowed by Republican presidential nominee Donald Trump’s leaked video, which lead to a difficult weekend for parents who “had to sit down and explain to their kids who Billy Bush was.”

Colbert had strong opinions on both Trump’s and Clinton’s performances, but like many people who watched the debate at home, Colbert knew the real star of the debate when he saw him – Bone. “America just got an express ticket to Bone town,” Colbert declared before launching into a song all about Bone, who “took command of the microphone” and “faced the candidates with nerves of stone.” 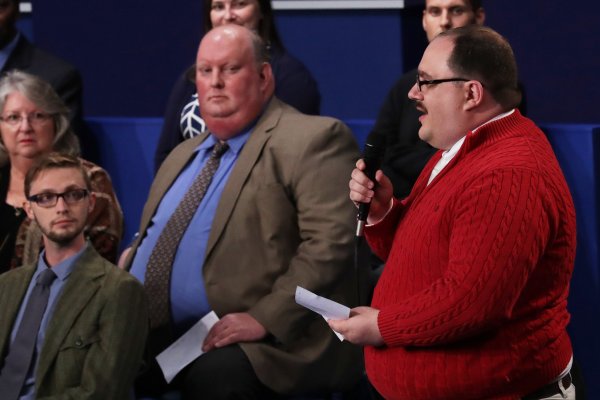 Ken Bone’s Jimmy Kimmel Interview Shows Why the Internet Loves Him
Next Up: Editor's Pick