On Tuesday, the Center for Science in the Public Interest (CSPI) filed a lawsuit against PepsiCo, parent company of Naked Juice. A statement from the nonprofit group argues that the fruit-and veggie-based juices are advertised as “predominantly containing high-value ingredients such as acai berry, blueberries, kale, and mango, when in fact the predominant ingredient in the product line is usually cheap, nutrient-poor apple juice.”

CSPI also takes issue with the juices’ claims of “no sugar added,” which it says implies that they are low in sugar. In fact, the group points out, a 15-ounce bottle of Kale Blazer (the first ingredient is orange juice) contains eight teaspoons of sugar. A 12-ounce can of Pepsi, in comparison, has 10 teaspoons.

Finally, the lawsuit implies that PepsiCo tricked consumers into buying Naked Juices by giving them misleading names and filling their labels with pictures of highly nutritious ingredients (like kale) but not of more prominent ingredients, such as apples and oranges and juices.

“Kale is the king of the garden,” according to the text on the side of the bottle. “And, when it’s blended with cucumber, spinach, celery and a pinch of ginger, you get a royal roundtable of yum.” Advertisements for the product on social media and elsewhere state that “…you might actually live forever because kale has tons of antioxidants that combat aging,” and that the drink is a way to “pack more kale into your diet.”

“Consumers are paying higher prices for the healthful and expensive ingredients advertised on Naked labels,” said CSPI litigation director Maia Kats. “They’re not getting what they paid for.” Other flavors mentioned in the legal filings include Green Machine and Very Berry.

The plaintiffs of the class-action lawsuit say they would not have purchased these beverages if they’d been aware of their true nutritional profile, the lawsuit claims. It is seeking refunds for consumers, as well as an injunction to stop PepsiCo’s marketing.

PepsiCo released a statement on Wednesday in response to the lawsuit, saying: “There is nothing misleading about our Naked Juice products. Every bottle of Naked Juice clearly identifies the fruit and vegetables that are within. For example, the label on our Kale Blazer juice accurately indicates each bottle contains 5 3/4 Kale leaves.” You can read it in its entirety here.

In 2013, Naked Juice settled another class-action lawsuit for its use of the term “all natural” on its labels, although it denied the term was misleading. CSPI has also sued other brands, including CocaCola’s Vitaminwater, over health claims made on their labels.

Does this mean Naked Juice is unhealthy? Not necessarily, says nutritionist and exercise physiologist Felicia Stoler, RD, who is not affiliated with PepsiCo or any other juice companies.

Consumers should read nutrition labels and be aware of a drink’s full list of ingredients, she says. But despite their high sugar content, people could do a lot worse than a drink made of vegetables and fruit juice. “It may be high in calories, but at least the Naked Juice also has vitamins and minerals,” she says. “Compare that to a soda, which has nothing except for calories. If somebody’s on-the-go or they have a day when they haven’t gotten any fruits and vegetables, these drinks can be a way to get some nutrition in.”

Some sugar from fruit juice isn’t necessarily a bad thing, either, she says, especially for people who are physically active and consuming an appropriate amount of calories overall. “Sugar equals carbohydrates equals energy equals fuel,” she says. “I’d rather somebody eat a whole vegetable or a whole apple, but drinking a green juice is certainly better than nothing.”

The fact that Naked Juices’ veggie drinks are predominantly orange- and apple-flavored don’t bother her either. “It’s all about consumer taste,” she says. “If they really put 100-percent kale juice on the shelf, very few people would buy it. People don’t like the taste of vegetables that much.”

The key, she says, is knowing what you’re drinking—and making sure that it’s just one component of an overall healthy, balanced eating plan. Don’t guzzle fruit (or veggie) juices in excess; don’t use them as your sole source of produce; and don’t buy a product without reading the label.

Keep those guidelines in mind, and the occasional green drink or berry blend can be a delicious part of your diet. 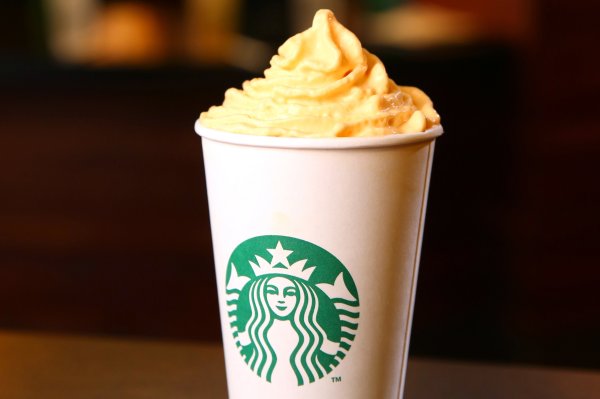 You Can Now Get Pumpkin Spice Whip On Your Starbucks PSL
Next Up: Editor's Pick