China Will Resume Limited Imports of U.S. Beef After a Ban Long Seen as Political

A herd of Texas Longhorn cattle, belonging to the Searle Ranch, leads the annual National Western Stock Show parade as it makes its way up 17th Avenue in Denver on Jan. 7, 2016
Helen H. Richardson—Denver Post/Getty Images
By Hannah Beech / Shanghai

For 13 years, people living in China couldn’t savor an American steak. But new regulations announced on Thursday mean that some American beef is welcome back in China, reversing a ban instituted after an outbreak of mad-cow disease in the U.S. in 2003.

Chinese officials will still limit U.S. beef imports, only allowing in cattle younger than 30 months. Exactly how American cattle traders will contend with Chinese quarantine requirements is not yet clear. But for an American industry that relies increasingly on global demand, especially amid a declining taste for beef at home, the China news is welcome. (Chinese restrictions on Canadian beef are also being lifted.) “The United States produces the highest-quality beef in the world,” said U.S. Secretary of Agriculture Tom Vilsack in a statement, “and China’s 1.3 billion consumers are an important market for U.S. producers.”

With the world’s largest population and a growing — and hungry — middle class, China now consumes 28% of the world’s meat supplies. Much of that appetite centers on pork, which is so adored in China that when people refer to “meat,” it simply means the flesh of the pig. In fact, Chinese eat half of the world’s pork. But if current consumption trends continue, Chinese will also gobble up nearly half of the world’s beef by 2030, according to the NGO WildAid.

The ban on U.S. beef felt more political than solely safety conscious. After all, the Chinese meat industry is itself seriously tainted: decades-old frozen flesh, glow-in-the-dark pork, meat so pumped with steroids that consumption causes athletes to fail drug tests, even rat that’s passed off as lamb. Earlier this month, Chinese police seized a large shipment of meat soaked in bleach.

“You should ask the central government the reason for the ban [on American meat] and the reason for lifting it,” says Chen Wei, the vice chairman of the China Meat Association. “Because of the ban, we were not able to communicate with our American peers. Now we can.”

Meat isn’t the only product to have been caught up in international politics. After 300,000 Chinese children were sickened by milk powder that domestic dairies had laced with melamine, the Chinese government began banning or limiting imports of some foreign milk powder that parents were using to nourish their children. Families resorted to smuggling in infant formula from overseas, even as Chinese customs officials learned how to identify telltale milk canisters through airport x-ray machines. Meanwhile, yet another baby-milk-powder scandal erupted earlier this year when it turned out that a Chinese factory was churning out tins with counterfeit labeling.

Beyond politics, Chinese officials are urging the local populace to eat less meat — both domestic and foreign. In order to boost national health and lower the greenhouse-gas emissions and water pollution resulting from livestock farming, China released dietary guidelines in May that set the advised meat-consumption limit at no more than 75 g of meat per day. Currently, the average Chinese eats around 170 g of meat per day, up from less than 30 g in 1978, according to a report by NGO WildAid. (By contrast, the average American wolfed down 246 g of animal flesh a day, according to a 2015 OECD study.)

Still, it’s likely that meat consumption will continue to expand in China, fueled in part by imports. The U.S. Department of Agriculture estimates that this year’s Chinese imports of beef and veal will be double that of 2013. Chief to profit have been cattle producers from Australia, New Zealand and Uruguay.

“The Chinese people’s habit of consuming meat has changed as their living standard has improved,” says Chen. “Some people said red meat might cause cancer but I think for some groups, especially children, athletes and pregnant women, red meat is still a must.” 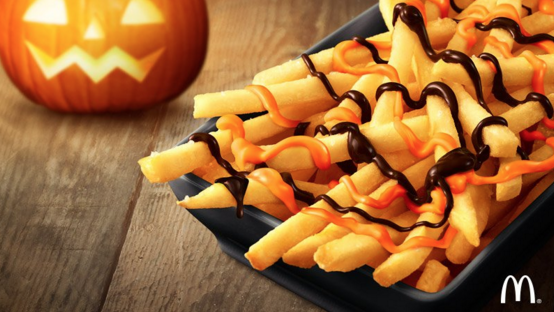 McDonald's in Japan Is Making Pumpkin Chocolate French Fries
Next Up: Editor's Pick