People interested in their personal metrics have long flocked to wearable devices, which track movement and sleep patterns, but a new study reveals they don’t seem to help people lose weight.

“The whole hypothesis was that [wearables] would be helpful, and they worked just the opposite,” says study author John Jakicic of the University of Pittsburgh. “But that makes [the study] even more intriguing.” (Jakicic has ties to Weight Watchers International and has received funding from wearable maker Jawbone Inc. for some of his past research.)

In the new report, published Tuesday in the Journal of the American Medical Association, Jakicic and his fellow researchers assigned about 470 people who were overweight into a weight loss group for two years. One was a standard weight-loss intervention group, in which people were assigned a low-calorie diet, increased physical activity and group counseling; the other group did the same thing, but adopted wearable technology six months in. The researchers included people between ages 18 and 35, an age group that would be more likely to embrace technology like wearable trackers, the researchers suspected.

About six months in, text message prompts and telephone counseling were added to both groups. The people in the standard weight loss group started self-monitoring their diet and exercise using a website. The people in the technology group were given a wearable device to monitor their exercise and diet.

Why the wearables didn’t help people lose more weight than the other group was puzzling. Jakicic and his team don’t have a reason, but they have a few ideas. It’s possible that when the people saw their physical activity throughout the day, they felt a false sense of security that since they had walked so much, for example, they could eat more. On the other hand, Jakicic suggests wearables may not be encouraging for the people in the study. “These are people who are already struggling, and already don’t like activity,” he says. “They look down and see, ‘I am so far away from my goal today, I can’t do it.’ It could be working against them.”

The researchers used BodyMedia Fit activity trackers, which were a common brand when they started the study years ago, but many more wearable tracking devices exist on the market today. “We are going to get criticized for that, but at the end of the day, there are studies that show that after a few months people get bored with them,” says Jakicic.

Jakicic says he hopes what people take away from the study is that there are other key behaviors that are important for weight loss that people should continue to focus on for long-term success, like eating well and exercising. “There’s probably a time and place for wearables, and there’s so much more we need to learn about them,” he says. “For the person who finds wearables engaging, absolutely use them.” 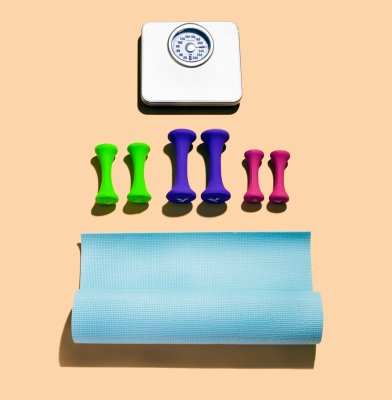 Almost a Third of Older Adults Don't Move Enough
Next Up: Editor's Pick