To most Americans, the U.S. military may as well be a foreign country. Only 1% of the nation’s citizens have served in uniform since the 9/11 terror attacks 15 years ago Sunday, where many of them waged two wars. Those who did serve internalized a set of customs, rituals and traditions distinct from the rest of the country.

It is Donald Trump’s obliviousness to that distinction that upsets many who wear a uniform. Trump polls well among veterans as a whole, since they are more likely than the rest of the electorate to be older, white and male. But his support seems to wane among those who have made the military a career, especially officers who have commanded at the highest levels. They are the ones who serve as that delicate synapse between young Americans willing to die for their country, and the elected leaders who order them to be ready to do so.

Some of Trump’s first shots heard around the Pentagon’s E-ring were more tone-deaf than anything else. He called the Navy pilot-turned-Arizona-GOP-senator John McCain “not a war hero” for being captured in Vietnam. He disparaged the sacrifice of a Gold Star family who lost their son in Iraq. At one point in the campaign, he suggested committing war crimes, like targeting the families of Islamic State terrorists. Others were falsehoods. “I know more about ISIS than the generals do,” he declared last November. “Believe me.”

More recently, he has betrayed an ignorance of the checks and balances that guide, and limit, an American president’s control of the U.S. military. “Mr. Trump does not seem to realize that active-duty generals are long-serving, apolitical professionals who do not belong to any one Administration or President,” says David Barno, a retired Army lieutenant general who commanded all U.S. and allied forces in Afghanistan from 2003 to 2005. “On January 20th, there won’t be any Trump generals or Clinton generals. There will only be America’s generals, no different than today.”

If he had been serving in the military, Trump’s comment last week comparing President Obama unfavorably to Russian President Vladimir Putin could have landed him in trouble under Article 88 of the Uniformed Code of Military Justice, which bars “contemptuous words against the President.” And he has run afoul of several other UCMJ articles. But the code applies only to those in uniform. His time at the New York Military Academy, like the Purple Heart he recently accepted as a gift, don’t count.

But it’s what Trump said about the nation’s generals—officers he would inherit were he to be elected, and who have sworn to obey his orders—that was more shocking. “I think under the leadership of Barack Obama and Hillary Clinton, the generals have been reduced to rubble,” he said. “They have been reduced to a point where it’s embarrassing for our country.” Typically, Trump tried to soften his attack on the nation’s generals by blaming their civilian overseers.

Yet there’s a second way of hearing that comment, and that is how it was heard by many in uniform: that the nation’s top military leaders, sworn to uphold the Constitution and obey their civilian bosses, lacked the backbone to stand up to that very same civilian leadership. You don’t have much choice in the military: you give your best advice, you hear what the President decides, and you carry out that order to the best of your ability or resign your commission. Trump suggested a general house-cleaning if he’s the next commander-in-chief. “They’d probably be different generals, to be honest with you,” he said last Wednesday, when pressed where he’d seek guidance about defeating ISIS.

That could lead for an uncomfortable first meeting between Trump and Marine General Joseph Dunford, whose first two-year term as chairman of the Joint Chiefs—the President’s key military adviser—runs until September 2017. In fact, Trump will inherit a relatively new slate of Joint Chiefs’ members. A President Trump would have to get along with them, ignore them or fire them.

Legally, a President Trump would have the power to fire as many generals as he wanted. “A President is the commander-in-chief and can dismiss any commissioned officer,” says Eugene Fidell, a military-law expert and co-founder of the National Institute of Military Justice. “Otherwise you wouldn’t have civilian control of the military.” The UCMJ details what an officer can do if dismissed by the President, making clear the commander in chief has that power.

Beyond such drastic actions, there are checks and balances built into the nation’s military-command structure to keep it from swaying too much amid civilian political winds. Officers nominated for senior positions are scrubbed by the Senate Armed Services Committee, which holds public hearings on the nominations. The full Senate must approve such appointments. Top officers usually hold their positions for two to four year. (A chairman of the Joint Chiefs generally serves two two-year terms, requiring a pair of politically-charged confirmation hearings. Service chiefs usually get a single term.) Most of the nation’s 38 four-star officers serve a two-year term, with a customary one-year extension.

These terms don’t mesh with the political calendar, which is why military officers from one Administration don’t change when a new President takes over. But senior officers do take on the leanings of their political masters. While publicly apolitical, every day senior officers make decisions that cast them, to over-simplify, as either liberal or conservative. After eight years in office, an Administration, by tapping officers in sync with its policies for promotion, ends up with a high command that sees the world pretty much the same way as the White House that has given it command.

But the military is structured to make it difficult for Trump to carry out a quick backwards coup. There are two key sets of generals (and admirals) in charge of the U.S. military. The seven-member Joint Chiefs of Staff are largely responsible for recruiting, training and outfitting the nation’s soldiers, sailors, airmen and Marines, and advising the President on military matters. But they don’t actually run the wars. In fact, none of the members of the Joint Chiefs is in the chain of command that runs from the Oval Office to the grunt in the foxhole. The officers running the wars—so-called combatant commanders—are responsible for their slices of the world.

Anthony Zinni, a retired Marine general who ran Central Command from 1997 to 2000, doesn’t fault Trump for wanting his kind of officers. “I think a President should have the generals he feels most comfortable with,” he says. Besides, there has long been a turnstile style to U.S. military leadership. “In Afghanistan, we relieved and assigned generals on a rate of one a year,” Zinni says. “When I did an assessment there in 2010, I counted 10 commanders in 10 years, seven Centcom commanders, five chairmen of the Joint Chiefs of Staff, and eight lords a-dancing.”

The nation has always wanted its military leaders detached from the messy business of partisan politics. General and flag officers generally have been removed from their billets only for misconduct, a failure on the battlefield, or screw-ups inside the bureaucracy. Any removal for political reasons, real or imagined, runs the risk of turning the U.S. military into a costly version of the Iraqi military, where troops have failed to follow the orders of their politically-pliable “leaders.”

For his part, Dunford has made it clear that he and his troops must stay above the political fray. The U.S. military “must conduct itself in such a way that the new Administration has confidence that it will be served by a professional, competent, and apolitical military,” Dunford recently told the nation’s 1.4 million troops. “This is especially important in the context of delivering the best military advice.”

Even if a President Trump doesn’t want to hear it? Well, the Senate has already made clear to whom Dunford—and all senior officers—owe their allegiance. “Do you agree, when asked, to give your personal views, even if these views differ from the Administration in power?” McCain. the head of the armed services committee, asked Dunford at his confirmation hearing 14 months ago.

“I do, chairman,” Dunford replied, without hesitation. 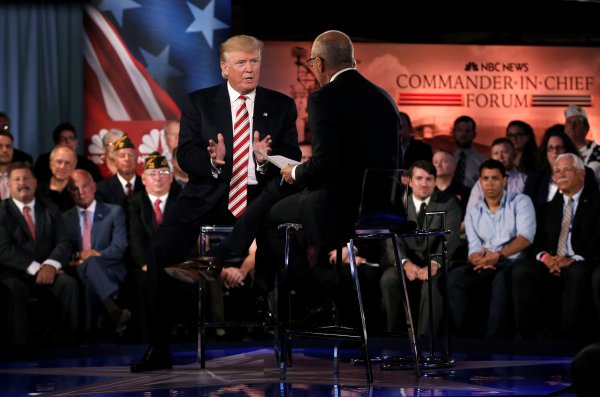 An Unsatisfying Clash
Next Up: Editor's Pick