Nearly 90 retired generals and other military figures endorsed Republican presidential candidate Donald Trump on Tuesday. Hillary Clinton fired back Wednesday, releasing the endorsements of 95 former military officers, trumping Trump by seven. “Clinton is getting the backing of more senior military service members and former officials with command and management experience than any non-incumbent Democrat due to her proven record of diplomacy and steady leadership on the world stage,” her campaign announced. “Donald Trump, on the other hand, lacks the knowledge, stability and values to be Commander-in-Chief.”

The firepower assembled by both sides could come up Wednesday night during a “commander-in-chief forum” sponsored by the Iraq and Afghanistan Veterans of America. In back-to-back appearances, Trump and Clinton will discuss military and veterans’ issues before an audience of troops and vets. In the past, these kinds of issues were generally debated throughout campaigns; veterans today increasingly resemble a special-interest group.

The warring platoons of military backers makes for a strange form of military competition. “It is unfortunate that both parties are now engaged in a sort of arms race to gather partisan endorsements from former military officials,” Charles Dunlap, a retired Air Force major general and lawyer who now runs the Center on Law, Ethics and National Security at Duke University. “Collective partisan political activities based almost exclusively on the participants’ former military affiliation are especially troubling, and inconsistent with the proper role of retired senior officers in a democracy.”

The trend contributes “to the perception, and perhaps reality, of the politicization of the armed forces,” adds his Duke colleague, Peter Feaver, an expert on civil-military relations. “Each side does it because each believes, perhaps rightly, that if they unilaterally disarm then that confers too much of an advantage to the other side,” he adds. “But once there are dueling lists, it is not clear that anyone benefits significantly.”

After all, it’s not like the military knows what’s best. The U.S. hasn’t won a war since the 1991 effort to push Saddam Hussein’s army out of Kuwait. And even that led to the aptly-titled Triumph Without Victory: The History of the Persian Gulf War (and the decades of woe that have followed). For the past 15 years, the U.S. has been bogged down in conflicts in Afghanistan and Iraq.

So why should voters listen to ex-generals? In part, it’s because Americans hold their military in high esteem. The latest Gallup poll shows it’s the U.S. institution that citizens hold in highest regard (73%), with the presidency, at 36%, and Congress, at 9%, far below. The generals’ endorsements are sought not because of whom they are, or how many wars they’ve won, frankly, but because they bask in the glow given to GI Joe and Jane since 9/11. There’s a profound sense of gratitude (and, absent a draft, guilt) among Americans toward troops willing to salute and carry out the nation’s orders.

While Trump exasperates many former military leaders, he polls well among the troops, at least according to a non-scientific survey conducted by the independent Military Times newspapers. A CNN poll released Tuesday highlights the fluidity of the race when it comes to national security: he does better when it comes to combating terrorism (51-45%), while she gets the edge when it comes to serving as commander-in-chief (50-45%).

The nation’s most-recently retired top military officer doesn’t like his former comrades choosing sides. “Politicians should take the advice of senior military leaders but keep them off the stage,” Martin Dempsey, an Army four-star general who retired as chairman of the Joint Chiefs from 2011 to 2015, said after a pair of retired generals appeared at the recent political conventions, one backing Clinton and the other backing Trump. “They have just made the task of their successors—who continue to serve in uniform and are accountable for our security—more complicated. It was a mistake for them to participate as they did. It was a mistake for our presidential candidates to ask them to do so.”

Yet not all who have worn the uniform agree. “Who should speak on security affairs to our nation? Professors? Anti-war activists? Pot-bellied defense lobbyists grubbing for blood-money? Think-tank creeps with narrow shoulders and massive egos?” asks Ralph Peters, a retired Army lieutenant colonel. “Shouldn’t we also lend an ear to those who have actual and lengthy military experience?”

Retired Army colonel Andrew Bacevich, who has criticized the nation’s post-9/11 wars, also doesn’t find rolling out military brass like so many artillery pieces particularly disturbing, so long as their opinions are given proper weight: “A retired general is no more competent to comment on presidential politics than is a retired dentist or a retired ballet dancer.”

But their bugle calls, Bacevich adds, miss the point. “I’d be more interested in hearing their views on why the U.S. military seems incapable of winning,” he says. “There, oddly, they have nothing to say.”

With reporting by Tessa Berenson, Philip Elliott and Zeke Miller 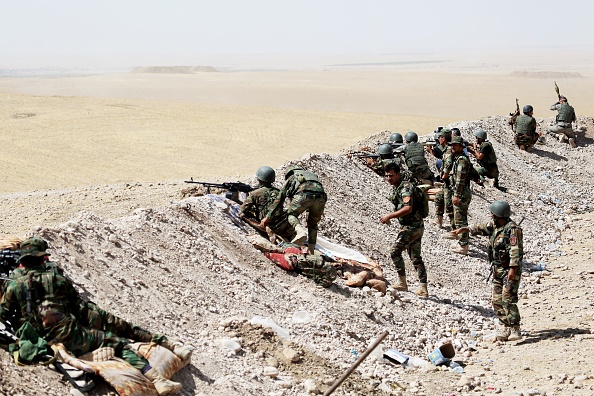