Robert Mugabe Ruled Zimbabwe for Decades. Here's How He First Came to Power

It’s not hard to see why Robert Mugabe, whose death was announced Friday, would have wanted control.

In 1965, the area in Africa then known as Rhodesia — the colonialist name for the region that’s now Zimbabwe — had established a new regime in the wake of British colonial rule. When the country’s white-supremacist leaders declared its independence late that year, TIME noted that it was “the first nation in history to launch itself into a world all but unanimous in its hostility.” The U.N. also called it an “illegal racist minority regime.”

By the time a decade had passed, it was clear to all — except maybe some white Rhodesians who were in denial — that the regime would not last much longer in the face of guerrilla resistance at home and disapproval around the globe. In a desperate attempt to stall the coming change, black activists were routinely jailed. Robert Mugabe, a one-time schoolteacher who had become a radical guerrilla, was one of them.

When Prime Minister Ian Smith finally conceded that he would allow the nation’s black majority to assume control of their own country, Mugabe was an obvious contender for leadership. But there was conflict over how exactly the transition would take place: “For years black nationalists have been divided between relative moderates, such as Bishop Abel Muzorewa and the Rev. Ndabaningi Sithole, and the more extreme forces, which now call themselves the Patriotic Front, headed by Joshua Nkomo and Robert Mugabe,” TIME noted in 1977. “The moderates, while willing to accept a gradual transfer of power, have also been insisting that black Rhodesians be allowed to choose their leaders in free elections. But the Patriotic Front wants first to take power and then hold elections.”

In 1978, the moderates won. Mugabe and his fellow Patriotic Front leader, Joshua Nkomo, swore they would not accept gradual change. They would keep fighting. Violence rippled throughout the area for about a year more before a compromise was reached. The country would host elections.

In early 1980, after a bloody campaign and election, Mugabe, then 56, emerged victorious. TIME reported:

“We are beginning a completely new chapter with the hope that there will not be any victimization of anybody for political reasons,” Mugabe told the magazine in an interview that week. When he visited the U.S. later that year, the leader of what had become Zimbabwe was greeted with cheers.

What Mugabe did with control, however, was less easy to explain.

Even among the cheering and an initial economic boom, guerrilla violence in Zimbabwe didn’t end. And in the years that followed, Mugabe’s grip grew tighter, and his feud with former ally Nkomo threatened to disrupt the entire nation in its wake.

Only about four years after Zimbabwe’s independence, Mugabe “declared his intention to transform the former British colony into a one-party Marxist state,” as TIME put it.

Violence and corruption marked the land-redistribution plan he implemented. Rivals were beaten. Protests were kept quiet. In the face of authoritarian rule and disasters like drought, the population suffered mightily. In 2007, TIME summarized that his “rule has yielded 1,700% inflation, an 80% unemployment rate and average life expectancy of 35, the lowest in the world.”

When Mugabe lost an election in 2008, he demanded a recount, from which his opponent Morgan Tsvangirai withdrew, and followed that by shutting down international aid within the nation. Even after agreeing in 2009 to share power with Tsvangirai — who would be the Prime Minister to Mugabe’s President — he refused to cede power for nearly a decade more, eventually resigning in 2017.

And, all along, Mugabe — having once fought so hard for power — held onto it. 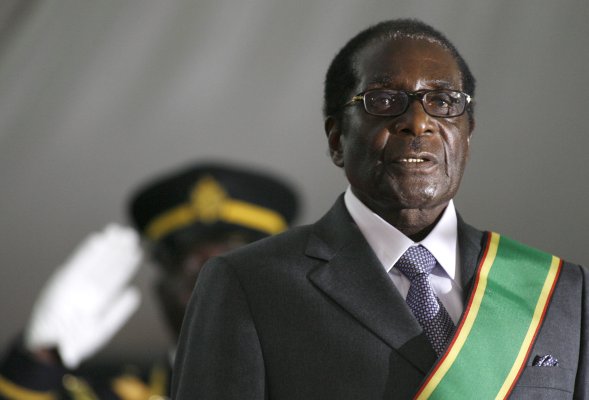 Robert Mugabe, Zimbabwe's Ex-President, Dies at 95
Next Up: Editor's Pick