21 Times Amy Schumer Proved She Was Hilarious on Instagram Too

Amy Schumer’s first book, The Girl With the Lower Back Tattoo comes out Tuesday—and it’s just one of several irons the comedian has in the fire.

Thanks to Schumer’s female-forward comedy, she’s become a darling of the fashion magazines of which she pokes fun. Schumer’s Instagram account is a consistently enjoyable performance piece because her life is a series of moments and events for which she doesn’t have the right outfit. You don’t even have to be a 20-something woman to relate.

Whether it’s using her hand as a cake plate or bargain shopping on a motorized scooter, each post offers something to aspire to. Even Meryl Streep recently named Schumer as her dream pick to play her in a biopic—so you know she’s a winner.

Here’s a look at her 21 funniest moments on social media.

1. Schumer is always trying to steal Kimye’s thunder. She even purposely fell in front of them for the photo opportunity of a lifetime at the TIME 100 Gala in 2015. So welcome to the most recent of countless posts tagged with the designer “Balmain.” She constantly shares that she’s a wannabe key member of the Instagram-popular Balmain celebrity-model A-team, usually from her couch. Schumer has continually failed to make the cut, despite her alluring pictures—like this one—of balled meat.

2. When she announced the invention of hand cake, a no-utensil dessert, in a video she took on the set of a glamorous fashion magazine photoshoot.

3. When she posed for her fake normcore Balmain ad with a dog who had zero interest in her.

4. When she realized she was destined for a life of mediocrity because her outfit matched the decor.

5. When she wore this jaunty hat for a retro sitdown along with her stone cold assassin sister, Kim Caramele.

6. When she cruised through the Target stationary aisle incognito, sliding on the scene in a motorized scooter like a boss.

7. When she played along with her trolls who were certain she got calf implants by sharing how pumped she was about her cool new fake legs.

8. When she iced a food injury with more food, tagging Fergie’s ode to dairy and hot mothers like Kim Kardashian and Chrissy Teigen, “M.I.L.F. Money“—and, of course, Balmain.

9. When she shared how little she cares for her mentor, Colin Quinn.

10. When she, seemingly a bottle of booze deep, gamely modeled this half-mermaid, half-lumbersexual look.

11. When she epitomized photogenic effortless poise in a tropical locale, noting her fame levels discreetly, as a class act does.

12. When the bombshell took to her mental sancutary, the beach, wished her trolls well, reminded her followers to embrace their bodies, and gave a TRL-esque shout out to her style icon, Miss Trunchbull from Matilda.

13. When she narrated her own celebrity sighting wearing boots she bought at the huntsman store.

14. When she pretended to date Nas at the Met Gala and was believably surprised about it.

15. When she justifiably considered suing a tabloid for their wrongful exclusion of the Schum in their bad celebrity chins round-up. After all, she’s the woman who first created the term at-risk chin, and she was nowhere to be found. Poor journalism of the lowest form.

16. When she recreated “Jenny From the Block” by Jennifer Lopez with her color-coordinated friends. Bridget Everett was there, so it was perfect.

17. When she again refused to give Colin Quinn the time of day as he warned her that her show was trash, likely due to her being power-drunk or just plain old smashed.

18. When she reminded everyone of her impeccable fabulousness by alerting the media to her off-duty model look, embodying the best version of herself in this swaggy getup fit for a founding father.

19. When she reminded everyone that her skin is flawless.

20. When she pretended to be a cranky high fashion model.

21. When she pretended to be rolling up to Puffy’s white party even though calling Diddy Puffy and his white party are two things that haven’t happened in years.

This is the elegant life of Amy Schumer. 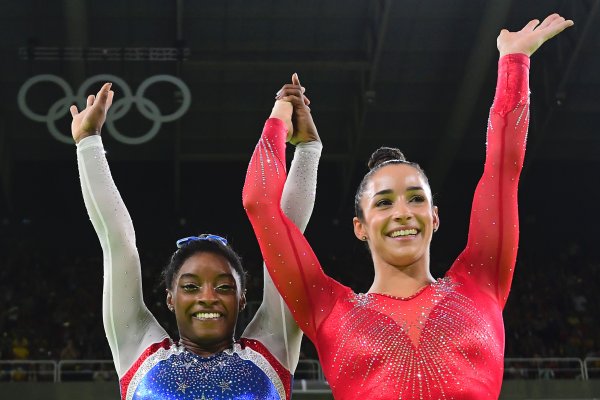 Simone Biles 'More Happy' For Aly Raisman Than For Herself
Next Up: Editor's Pick