I’m a Christian With Stage IV Cancer. I Want Death With Dignity.

I’ve had cancer now for four years. I was diagnosed with stage-three lung cancer in 2012. It was a surprise to my family and to myself. I don’t smoke. I exercised regularly. I was 58. I didn’t expect to still be here. But my mantra is: no coincidences. God has a plan for what I do and where I should be.

I watched the hearings about California’s End of Life Option Act, knowing that it could affect me personally. The act, which as of June 9 became law, allows citizens with six months or fewer to live to legally seek from their doctors a lethal dose of medicine—most of the time a fast-acting barbiturate like Seconal. After an approval process involving, among other checks, two verbal requests and a written affirmation signed, dated and witnessed two days beforehand, they can take the drug to end their lives. Their death certificates will not name the cause of death as suicide.

As a lifelong Christian, I had questions. These laws exist in Oregon, Washington, Montana and Vermont, and are currently being considered by legislatures in Michigan, New Jersey, Utah and Washington, D.C.; a referendum will likely be on Colorado ballots in November. Some of the primary adversaries of these laws have been Christians who view the practice as suicide. They don’t call it “medical aid in dying” or “death with dignity,” like I do. They call it “assisted suicide.” They believe the acts are against Christian doctrine, which sees suffering as part of God’s plan and the demolition of one’s body as the destruction of a temple of the Holy Spirit.

But the more I learned about the safeguards and autonomy in the law, and the more I prayed about it, having seen people suffer so much at the very end of their lives, I came to believe in that it fit into my faith. I found comfort in this law.

The day before the vote, I went to meet with some California legislators who might have voted against the law, particularly strong Christians. By the end of hearing my story, they expressed compassion, even tears—from the toughest people. I think when you look at a personal experience, governing doctrines from a church don’t seem to matter nearly as much.

After the removal of the right upper-lobe in my lung in 2012, I had several rounds of chemotherapy. At that time, doctors said the cancer was incurable. In March 2015, we discovered the lung cancer had metastasized to my brain, neck and chest. I had Gamma Knife radiosurgery for the tumors in my brain, then chemo and six weeks of general radiation. In January 2016, the cancer recurred in my brain. I had a second Gamma Knife surgery, but the cancer has not halted.

Recently, I’ve had some headaches. I feel like my breathing has become a little more labored. My family and friends notice it. What keeps me going is a combination of the love of family and friends, maintaining a positive attitude and my deep faith.

I’ve always been a devout Christian, starting with my early family life. My mother’s a Christian, and while my father didn’t go to church, he lived a Christian life. Growing up in San Francisco, my sister and I worked with the youth at a Presbyterian church. Every day I read Jesus Calling, a devotional by Sarah Young. I keep my Bible close and have Bible studies with my sister and my daughter.

Right now, my faith is probably stronger than it’s ever been, because I’ve felt God’s presence through this experience. One California Assembly representative who is an evangelical Christian asked me if I prayed, asked me if I went to church, asked me about the law: “Isn’t this suicide?”

What opponents to medical aid in dying don’t understand is that suicide by people who wish to die is very different. The terminally ill wish to live.

Oregon’s 2015 annual report on the state’s Death With Dignity Act found that since 1998, when the law took effect, of the 1,545 patients who received the prescription, only 991 ingested it. We’re not all just getting this drug as soon as we can get it. We’re holding on to every last breath.

If I wanted to end my life, I could have declined surgery in 2012. Or refused the chemo and radiation treatments in 2015.

The chemo almost killed me. It was an awful thing, to lie in bed. There was a point where I hardly had a heartbeat. And when you’re in that much pain, and you’ve just had lung surgery, and the chemo won’t let the surgery heal, you feel like you want to die. But I still have my mom, sister, kids, family and dear friends whose lives are deeply connected to mine.

Like many, I have the strong will to live. I love the time that I spend with my friends and family. Dinners, lunches, shopping. I still have my own consulting business. I love my backyard. I have really great hydrangeas, a waterfall. My mom, who is 92, and I sit in the back and just enjoy our time together. My kids, who are 26 and 29, want to take me to Italy. It’s just so devastating to think about leaving them. This is too early.

I won’t know what I’ll do until the time comes. I have faith I’ll know when that is—with my father, we knew. But if I’m looking at weeks, I want it in my cabinet.

Beyond my own suffering, I don’t want my family to have to see me suffer in my final days.

I have been by the side of family members and friends who passed away on palliative sedation in hospice, where we already prescribe drugs to terminally ill patients in intractable distress, to put them into a continuous deep sleep. Since they’re no longer able to eat or drink, they die from their disease or dehydration. Their bodies just shut down. One died peacefully: my father. Others have gone slowly and painfully.

A friend of mine—a lovely, intelligent woman who also had stage-four lung cancer—suffered for more than a week. I watched her come in and out of consciousness, in severe distress and pain, gasping for breath. Profusely sweating, shivering, screaming. Yet unable to communicate. Drowning in her own fluids.

If God grants us the intelligence to enable doctors to offer treatments that prolong life—that have prolonged my life—wouldn’t that same logic apply to those of us nearing the end of our life? When science can’t offer life-sustaining treatments anymore, then the role of medicine should be to relieve suffering.

I’ve talked to Dan Diaz, the widower of Brittany Maynard, an advocate for death with dignity who passed away in 2014. Within five minutes of taking the drugs, Brittany was asleep. And within a half-hour, she was gone—absolutely peacefully.

Will taking this drug affect my entry into Heaven? No. My Heaven is about believing in Jesus as my savior. And I’ve walked that journey.

And it feels a little weird to say I’ve been touched by God, but I have. I’ve prayed about this. And I have felt His presence. I think what God was showing me, This is the alternative. This is the peaceful way that I’m granting you to go.

I have seen myself taking the drug. I’m in my room, lying comfortably in my bed surrounded by my family, feeling peace and tranquility, embraced by God and those I love. 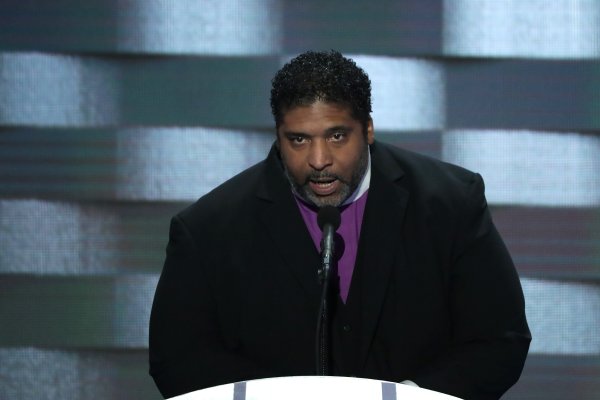 More Than Half of Black and Latino Workers Are Paid Less Than $15 an Hour
Next Up: Editor's Pick