Exclusive Interview: The 'Baby' Who Cried During Trump Rally Speaks

'These are some of my friends at a different Trump rally, in Colorado. They are also perplexed by some of his policies. —'Baby'
Evan Vucci—AP
Ideas
By Sarah Miller

So, if you don’t mind my asking, what made you start crying that day at Trump’s rally? Were you hungry? Tired? Colicky?

Can you say more about that?

If you give me some more Cheerios.

A whole box! Well, well, well! I am now prepared to be very forthcoming. If you’ll listen to the speech, you’ll see my wailing kicked in right after Donald Trump said, “I’m very close to China.” Very close to China? I’m confused—like, is China his mom? Then he said, “I have the biggest bank in the world as a tenant of mine,” and I cried even harder. Maybe I’m naïve, but I feel like I have a much better grasp on the verb “to have” than this man. He doesn’t have the bank, he has them as a tenant. The sentence should go: “The biggest bank in the world is one of my tenants.”

You’re very syntax-sensitive for an infant.

When you grow up in a house where Fox News is on all the time, you learn to read early. It’s my escape. So. I stopped crying for a few moments while I contemplated how Trump was trying to trick us all into thinking he indeed has the biggest bank in the world. That he OWNS it. Then, as it dawned on me that fully 40% of the people at that rally would leave saying to themselves, “Donald Trump has the biggest bank in the world, isn’t he amazing, I can’t wait until he’s president and we all get one of the banks China stole!” I started crying again.

I drooled on my mom’s keys. But when Trump started getting into the details of China devaluing their currency, I dropped them on the ground and started wailing again. I mean, what is it with this guy? He said China devalues its currency during “bad times” for the Unites States—”Every time we have like, a big problem, they always devalue.” And—sorry, can you get this disgusting mashed blueberry off my palm?

Much. Where were we? China! Right. All I’m saying is I know I’m just a baby but how old would you have to be to understand China isn’t sitting around like, “Oh, hey, you guys, let’s devalue our currency, the United States isn’t looking good right now!” Ugh. When someone is that clueless about economics and international trade, what is there to do but turn red and start screaming?

It was at this point he actually said he wanted you to leave?

Needless to say, the tenor of our experience changed. All the people who were smiling at us before and giving my mom understanding looks started, well, kind of growling at us. You know, their expressions kind of reminded me of my stuffed wolf, Randy! This one guy was like, “Why don’t you go breastfeed at a Hillary Clinton rally?” and my mother was like, “I’m not breastfeeding, I’m just holding a baby!” and the guy was like, “Same difference!”

Are things better for you at home than they are at Trump rallies? I talked to your parents earlier—they said you’re a pretty easy baby.

Hey, my parents are nice people. And I know they mean well, and I know they think I am the world’s greatest baby, because I am just always sitting there, with my big cute eyes wide open, looking adorable, because, well, I am a baby. But I mean, I just wish I could say to them, “Mom, Dad, listen. Being in a state of constant bewilderment that Sean Hannity’s voice is blaring through my home is not the same as happiness.”

Yeah. He’s obsessed with the wall. “I’m going to go help them build it!” It just seems cruel to point out that if you can’t install one of those BILLY shelves from IKEA in a man-cave without throwing tools that no one needs your help building a 1,989-mile-long wall. When he talks about it, I try really hard to poop and usually succeed.

Well, I don’t want to speak for him, but let’s just say his idea of a good time is seeing how many Pepperidge Farm fish he can fit onto his toy tank. I think he’s at pre-school right now but if you want to see a video of him playing Call of Duty my father’s posted a lot of them on YouTube.

And does your mother still like Trump after what happened?

She loves him even more! She thought it was hilarious—like he was teasing her like they’re friends. No, it’s like when he said, “I could stand in the middle of 5th Avenue and shoot somebody and I wouldn’t lose voters,” he was talking about my mom. 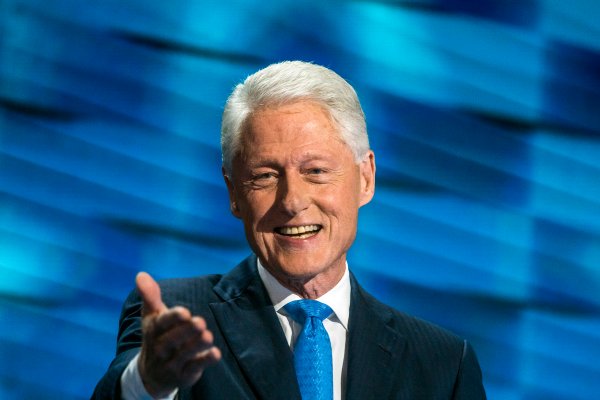 This Is What It Would Look Like If We Treated Bill Clinton Like a First Lady
Next Up: Editor's Pick