What Happens if Donald Trump Loses

If you only read one thing: The parlor game at the GOP convention last month didn’t center on the possibilities for it if Donald Trump won the White House. Instead it was what would happen if he loses—the likelier outcome according to polls, at least this week. Would Trump blame the GOP establishment for being insufficiently supportive, as the RNC and Speaker of the House Paul Ryan fear? Would he blame social conservatives for staying home, as Sen. Ted Cruz has wagered? Trump offered his first clue Monday when he declared at a rally in Ohio that he feared that the election would be “rigged” against him. He offered no proof other than the Democratic National Committee’s private efforts to back Hillary Clinton in the primary revealed in the recent email hack. The suggestion that the election could be fixed marks the latest upending of electoral norms by Trump, calling into question the very legitimacy of the campaign system. After Bush v. Gore, Democrats raised hell over the notion that the 2000 campaign was undemocratically decided, but that was by a co-equal branch of government. Trump’s assertion puts another obstacle in the way of unity after this most bitter campaign, as he and his supporters lay the groundwork to declare without evidence that the White House was “stolen” from him.

Hillary Clinton raised nearly $90 million in July, including $8.7 million in the 24-hour period around when she accepted the Democratic presidential nomination last week. According to her campaign she will report holding $58 million in the bank. Trump has yet to report his numbers. Clinton spent Monday in Omaha, where she is looking to pick up Nebraska’s second congressional district’s Electoral College vote.

Trump has extended the controversy over his criticism of the Khan family by yet another day, as he continued to defend his attack on the Gold Star family. While Trump may have technically been responding to a political attack, he revealed a political third rail the nation didn’t need revealing.

Buffett makes Trump an offer. Trump’s take on sexual harassment in the work place. And a top Jeb Bush aide quits the GOP over Trump.

Khan Confrontation Keys in on Human Decency — And That Could Haunt Trump
Comments that could be a bridge too far, even for Trump [Washington Post]

“I’m afraid the election’s going to be rigged. I have to be honest.” — Trump at an Ohio rally Monday, laying the groundwork for delegitimizing the election

“I’ll bring my tax return. He can bring his tax return.” — Warren Buffett promising to release his tax returns if Trump does the same while stumping for Clinton in Omaha

10 Things You Might Have Thought Were in the Constitution [TIME]

Paul Ryan Warns That Some Republicans Are Flirting With Progressivism [TIME]

Warren Buffett has an offer for Donald Trump [USA Today] 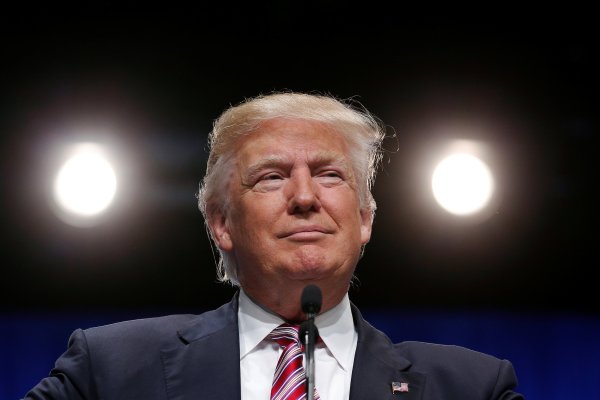 How Donald Trump's Divisive Campaign Is Hurting His Hotel Business
Next Up: Editor's Pick