Former US President Bill Clinton speaks on the second day of the Democratic National Convention at the Wells Fargo Center, July 26, 2016 in Philadelphia, Pennsylvania.
Ben Lowy for TIME
Ideas
By Sarah Miller

We are very close to having our first woman president, but let’s not forget that we’re quite possibly on the dawn of another monumental first. If Hillary Clinton wins in November, Bill Clinton will be America’s First Gentleman! FGOTUS! (BillyGOTUS?) The press has been abuzz this week with speculation as to what role the former two-term president might play in his wife’s campaign, given his considerable poise and charm. We caught up with the 69-year-old former president, dad, grandfather and vegan to see what special spin he’s going to put on this historic new role.

“I think I prefer First Husband,” Bill says with that signature twinkle in his eye as we sit down to lunch in the couple’s gracious Chappaqua home. The table is set tastefully with Monique Lhuillier China. “I have always loved her fashion aesthetic so she was a natural choice for us in the home,” Bill comments, “She’s so fresh and modern, but totally elegant.”

We help ourselves to an array of vegetarian dishes inspired by the Clintons’ travels around the world, and he points to each of them proudly. “This is sauerkraut, because Germany is one of our closest allies. This is moussaka, because of course Greece has been in the news a lot this year, and not necessarily for good reasons, but what can I say, we are a moussaka family! And this is a sweet potato, cauliflower and greens casserole—I saw the recipe in Southern Living and it just reminded me of things my mother used to make.”

I have to ask—did he do all this himself?

“Oh, no,” Bill laughs, “Hillary and I talked about this. I said, “You’re going to be so busy running for being President, I want to help out in any way I can, but I’m just not the best cook.” He smiled ruefully. “She told me that it would be enough for me to plan meals with the staff, and I said, well, surely that’s something I can do. Also, I do like being able to adjust the meal plans to my own vegan diet.” As he says this, he turns a little in his chair, and we are able to see the slim silhouette, so tastefully attired in the vintage Donna Karan. Bill gets his hands on whenever he can—rumor has it Bill was “devastated” when the designer and Dem Donor stopped doing menswear. Can this really be the man who, not so long ago it seems, used to jog to the McDonald’s?

“Deciding to take that crucial step by going vegan was one of the most important decisions I have ever made,” Bill says, “Not just for me, but for my whole family.” He tears up a little. “It has meant a lot to me to be able to share this diet with my daughter, to pass on the legacy of health to her.”

Since we’re talking about flavors here, dare we ask what his plans are for the White House décor?

“Well, it’s one of the things I am most looking forward to, of course,” he says. “I don’t know a lot about decorating, but I definitely have very, very strong opinions.” He pats a stack of folders at the end of the dining room table. “Obviously we don’t want to count all our chickens before they’re hatched, but I do have a list of interior decorators I am interested in sitting down with—only when it the time is right.”

But Bill wants to make sure Americans know that he’s going to be doing a lot more than keeping house. “I think it’s really important for me to be a role model.”

For this reason, he is planning on keeping up with his foundation, as well as his speaking engagements. Also, he adds, pointing out that the moussaka is made with cashew cheese, “I’m really hoping I can use my new role to introduce ordinary Americans to non-dairy cheese.”

He shows me his crossed fingers then laughs to himself.

“Hillary once said ‘I’m not just sitting here some little woman standing by my man like Tammy Wynette.’ I guess for me the analogy would be—hmm. Well. I can’t really think of an analogy! But hey, I want little boys to be able look at me and say to themselves, ‘If my wife is president one day I will be damned if I’m just going to sit around looking at fabric samples.'”

He shakes his head, serious for the first time since we began this conversation. “Sure, it’s important to make a nice home for my family, but I just couldn’t live with myself if little boys thought that’s all they were good for.” He shudders.

I have to remark that it sounds to me like his First Husband vision involves taking on some of the domestic opportunities that America really never had addressed during Hillary’s policy-focused stint as First Lady. Bill looks thoughtful.

“Interesting point,” he says. “I never really thought of that.” He checks his signature Shinola watch. “If you’ll excuse me for a minute, I have some chocolate chip cookies in the oven. I also have a call with Monique Lhuillier in a half hour. She’s helping me put together some looks for the convention. I don’t think I need to tell you—I am running out of ideas!” 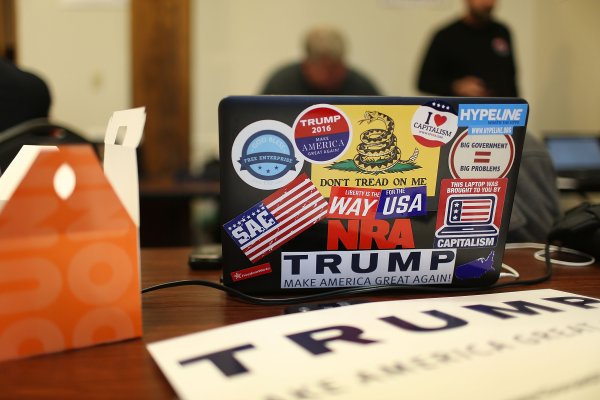 If Bernie Sanders' Staff Took Over Trump's Twitter Feed...
Next Up: Editor's Pick