Dear Mr. Trump: A Bridge Is Safer Than The Wall

Republican presidential candidate Donald Trump pauses during his speech at the Republican National Convention on July 21, 2016.
Jeff J Mitchell—Getty Images
Ideas
By Samuel Rodriguez
The Rev. Dr. Rodriguez is president of the National Hispanic Christian Leadership Conference and author of Be Light.

After Donald Trump’s speech ‪on Thursday night, the RNC and all of its choreographed political theater has come to a close. And we were left with the candidate himself taking the stage and proclaiming himself the candidate of “law and order.”

Trump is seizing upon the national zeitgeist: the murder of police officers has shaken the country; racial tensions have reached a violent boiling point; ISIS-sponsored terror rattles us at home and abroad. The speech lasted longer than 45 minutes, but Trump sent voters a single message: He is the candidate who will keep America safe.

Certainly there is much work to be done to protect our citizens. But Trump’s tough-guy persona started when he first struck the match of racial politics—and simultaneously lifted his poll numbers—when he referred to Mexican immigrants as rapists.

Trump’s campaign slogan “Make America great again” is perhaps only his second most famous line behind “Build a wall”. While this phrase galvanized working-class conservatives and helped propel him to an astonishing win in the Republican primaries, it also contributed to some of the greatest negatives any candidate has received in the history of presidential politics.

As a leader in the Hispanic community who works closely with Hispanic Evangelicals, I can assure you his rhetoric has cost him a significant portion of conservative Hispanic voters, many of whom voted Republican four years ago.

What Trump seemingly fails to understand is that many Hispanics support immigration reform and border security. Just like all Americans, Hispanics want safety for our citizens. Whether you support building a wall or not, it’s easy to understand why many reach for it as a solution to our broken immigration system.

But while we also want to honor those immigrants who have come here legally—and I cannot stress this point enough—we must also protect the lives of the 11 million undocumented immigrants that have already made their lives in this country. We cannot and must not unleash a deportation unit to forcibly remove undocumented immigrants. Doing so represents an affront to the sanctity of life.

Many of these people have lived here for decades. Their children attend our schools, speak English and hold within themselves dreams and aspirations deposited by American values. The United States must never allow political expediency, xenophobia or even legitimate concerns over immigration to lead us to policy that rips families apart.

Trump’s persistence on this issue underscores the much larger problem he has of failing to build bridges with Hispanics and other minorities.

You see, it’s not enough to simply say you want to keep America safe when you marginalize entire communities in the same breath. Hispanic citizens, even conservative ones, hear Trump’s words as a personal affront. These are our brothers, sisters, cousins and parents. They deserve to be spoken of with dignity. How can he expect to keep us safe when his rhetoric only serves to deepen racial divides inside our own country? We become weaker and endangered when we make enemies of each other.

To keep America safe first requires that we bring America together. Trump can pursue building a wall, but he must first build bridges.

As a pastor, I do not endorse candidates or political parties. Instead I meet and work with both sides in hopes of advancing policies that lift up the poor, protect religious liberty and give voice to the marginalized. The RNC revealed glimpses that distinguished the real Donald Trump from the caricature portrayed in the media. I choose to believe that the father, husband and American behind the showman hears and sympathizes with this message.

And so, I will continue to engage the political process, in hopes that some day soon my voice might join a powerful chorus shouting in unison for a common cause—one so loud that “build a wall” is drowned out and “build a bridge” becomes our nation’s most famous rallying cry.

Write to Samuel Rodriguez at president@nhclc.org. 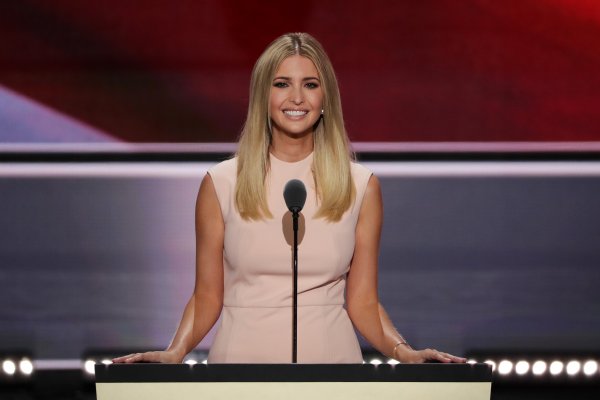 You Can Like Ivanka Trump and Still Hate Donald
Next Up: Editor's Pick