Heading into the Republican National Convention, I had been prepared for more of what’s been the case more or less since Stephen Colbert took over CBS’s Late Show last year. Colbert has neither been as incisive about politics as have been hosts including Samantha Bee and Seth Meyers, nor has he succeeded in the dopier celebrity shenanigans put forward by competitor Jimmy Fallon and network-mate James Corden.

Imagine my surprise that Colbert seems to have found the greatest level of energy he’s had in his entire Late Show tenure, all of a sudden. His first two of a series of live shows airing during the convention weeks were suffused with a spirit of fun that’s been missing, at times, from his broadcast.

On his Monday night show, Colbert teamed up with former Comedy Central colleague Jon Stewart, who’s been almost entirely off the scene since his departure from The Daily Show, and revived his own arch-conservative “Stephen Colbert” character from The Colbert Report; both Stewart and “Colbert” have been living in a cabin in the woods, unaware that Donald Trump has risen to electoral heights. While I was trepidatious about the sketch—in the main, nostalgia and actual comedy are two very different things—its spirit of glee wore me down, feeling as it did like something new for this Colbert show. Similarly, a sketch Tuesday in which the actress Laura Benanti played Melania Trump felt ruthlessly inventive, even though the concept (that “Melania” was giving an apology comprised of other famous quotes) was hardly reinventing the wheel. Even Colbert’s revival of his “Hungry for Power Games” sketch—one whose presence on the show I’ve never understood, borrowing as it does from a now-concluded film franchise that peaked in popularity in 2013—was deployed to great effect, simply because Colbert seemed more invested in the bit than he ever had before. His taking the stage at the Quicken Loans Arena (granted, before the convention had actually begun) brought this bit to its highest level of sheer brio yet. (After this, maybe we can retire it.)

The setting helped—Colbert was, for that taped sketch, on the ground in Cleveland. So, too, does the live aspect add a great deal. In his live post-Super Bowl broadcast this year, Colbert seemed a bit at sea, in large part due to apparent network requirements that he, say, interview the game’s MVP by phone, interrupting the show’s flow. Granted freer rein here, Colbert is as vigorously committed to finding the laugh as he’s yet been on CBS.

And some of those jokes really stick. A taped bit starring Keegan-Michael Key Tuesday night began with a simple premise—a black RNC attendee found himself surprisingly popular among all his fellow convention-goers. And yet things got chewier and more uncomfortable quickly; Key’s character found himself in a confrontation with unseen police, and the sketch ended with him sinking to the floor, removing himself from the frame. This was dark, challenging stuff by late night comedy standards, and a sign of Colbert’s moral imagination, forcing at least some of his coverage of the Cleveland spectacle to engage with the wider political scene.

Colbert’s burst of creativity comes at a very apt time, following his missing out on an Emmy nomination while Corden and Fallon were among the nominees, and speculation over his long-term fate at CBS that the host himself has just addressed in an interview with The Hollywood Reporter. (Unsurprisingly, he’s less than delighted by those who suggest he might be replaced by Corden: “The implication of that question is that the show isn’t good enough in its present position.”) It’s a change in fate that’s easy to applaud—Colbert is both, we know, more able than The Late Show at its least engaging and a figure one can’t help but root for. But it comes with a challenge: Colbert needs to figure out a way to keep the level of creative resourcefulness this high when he’s not doing special live broadcasts, when there isn’t an actual arena to host a Hunger Games homage and when he’s not carting out a much-loved character. The conventions are only two weeks a year, but Colbert, we can hope, will find a way to keep their energy. 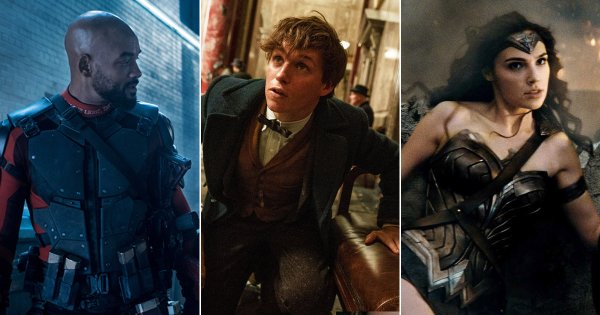 The Comic-Con Movies We're Most Excited About
Next Up: Editor's Pick