The Obama Administration didn’t do what it should have done before the 2012 attack in Benghazi that killed four Americans, and then compounded its negligence by trying to mislead the nation about what triggered the attack, House Republicans conclude in their final report into the fiasco.

The GOP members of the House Select Committee on Benghazi, set up nearly two years ago, released their report Tuesday, one day after their Democratic colleagues on the committee issued their own version, after complaining the Republican majority would not allow their views into a final, bipartisan report.

The dueling reports and remaining unanswered questions make clear that Benghazi, as a political issue, isn’t going away. It will be used by Republicans as Exhibit A as they try to make their case that Hillary Clinton is unfit to be elected President in November. Each report embraces its own version of what happened, and marginalizes evidence that doesn’t fit into its narrative. Events like Benghazi always seem easier to prevent in hindsight, when second-guessers focus on that event to the exclusion of everything else. Unfortunately, before they happen, the federal government and U.S. military are juggling thousands of balls simultaneously and have no idea what is about to unfold.

The Republican report says intelligence suggesting the Benghazi consulate and nearby CIA annex were inadequately protected should have pushed top officials like Clinton and Under Secretary Patrick Kennedy to order additional security. “It is not clear what additional intelligence would have satisfied either Kennedy or the Secretary in understanding the Benghazi mission compound was at risk short of an attack,” the report finds. The panel’s “new facts” offer little that changes the public’s understanding of what happened.

The GOP report suggests that the truth about what happened will never be known. Clinton’s “shameful” failure to turn over emails from that private server make it “impossible” to know all the details surrounding the attack. “The manner in which the secretary communicated during her tenure, the manner in which those records were housed and the manner in which the public record was self-scrutinized and self-selected makes it impossible to ever represent to those killed in Benghazi that the record is whole,” the report says. The CIA, Pentagon and State Department also dragged their feet when it came to cooperating with the panel, it adds.

“The committee report has not found anything to contradict the conclusions of the multiple, earlier investigations,” Brian Fallon, the Clinton campaign’s spokesman, said. “This committee’s chief goal is to politicize the deaths of four brave Americans in order to try to attack the Obama Administration and hurt Hillary Clinton’s campaign.”

The Democrats found in their Monday report that while security at the U.S. consulate in Benghazi, Libya, was poor, then-secretary of state Clinton never personally denied improvements. It also concluded that the Pentagon could have done nothing to save the four U.S. lives, including that of Ambassador Christopher Stevens.

“Benghazi” became a political buzzword as soon as it happened on Sept. 11, 2012, after the Obama Administration suggested an anti-Muslim U.S. video triggered a spontaneous mob attack. “WH [White House] very worried about the politics,” a State Department official noted, according to the GOP report. “This was all their doing.” Even as smoke continued to rise from the compounds, it became increasingly clear that at least some of the attackers, linked to al Qaeda, had been planning the attack, which took place on the 11th anniversary of the 9/11 attacks on the World Trade Center and Pentagon. “Obama Administration officials, including the Secretary of State, learned almost in real time that the attack in Benghazi was a terrorist attack,” GOP panel member Jim Jordan said after the majority report’s release. “Rather than tell the American people the truth, the Administration told one story privately and a different story publicly.”

House Majority Leader Kevin McCarthy, R-Calif., said last fall that the panel was created, in part, to derail Clinton’s White House bid. “We put together a Benghazi special committee. A select committee,” he told Fox News, after the panel uncovered the private email system she used while running the State Department. “What are her numbers today? Her numbers are dropping. Why? Because she’s untrustable.”

The Congressional probe hasn’t only split Republicans from Democrats, but Republicans from other Republicans. A pair of GOP members of the panel issued a harsh appendix without the formal endorsement of their five Republican colleagues on the panel. In their addition to the report, Jordan and Mike Pompeo of Kansas say the Obama Administration “never launched men or machines” to try to save those trapped in Benghazi. “We cannot say whether the military could have saved lives in Benghazi,” the pair added. “We will never know if a more vigorous, comprehensive, and urgent response could have saved lives.” The U.S. military has repeatedly testified there was no military action they could have taken that would have changed the outcome.

Other conservatives found the report, like the security at Benghazi, inadequate. “While the report from the Select Committee on Benghazi shines some light on widespread incompetence reaching the highest levels of government, I find it incomprehensible and insulting that this committee spent two years and $7 million in taxpayer dollars to release an 800-page report with no firm findings or conclusions,” David Bozell, head of the ForAmerica advocacy group, says. The panel’s failure to hold the Administration accountable “is the reason why American voters are turning to the likes of Donald Trump.” 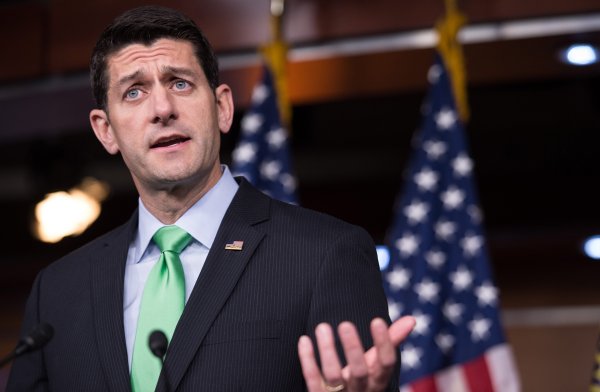