How Hillary Clinton Will Take on Donald Trump's Foreign Policy

A loose cannon who even Republicans don’t like? Or a harsh ideologue committed to dangerous ideas on subjects like abortion? A plutocrat who wants to cut taxes on the rich? Or a fraud who doesn’t mean what he says?

Members of the Brooklyn-based campaign and its allies have served up some version of each of those arguments against the presumptive Republican nominee. The voices sometimes contradict themselves, but reinforce a growing pile-on. Each makes a clear argument, but taken as a whole, they leave a muddled mess about why, exactly, voters should reject Trump.

Clinton will start to sharpen one line of criticism on Thursday, when she is set to deliver what aides are calling a major foreign policy address in San Diego.

“You will hear in her speech a confidence in America and our capacity to overcome the challenges we face while staying true to our values—a strong contrast to Donald Trump’s incessant trash-talking of America,” Clinton senior adviser Jake Sullivan told reporters late Wednesday. “She’ll make clear that the choice in this election goes beyond partisanship. Donald Trump is unlike any presidential nominee we’ve seen in modern times, and he is fundamentally unfit for the job.”

Clinton has previously called Trump unqualified for the Presidency, but aides suggested she would go further when she speaks in the address, criticizing his “America First” approach to foreign policy as misguided and his attacks on Mexico, China and Muslims as wrong. A second Clinton aide promised she would “rebuke the fear, bigotry and misplaced defeatism that Trump has been selling to the American people” and “make the affirmative case for the exceptional role America has played and must continue to play in order to keep our country safe and our economy growing.”

The former First Lady, New York Senator and Secretary of State has an undeniable leg-up when it comes to experience in this area, but Trump’s unconventional candidacy has made it harder to prosecute the case against him.

Trump has offered policy positions that typically are avoided by national candidates from either party. He has said he would ban Muslims from entering the United States for a period, round up and deport immigrants in the country illegally and encourage Japan and South Korea to develop nuclear weapons. He has said he’s open to ending or rolling back the United States’ role in NATO, stated a willingness to speak directly with North Korea’s Kim Jong Un and signaled ambivalence toward the British. But he’s also at times backed away from his own ideas, calling the Muslim ban merely a “suggestion” and saying he might make an “exception” for the new mayor of London, who is Muslim.

Now that the primary is winding down and Clinton is all-but-assured to win the Democratic nomination, she is working to win over Republicans and moderates, leaning increasingly on a foreign policy resume that is likely to attract serious students of how America works around the world. Many Republicans have said Trump would set the United States back decades and inspire waves of anti-American sentiments.

“America turning inward not only will make the world more dangerous for others, but also for us,” former Defense Secretary Bob Gates told a Washington audience last month. Gates, who led the Pentagon under both Presidents George W. Bush and Barack Obama, did not mention Trump by name.

“When you run for president of the United States, the entire world is listening and watching,” Clinton told CNN last month.

Despite her warnings, Trump runs about even in Clinton in polls when voters are asked who would best handle the United States’ national security. Trump’s bluster grates Washington’s foreign policy Establishment, but it riles up voters in the heartland who believe Trump’s slogan (“Make America Great Again”) is sound doctrine. His brand of nationalism helped him overtake candidates with more serious foreign policy stints on their resumes such as Senate Foreign Policy Relations members Rand Paul and Marco Rubio.

Clinton, who is viewed as too hawkish by some in her party, largely kept foreign policy a secondary issue during her own primary against Vermont Sen. Bernie Sanders and former Maryland Gov. Martin O’Malley. Instead, Clinton kept her focus on domestic issues that are popular among her party’s liberal base. It didn’t quiet worries about her instincts, but she is likely to officially win the delegates needed for the nomination next Tuesday, even if she loses California’s primary to Sanders.

Clinton is settling into her role as the party’s nominee, and she is still figuring out just how to take on Trump. With few voters paying attention at this point, she has some time to test out different approaches. But the campaign will have to find a broad theme soon enough, or it risks following in the footsteps of Trump’s 16 vanquished Republican rivals. 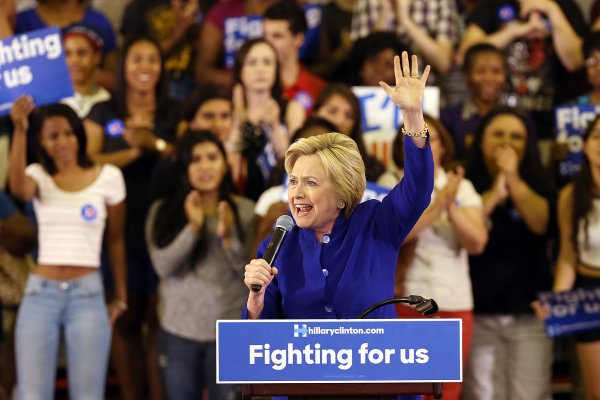