Jane Goodall: Slain Zoo Gorilla Was 'Putting an Arm Round the Child'

Jane Goodall, one of the world’s most renowned primatologists, wrote an email on Tuesday to the director of the Cincinnati Zoo, saying she thought the slain gorilla may have been protecting the boy who fell into the animal’s exhibit.

The scientist and animal rights activist extended her sympathies to the zoo’s director, Thane Maynard, amid national backlash over the shooting death of a 17-year-old western lowland gorilla named Harambe.

“I tried to see exactly what was happening—it looked as though the gorilla was putting an arm round the child—like the female who rescued and returned the child from the Chicago exhibit,” she wrote, according to the correspondence the Jane Goodall Institute made public. Goodall may have been referring to the 1996 incident at the Brookfield Zoo in Illinois in which a female gorilla carried a boy to safety after he fell into her pit.

“Anyway, whatever, it is a devastating loss to the zoo, and to the gorillas,” Goodall wrote.

Harambe was shot dead after officials said he dragged around a three-year-old boy who fell into its enclosure on Saturday. Authorities are considering possible criminal charges, a prosecutor said Tuesday.

Goodall also asked how the two other female gorillas living with Harambe reacted to the death. “Are they allowed to see, and express grief, which seems to be so important?” she wrote.

“I feel so sorry for you, having to try to defend something which you may well disapprove of,” she added.

Goodall declined to comment further, a spokesman for the Jane Goodall Institute told TIME on Tuesday. 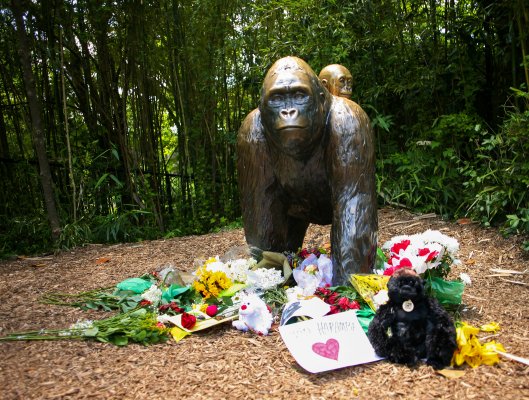