How the Hamburger Became an American Favorite

Molly Cranna for TIME
By Olivia B. Waxman

“National Hamburger Day,” which falls on Saturday, seems like a prime opportunity to dig into the history of the meat sandwich. Doing so, however, is more difficult than it may sound. Exactly who invented the first hamburger in the U.S. may remain as mysterious as its contents—several different places lay claim to having invented the dish—but several factors during the late 19th century may help explain how it became an iconic American food.

For instance, Andrew F. Smith, author of Hamburger: A Global History, argues that the food likely became popular as Germans immigrants opened up restaurants and started serving plates of ground beef in the form of a patty meant to be eaten with a knife and a fork. The method was “cheap, easy to do, and a way to make a little money on the massive amounts of scraps from slaughterhouses,” he says.

Early incarnations of this dish were also known as “hamburg steak” or “hamburger steak,” with the name said to come from the city of Hamburg in northern Germany, known for its quality beef. Hamburg steak appeared on menus at German restaurants in New York City in the 1870s. After a German restaurant served the dish at the 1876 Centennial Exposition in Philadelphia, it started appearing on menus at non-German restaurants, in cookbooks and in newspaper articles as far away as Chicago and North Dakota. Meat grinders became more popular after the fair as well, making the process of forming the patties more efficient.

In the 1870s, carts popped up to feed the growing number of workers who lived too far from their factory jobs to go home for lunch or dinner, and once they started being manufactured with grills, they were serving up hamburger steaks (as well as hot dogs, another American favorite) in the 1890s. “Street vendors weren’t giving it out with a plate and fork, so someone figured out you put a piece of bread around it,” says Smith. Some say the Chicago World’s Fair in 1893 may have helped get the word out about this sandwich, for it was shortly after that newspapers in Nevada and Los Angeles described the hamburger as a sandwich of chopped meat with onions, and the meal started appearing all over the country. Fans later began adding cheese and other condiments to enhance the flavor of the patties.

With “zoning laws and automobiles coming in, street vendors were essentially forced off the street, and that’s when diners come along and really small places begin to serve [hamburgers],” Smith says. Louis’ Lunch in New Haven, Conn., is an oft-cited example. In 1921, White Castle opened in Wichita, Kansas, giving burgers new life as a fast-food staple and jump-starting hamburger industry (which is why TIME named it ‘the most influential burger of all time’).

MORE: The Murky History of the Ice Cream Cone

So here’s the short answer to the question of who invented the hamburger, as Smith puts it: “Germans gave the hamburger its name and disseminated the idea of a patty, Americans made it a sandwich.” 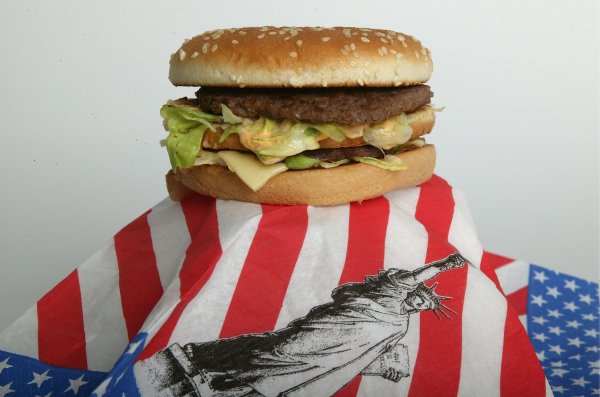 This Is What Julia Child Said About the Big Mac
Next Up: Editor's Pick