From left: Joel Edgerton, Ruth Negga, and director Jeff Nichols during the 69th annual Cannes Film Festival at the Palais des Festivals on May 16, 2016 in Cannes, France.
Laurent Koffel—Getty Images
By Stephanie Zacharek

It was just a few weeks back that an Old Navy ad featuring an interracial family, posted on Twitter, prompted a vicious outcry from social-media trolls, furious at the store for promoting “race mixing” in its advertising. A backlash against the backlash quickly followed, with hundreds of Twitter users posting pictures of their own interracial families, a ray of hope that most Americans are motivated by their best impulses rather than their worst. But the event was a reminder that our country—even taking into account recent victories in the area of same-sex marriage—isn’t as universally progressive as we want, and need, it to be. Slavery was abolished in this country in 1865, which makes it all the more astonishing that as recently as 1967, it was still illegal in some states for interracial couples to marry.

Jeff Nichols’ beautifully restrained Loving tells the story of Mildred and Richard Loving—played here by Joel Edgerton and Ruth Negga—a white man and a black woman who married in Washington, D.C. in 1958 and then returned to their home in Central Point, Va., only to be arrested for violating the state’s anti-miscegenation laws. The couple were sentenced to one year in prison, though the judge in the case suspended the sentence for 25 years if the Lovings would agree to leave the state. They moved to D.C., but by 1964 had become frustrated by the restrictions on their lives—they couldn’t even travel together to Virginia to visit their families. Mildred wrote a letter to Attorney General Robert F. Kennedy, whose office, almost miraculously, referred her to the ACLU. With the ACLU working on their behalf, the Lovings eventually won the right to live as a married couple in their home state. The 1967 Loving v. Virginia decision, making interracial marriage legal in all 50 states, was a landmark of civil rights legislation.

Nichols—director of Take Shelter, Mud and, most recently, Midnight Special—tells the Lovings’ story in a way that feels immediate and modern, and not just like a history lesson. The movie’s simplest elements—like the sight of Edgerton’s Richard Loving driving off in the morning to his job as a brick mason, not just in another town or county but in another state—are what make it most effective. In one scene, Life photographer Grey Villet (Michael Shannon) shows up to photograph the Lovings in their home, around the time they were awaiting appeal on the ruling that had driven them from their home state in the first place. Richard and Mildred sit in front of the television, laughing at The Andy Griffith Show, and Richard spontaneously sprawls across the couch, putting his head in Mildred’s lap. Villet, watching discreetly from across the room, snaps a picture without looking through the viewfinder, an action that could destroy the moment’s spontaneity. He’s a witness, as we are, to this scene of a couple trying to live a normal life under extraordinary circumstances. Nichols perfectly captures the immediacy, and the intimacy, of the moment.

Edgerton plays Richard Loving as quiet and thoughtful, a man more concerned with providing a living for his family than being a civil rights hero. Negga’s Mildred Loving is sweet-natured and open-hearted, with a soothing smile that could be a balm for any imaginable woe—but when she decides that she and Richard must fight for the right to live like any other married couple, her resolve becomes quietly formidable.

Loving is one of the highlights of this 69th edition of Cannes, and even if it doesn’t end up winning the Palme d’Or, Negga and Edgerton, both superb, certainly have a shot at the acting prizes, to be announced at the closing ceremony on Sunday, May 22. Though this has been an unusually strong competition slate, there have been a few surprising disappointments: Pedro Almodovar built an international name for himself with sometimes florid and often deeply moving melodramas, like his 1999 All About My Mother. His entry in this year’s festival, Julieta, is based on a trio of stories by Canadian writer Alice Munro, with the setting transferred to Madrid. But, uncharacteristically for Almodovar, Julieta has a distancing dryness—not even the picture’s wildly colorful production design (including crazily frosted birthday cakes and a few walls’ worth of eye-popping patterned wallpaper) can inject much life into it. And Cannes favorites Jean-Pierre and Luc Dardenne, who have won the Palme d’Or twice (once in 1999, for Rosetta, and again in 2005, for The Child), bring The Unknown Girl, an earnest but lukewarm picture about a doctor (Adèle Haenel) who becomes obsessed with solving the mystery behind the death of a young African immigrant.

Still, for almost every disappointment at this edition of Cannes, there has been at least one modest surprise: In Brazilian writer-director Kleber Mendonça Filho’s Aquarius, Sonia Braga plays a widow and retired music critic who’s being forced out of her seaside home by greedy developers. Filho uses the story as a means of addressing social issues in contemporary Brazil, but it’s also an engaging and deeply satisfying picture about the adjustments that come with aging, particularly the fear of being jostled out of place as the culture moves on. Braga gives a regal, imperious performance that’s sometime slightly over the top, but it’s impossible turn away from her: Whenever she tosses that dark, lustrous, magnificent mane of hair, she’s never less than magnetic. 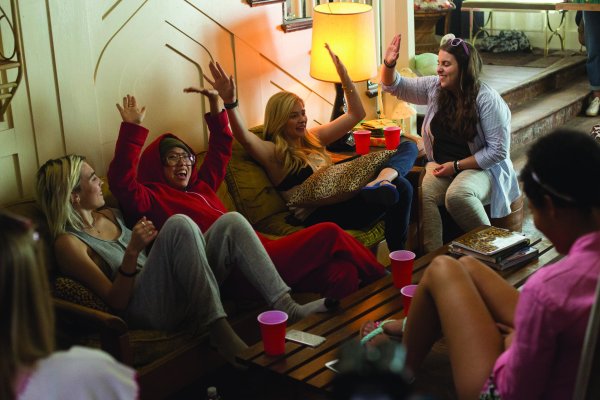 The True History Behind Neighbors 2: How American Sororities Got Their Start
Next Up: Editor's Pick