Not much is known about the man who stabbed several commuters, one of them fatally, at a train station in a suburb of Munich on Tuesday morning. German police say he was 27 years old, a German citizen and “expressed political motivations.” Witnesses recalled him shouting the Arabic phrase Allahu Akbar – “God is great” – as he slashed at people on the platform with a knife.

With the suspect now in custody, it will soon become clear whether this was an act of homegrown Islamic extremism – and whether Germany’s streak of good fortune in countering such violence has finally come to an end.

Until now, no Germans have ever been killed by a homegrown jihadist. Among the larger nations of Western Europe, this record is — or was — unique, and it seemed especially remarkable considering that Germany has the largest Muslim population in the European Union. As TIME reported last month, the German strategy in fighting extremism has tended to focus on integration, mentorship and other programs that sought to make Muslims feel welcome in the broader community.

Over the past year, German officials have struggled to explain why this strategy has been so successful, in part because a lot of it comes down to a run of good luck that Germans are afraid to jinx. “Everybody can see that these conflicts are coming,” Hans-Peter Friedrich, a former Interior Minister in the government of Chancellor Angela Merkel, told TIME last fall, soon after a group of militants loyal to ISIS killed 130 people in Paris. “Look to Paris,” Friedrich said. “[This is] what happens when you cannot integrate them. Look at Brussels.”

In the Belgian capital – which also serves as the capital of the E.U. – terrorists loyal to ISIS staged a series of bombings in March, killing 32 people and wounding hundreds of others. The stabbings in the town of Grafing outside Munich were, of course, not in the same league. It appears to be a lone attacker with no access to weapons more lethal than a kitchen knife, and police said there is no evidence he has ties to ISIS or any other terrorist group.

But the Munich train attack may still confirm German fears that the threat of terrorism will not pass them by for much longer. After a million asylum seekers arrived from the Middle East and Africa last year, 66% of Germans said they expected ISIS to strike in their country by the end of 2016. In the same nationwide survey, only 17% of respondents clung to the belief that this would not happen.

Hans-Georg Maassen, the head of Germany’s domestic intelligence agency, said earlier this month that law enforcement needs more resources to combat a “worsening security situation,” in particular the threat posed by the hundreds German citizens who have joined ISIS in Syria and come home. Every day, Maassen’s agency receives several tips about jihadist attacks being planned in Germany, he told a security conference in Berlin.

“To give you an impression, we’re watching 90 mosques out of the many mosques here in Germany,” he said. “Those are the mosques where we suspect there is an extremist, Islamist element in the community.”

In Berlin, the mosque that police officials most often point to as a platform for extremist preachers is called Al-Nur, a modest white building in the diverse, mostly working-class neighborhood of Neukölln. During a sermon delivered at its pulpit last year, a visiting imam from Denmark told congregants that Jews should be killed “to the very last one.” He was subsequently convicted of hate speech and ordered to pay a fine.

The mosque came under a lot more scrutiny after that, and in the wake of the ISIS attacks in Paris and Brussels, some of its preachers worried that Germany’s traditional tolerance toward Muslims could be waning. “People are scared,” Shaykh Abbas, an imam who was visiting Berlin from his home in London, told me after his sermon at Al-Nur last month. After the slaughter in Brussels, he said, “people can say that all Muslims are not good, that there is a general defect in our community.”

At demonstrations across the country, anti-Islamic groups have begun making such claims with increasing force. The right-wing party known as Alternative for Germany, or AfD, has even called for a ban on Muslim veils and minarets, titling one of the chapters in its recent manifesto “Islam is not a part of Germany.” During next year’s elections, AfD is widely expected to become the first far-right party to enter the German parliament since the end of World War II. It currently enjoys the support of around 14% of the electorate, according to the most recent polls.

For liberal lawmakers like Ali Bas, who oversees efforts to integrate Muslims in western Germany, last year’s influx of migrants has made it much harder to preach tolerance. “It changed the tone of how people talk about minorities here,” he told me last month in an interview. “To make people understand that most Muslims want to live in peace, it got more difficult.”

So far, it is too early to tell whether the stabbing in Munich could accelerate that trend, Bas said by phone on Tuesday. “We’ll have to wait for the details, to see if this is confirmed.” If the investigation does find that this attack was motivated by religious extremism, it could mark a turning point for Germany. Within their borders, the prospect of Islamist violence may long have seemed like a matter of time. But that will not make it any easier to accept. 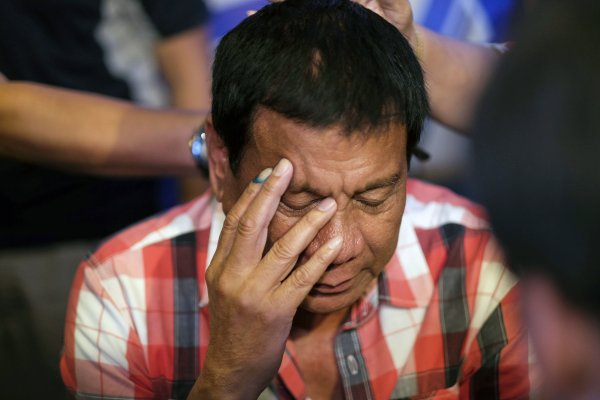 Philippines' Rodrigo Duterte Breaks Down at Parents' Tomb After Winning Election
Next Up: Editor's Pick