With Edible Nail Polish, KFC Has Taken 'Finger Lickin' Good' Where No One Expected

KFC decided to break out from its identity as a food chain and redefine ‘Finger Lickin’ Good’ with its latest offering: edible nail polish.

The chicken chain announced it will release two flavors/colors of the nail polish — in Original and Hot & Spicy — as a promotion in KFC Hong Kong, AdWeek reports. Though this does seem hard to believe, as there should not be demand for nail polish that tastes like chicken, there is no indication that this is a prank.

Ogilvy & Mather reportedly developed the edible polishes from natural ingredients with McCormack, the chain’s secret spice source. KFC explained in a statement that to use the product, “consumers simply apply and dry like regular nail polish, and then lick—again and again and again.”

People in Hong Kong can try the two types out and vote on which flavor goes into mass production. For what it’s worth, Hot & Spicy comes in a bolder, somewhat bright persimmon color, and the Original is a bit more understated in a neutral, light flesh color (almost chicken flesh-color, which is an uncomfortable thought). Both have sparkles. Fashion publishers have begun to report on the news.

KFC has released the above music video celebrating the breakthrough in chicken technology, in which one person displays his nails while dancing, and another licks hers in shots when she is not solving a rubix cube. 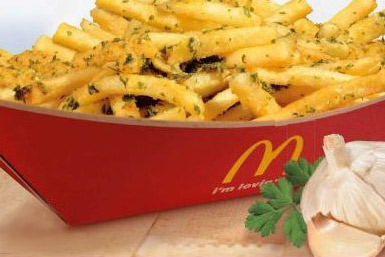 McDonald's Is Testing Garlic Fries
Next Up: Editor's Pick